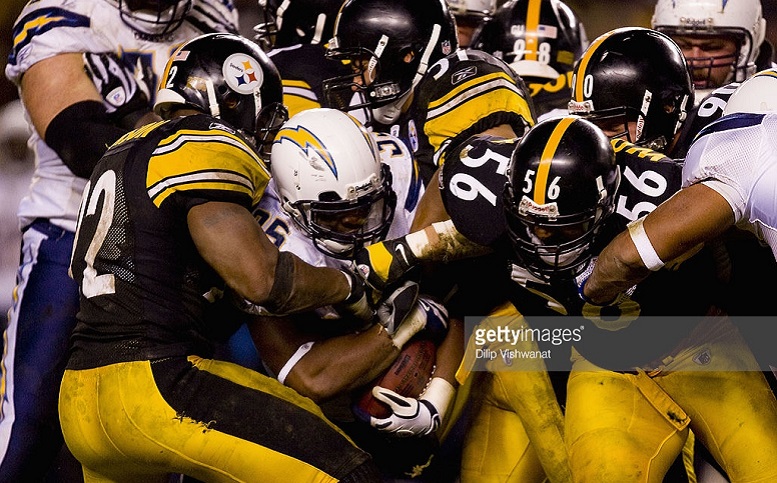 Arguably the greatest defensive unit in the illustrious history of the Pittsburgh Steelers didn’t get enough love from Bleacher Report and writer David Kenyon when it comes to ranking the top defenses since 2000.

Kenyon took on the arduous task of trying to rank the eight best units from the first 20 years of the new millennium, and despite the challenges of doing so, he came up woefully short on the 2008 Steelers’ unit.

According to Kenyon’s rankings, the ’08 Steelers’ unit ranked No. 6 out of the top 8, missing the top 5 entirely, which is just insane.

That 2008 unit led the NFL in fewest points allowed, total yards allowed, passing yards allowed and was second in rushing yards permitted in the ’08 season, leading the Steelers to a Super Bowl win over the Arizona Cardinals that season. Safety Troy Polamalu and linebacker James Harrison earned Pro Bowl and All-Pro nods that season, while Harrison won the NFL’s Defensive Player of the Year award, thanks to his franchise-record 16.0 sacks.

Though it didn’t have a ton of headliners outside of Polamalu and Woodley, that 2008 unit was simply fantastic top to bottom in then-defensive coordinator Dick LeBeau’s scheme. Ends Aaron Smith and Brett Keisel and nose tackle Casey Hampton did a great job shutting down the run, while LaMarr Woodley was the perfect bookend for Harrison. Inside, Larry Foote and James Farrior roamed all over the field, while cornerbacks Ike Taylor and DeShea Townsend shut down the opponent’s passing game, and safety Ryan Clark was the perfect piece to play next to Polamalu.

Despite greatness in a number of statistical categories, Kenyon ranked the Steelers’ 08 unit sixth.

“We honestly feel terrible that the Cincinnati Bengals and Cleveland Browns played both the Ravens and Pittsburgh Steelers twice in 2008. That had to be absolutely miserable,” Kenyon writes. “Pittsburgh’s defense was slightly more suffocating. Star safety Troy Polamalu and linebacker James Harrison highlighted the unit, which allowed a league-low 3.9 yards per snap and 13.9 points per game. Additionally, the Steelers held opponents to the lowest third-down conversion rate (31.4) in the NFL and finished second in sacks (51). To close the season, Harrison’s pick-six in Super Bowl XLIII was a key moment in the Steelers edging the Arizona Cardinals.”

Though he writes all that, Kenyon had that Steelers’ unit ranked behind the 2013 Seattle Seahawks and the Legion of Boom, the 2004 Buffalo Bills, the 2015 Denver Broncos, the 2002 Tampa Bay Buccaneers and the 2000 Baltimore Ravens.

The only real team I have a gripe with in the top 5 is the 2004 Bills. Sure, that group was fantastic, but the Bills didn’t make the playoffs and Kenyon highlights Buffalo holding the Cleveland Browns to 26 total yards in a Week 14 matchup that season. Cleveland’s quarterback that year? Luke McCown. Come on.

I never truly thought I’d see the day the Steelers’ 2008 defensive unit would be underrated and overlooked, but here we are.