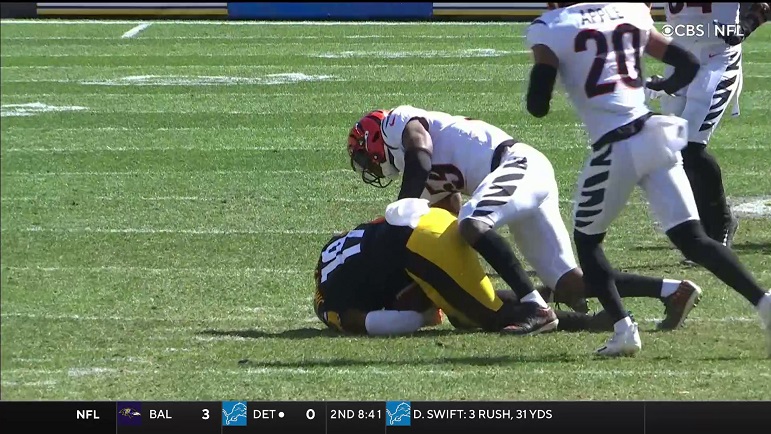 There is not too much good to talk about on this Monday following the Pittsburgh Steelers Sunday home loss to the Cincinnati Bengals. There is, however, some positive injury update news to pass along on this Monday.

According to Ian Rapoport of the NFL Network on Monday, Steelers wide receiver JuJu Smith-Schuster is considered day-to-day after undergoing tests on the rib or ribs that he injured in the first half of Sunday’s loss to the Bengals. His report indicates that Smith-Schuster has been diagnosed with bruised ribs.

While were not positive, it certainly seems like Smith-Schuster may have suffered his rib injury with 4:04 left in the second quarter after making a catch on a 2nd-and-10 play from the Bengals 39-yard line. Smith-Schuster played just 33 offensive snaps on Sunday and was spotted on the field after halftime for just one play.

Steelers head coach Mike Tomlin will next meet the media on Tuesday and at that time we should learn more about Smith-Schuster’s status and if he has a chance to play on Sunday against the Green Bay Packers.

Against the Bengals on Sunday, Smith-Schuster caught three passes for 25 yards. For the season, he now has 13 receptions for 118 yards. He also has one rushing touchdown on the season.