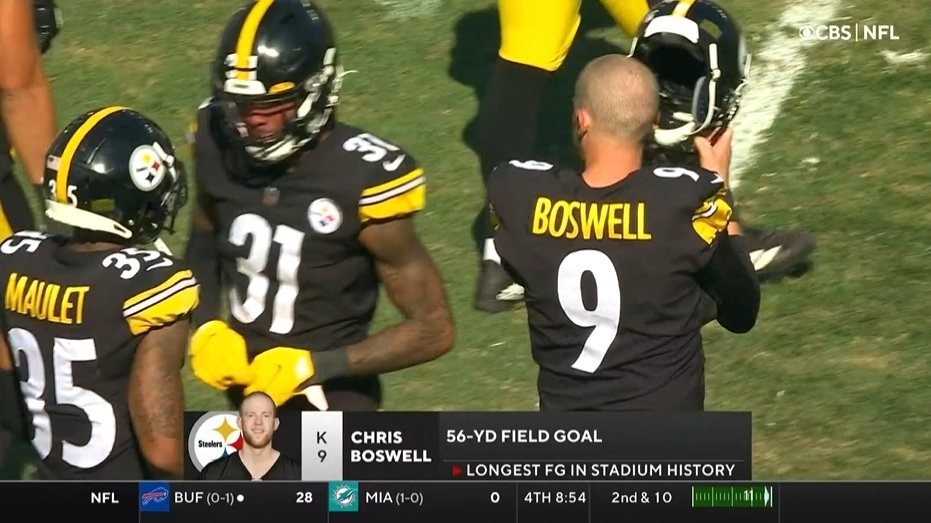 I believe special teams are an underappreciated facet of the game where one big play can shift momentum or even determine the game winner. So, I’ll provide an overview of how the Steelers special teams performed relative to their opponent each week. If you read my game perspectives, then you will recognize the format.

Chris Boswell kicked off four times. The first three were touchbacks. The Steelers did not want to risk a return. Boswell kicked short to the five-yard line down 23-17. Henry Ruggs the ball 22 yards to the 27 where James Pierre and Justin Layne tackled him. The return avoided getting stuck behind the 25-yard line. The Raiders average starting position after kickoffs was their own 26-yard line.

Daniel Carlson kicked off seven times. Ray-Ray McCloud returned the opening kickoff 28 yards to the 32-yard line. The next, McCloud only reached the 22 after another Carlson kickoff fielded at the four-yard line. McCloud caught Carlson’s final kick of the first half four yards deep in the end zone. He tried to make something happen and went 28 yards but just reached the 24. In the second half, McCloud returned Carlson’s first kick 18 yards to the 17-yard line. As the game wore on, Carlson kicked deep in the end zone to prevent and potential return with touchbacks. The Steelers average starting position was their own 24-yard line. Although McCloud edged Ruggs in return average by a yard per return (23.0 to 22.0) I give the edge to the Raiders since the Steelers started with the ball behind the 25 on average. Advantage Raiders.

Pressley Harvin III punted four times averaging 49.3 yards a punt. His first punt only went 38 yards but was fair caught at the 16-yard line. Harvin punted the next from his 33-yard line. The 59-yard punt went to the eight. Robert Spillane and Justin Layne tackled Hunter Renfrow at the 18-yard line to flip the field. Then Harvin punted a 42-yarder downed at the three-yard line. His final punt was 58 yards to the eight. Renfrow managed to return it 16 yards to the 24 with Jamir Jones tackling him. Three of four punts gave Raiders starting position behind the 20 with a net 42.8 yards per punt. A significant improvement from last week.

A.J. Cole also punted four times. His first went 55 yards to the ten-yard line. Ray-Ray McCloud returned it to the 25-yard line. However, official flagged Ray-Ray for unsportsmanlike conduct pushing the ball back to the eight, His next punt went 40 and McCloud fair caught the ball at the 13-yard line. Cole punted 50 yards, but the touchback netted only 30 yards on that punt. Cole’s final punt went 45 yards to the 17, McCloud returned the punt to the 32-yard line. McCloud’s penalty put the Steelers in a deep hole early in the game. Ben threw an interception on the next drive from the 22-yard line leading to the Raiders first score. The Steelers would have had a starting position at the 25 if not for the penalty. So, Harvin’s superior punting overshadowed by the mental lapse.  Advantage Raiders.

Chris Boswell set a Heinz Field record for longest field goal with his 56-yard kick. Boswell also converted both extra point attempts. Carlson made all four of his field goals and converted two extra points. With no misses and more opportunities, Carlson scored 12 of the Raiders 26 points.   Advantage Raiders.

PEEK TO NEXT WEEK

The Cincinnati Bengals selected kicker Evan McPherson in the fifth round of the 2021 NFL draft. McPherson hit 53-yard field goals in consecutive weeks and is perfect on his first three field goal attempts in his nascent career. His holds the Alabama high school football record with a 60-yard field goal. Punter Kevin Huber is in his 13th season with the Bengals.  He’s averaged 45.3 yard per punt in his career and 45.2 yards in the first two games this year. However, 2020 was his best season for punting average with 47.4 yards per punt so his leg is still strong.

Brandon Wilson returned 45 kickoffs with two touchdowns in his first four years with the Bengals. Wilson holds a strong 27.8 yards per kickoff return coming into this season. The Vikings and Bears minimized Wilson with one return for 11 yards against Minnesota and averaging just 18 yards on three returns against the Bears. He is still dangerous though. Will Danny Smith give him a chance to hurt the Steelers with a long return?

McPherson has a strong leg and veteran Kevin Huber is savvy so Ray-Ray McCloud may not get many chances to return the ball. I’d love to be wrong and see him return a punt or kickoff to the house.

Chris Boswell is perfect through two games. Meaning the Christian Kuntz snaps to Pressley Harvin are clean enough not to warrant a mention in either game. Harvin improved in week two.

The Bengals have two dangerous returners. Danny Smith may want to consider Boswell kicking off deep for touchbacks and Harvin to put hang time on his punts to force fair catches. McCloud is due to break a long return. That may be the spark needed for the Steelers offense to score early.

I always like to offer a music selection. Looking for a complete game against the Raiders. Here is Kick It In the Sticks by Brantley Gilbert