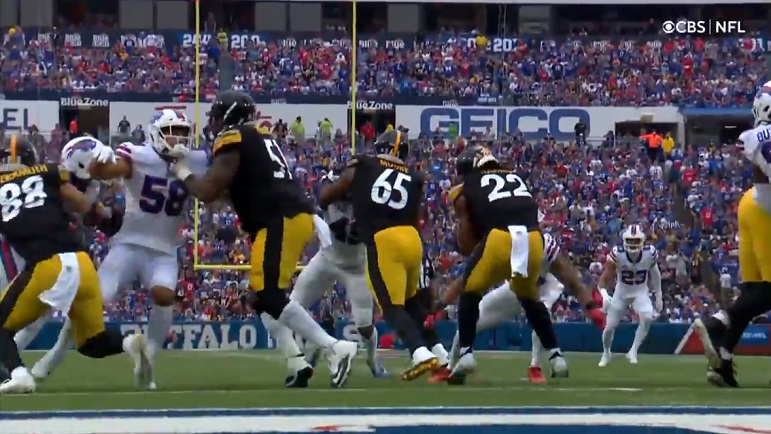 Pittsburgh Steelers rookie running back Najee Harris made his official NFL debut last Sunday against the Buffalo Bills and he wound up playing every offensive snap in that contest on his way to registering 49 total yards from scrimmage with 45 of those coming on 16 total carries. While Harris’ NFL debut did include a few nice runs, it also included a few poor ones on his part.

Perhaps the most noticeable failed run that Harris had on Sunday was a counter play with 10:53 left in the second quarter. That play originated from the Steelers own 7-yard-line and it was a 2nd-and-10 run. On the play in question, Harris made it through a nice hole before quickly getting hit by Bills cornerback Taron Johnson just beyond the line of scrimmage. Johnson, who weighs right around 192 pounds, easily took down Harris, who claimed back in late July that he weighed 240 pounds. The play resulted in a gain of just two yards and on Friday, Harris was asked about that specific play and what went wrong for him during it.

“So, I mean, the Buffalo Bills had a good defense,” Harris explained on Friday. “They always had a down safety, so that was the free hat. I didn’t really know where the free hat was, I just know that it was going to be a free hat. I mean, they have more numbers than us in the run game. They put another guy in the box. So, I saw him last minute and then he just made a good tackle. Really, it was bad on my part because I was one-on-one, and I should have made the guy miss. But like I said, there was a free guy. I didn’t know where he was at, but it was blocked perfectly. So, really that was just me not making a guy miss.”

The play in question is below and it is an endzone view at that. As you can see, the counter run was blocked well and left Harris with really just one player to account for at the second level, Johnson. Had he found a way to elude Johnson, only free safety really remained for him to beat. At worst, this run would have netted 10-15 yards and possibly more.

Najee Harris talked about this failed run on Friday and I will bring you more on that in a bit. #Steelers pic.twitter.com/V1aOFqMwHd

Overall, Harris not making big yardage out of that particular second quarter run isn’t a big deal. After all, it was his first NFL game and just his sixth overall carry in it. He’ll get better and he knows he learned quite a bit in his Sunday debut against the Bills that will help him out moving forward.

“Just having everything slow down and then making the jump from what to improve on from first game to second game, it’s part of the sport,” Harris said on Friday. “You know, nothing’s going to be how you want it first game. At anything. Especially when I just started something. If you start anything, it’s not gonna be perfect the first time. All that matters about is if you’re improving and keep getting better from the first time you started and where you’re at the second time and the third time and all that stuff.”

Harris second NFL game will be on Sunday at Heinz Field in Pittsburgh against the Las Vegas Raiders and hopefully he’ll have a much better showing overall in that contest. Odds are good that will be the case.