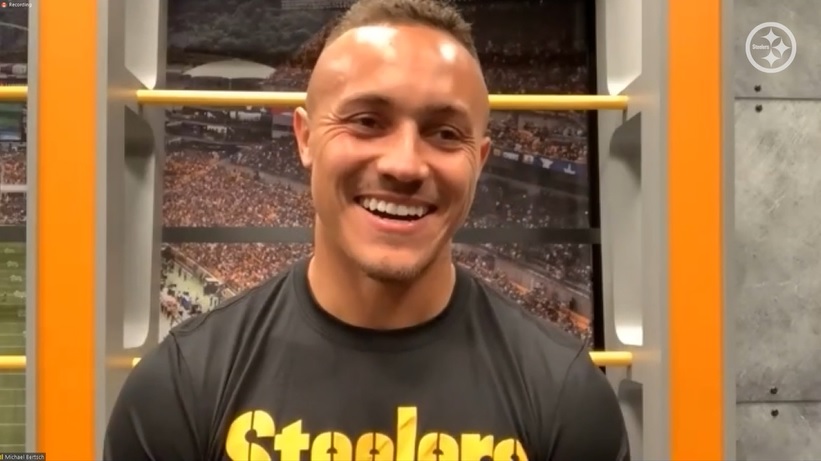 Danny Smith might not look it but few coaches fire up his guys the way he does. The gum-chomping, chiclet-spittin, fiery Smith got the Pittsburgh Steelers’ special teams turned around in the second half of Sunday’s win over Buffalo. After an ugly first half that saw a 75-yard kick return and near punt block, Miles Killebrew blocked a Matt Haack punt that led to a Steelers’ score, giving them a two-score lead as part of a fourth quarter flurry to jump ahead of the Bills.

Speaking with reporters today, Killebrew credited Smith for having that unit ready to make a play.

“Danny Smith is full of energy,” he told reporters Monday. “I know you might see him on film and you think, he looks like he’s old. No, he is full of energy. He has probably more energy than half the guys on the team. But he’s very wise. He’s going to prepare us and he’s going detail our work in a way that, by the time the game comes, we’re not bogged down with a bunch of little things. What could happen, what couldn’t happen?”

Killebrew and the players ultimately executed, that matters more than anything, but it was Smith who drew up a great blitz scheme to create miscommunication along the Bills’ interior, sending Killebrew free up the middle. Killebrew used great technique to block the punt, palms/thumbs down and running to the side in order to avoid a penalty for running into the punter. Ulysees Gilbert III quickly found the ball and scored, putting the Steelers on top 20-10.

While the first half was ugly, Killebrew noted Smith does a good job of ensuring his unit doesn’t get too high or too low. Like Mike Tomlin, the idea is to avoid the roller coaster of emotions that can occur during a game. That starts with good preparation Monday through Sunday.

“We’re very prepared come Sunday. And that’s something that he brings to the table. Almost a calmness come Sunday.”

Killebrew also credited the players around him for making his job easier too.

“Not to mention we have veterans on our team that makes it a very easy environment to become acclimated with and want to perform well in.”

That includes guys like Derek Watt, the team’s newest special teams captain who had a tackle in Sunday’s opener. There’s been a fair bit of turnover on special teams over the last year, including the notable release/loss of Jordan Dangerfield, but the new faces have stepped up. That’s how a guy like Jamir Jones earned his roster spot on hat yesterday afternoon. Pittsburgh brought Killebrew in as one of those veteran pieces and played to expectations to help Pittsburgh start their season off on the right foot.

All under the Smith’s leadership, the long-time coach who has been better than maybe any other at scheming up punt rushes.