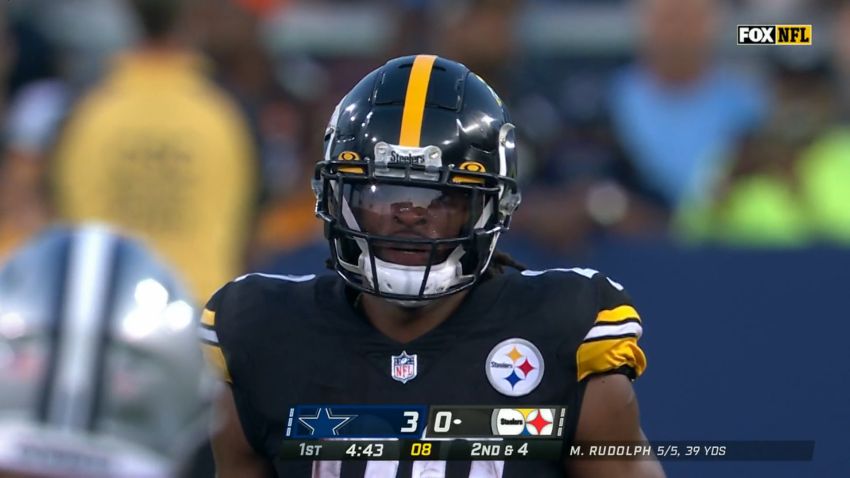 Going through the projected matchups in lead up to the Pittsburgh Steelers’ first game of the regular season against the Buffalo Bills, one can’t but help turn to rookie first round RB Najee Harris with anticipation as to how he will fare in his first regular season game. Harris has been as-advertised during the preseason, showcasing that power and ability to push the pile as a physical runner in-between the tackles while also showing the elusiveness and pass catching skills that are rare for a 230lb running back to possess. Harris has also been the epitome of a workhorse runner in his preseason action, playing a vast majority of the snaps with the first-team offense.

Still, Harris only mustered 42 yards on 13 carries (3.2 YPC) in his limited preseason action, making his biggest impact as a receiver out of the backfield on a 46-yard catch-and-run against the Detroit Lions. As mentioned earlier, Harris has been productive in terms of getting what is blocked for him upfront and creating as a runner himself, seemingly always falling forward for extra yardage and having the ability to make defenders miss. However, there were several instances where the blocking scheme upfront failed, and Harris got caught behind the line of scrimmage for lost yardage on the play, raising the question as to how effective he can be on the ground if the offensive line play is poor.

Harris recognized in an interview during the preseason that it is his job to make the first defender miss and that he supports his offensive line even when blocking is sub-optimal. He also stated in a recent post-practice interview that he knows that he was brought to Pittsburgh to bring back the running game to what it once was after a disastrous year in 2020 where Pittsburgh landed at the bottom of the league in the rushing department. He will get his shot on September 12 in Buffalo against a Bills team that is shaping up to be a viable contender in the AFC but appears to be exploitable on the ground.

Traditionally, the strength of the Buffalo Bills defense the past several years has been in the secondary and its ability to defend the pass. While I recently conducted a film room on the improvements the Bills have made up front with their pass rush, they have been beatable on the ground. Last season, Buffalo surrendered nearly 120YPG on the ground, allowing 4.6YPC and 21TDs scored. The yards per attempt and the touchdowns scored ranked near the bottom of the league in comparison to other rush defenses, meaning that Buffalo can be susceptible to being beaten against the run.

Pittsburgh has played the Bills the last two seasons. In 2020, Pittsburgh only mustered 47 yards rushing on 17 carries (2.8YPC) which came during the end of the season with the Steelers virtually abandoned the running game and opted for the short, quick passing game. In 2019, Pittsburgh rushed for 51 yards on 14 attempts (3.6YPC) but had success with starting running back James Conner toting the rock eight times for 42 yards (5.2YPC). A big reason the team abandoned the running game was due to the fact that Buffalo sold out to stop the run in the second half to force then starting QB Devlin Hodges to throw the ball. After tossing four INTs, Pittsburgh wasn’t in position to run the ball, having to try and come from behind in the fourth quarter, but ended up falling to Buffalo.

Looking at the past two games against the Bills in lead up to this weekend’s matchup, it is imperative that Pittsburgh establishes a ground game and keeps Buffalo’s pass rushers at bey. Last season, Pittsburgh proved they just couldn’t run the football at the end of the year, and the season before without ben Roethlisberger, they still managed to have success running the football dispute not maintaining drives with Hodges at the helm.

Seeing that Pittsburgh will be rolling out a brand-new starting lineup across the offensive line compared to the start of the 2020 season with two rookies making their first professional starts, turning to the run game early on to allow the offensive line to settle in and keep pressure off of Ben having to throw all game against a strong Bills pass defense will be key for a chance at victory. Specifically, Najee Harris will need to establish himself as a runner early, posting a successful run rate over 50% much like the great Dave Bryan has referenced often this offseason to set the rest of the offense up for positive down and distances on second and third down.

Should Pittsburgh prove to be effective at picking up 4+ yards on the ground on first down to put Pittsburgh in favorable position on second and third down, the playbook could be opened up in terms of the play action passing game, jet sweeps and misdirection, as well as the screen game to keep the defense on their toes rather than sitting back in coverage and letting their pass rushers hunt the QB on third-and-long. Buffalo’s defense is well-coached and has improved along the trenches, but given their past tendencies and the focus of getting Najee Harris involved early, I would expect Harris to have a fairly productive day on the ground.

What are your thoughts on rookie RB Najee Harris heading into the Week 1 matchup against the Buffalo Bills? Do you think that he will be able to put together a successful debut against their defense? Do you think that the offensive line will hold back his chances of putting together a strong performance? Please share your thoughts in the comments section below and thanks again for reading!