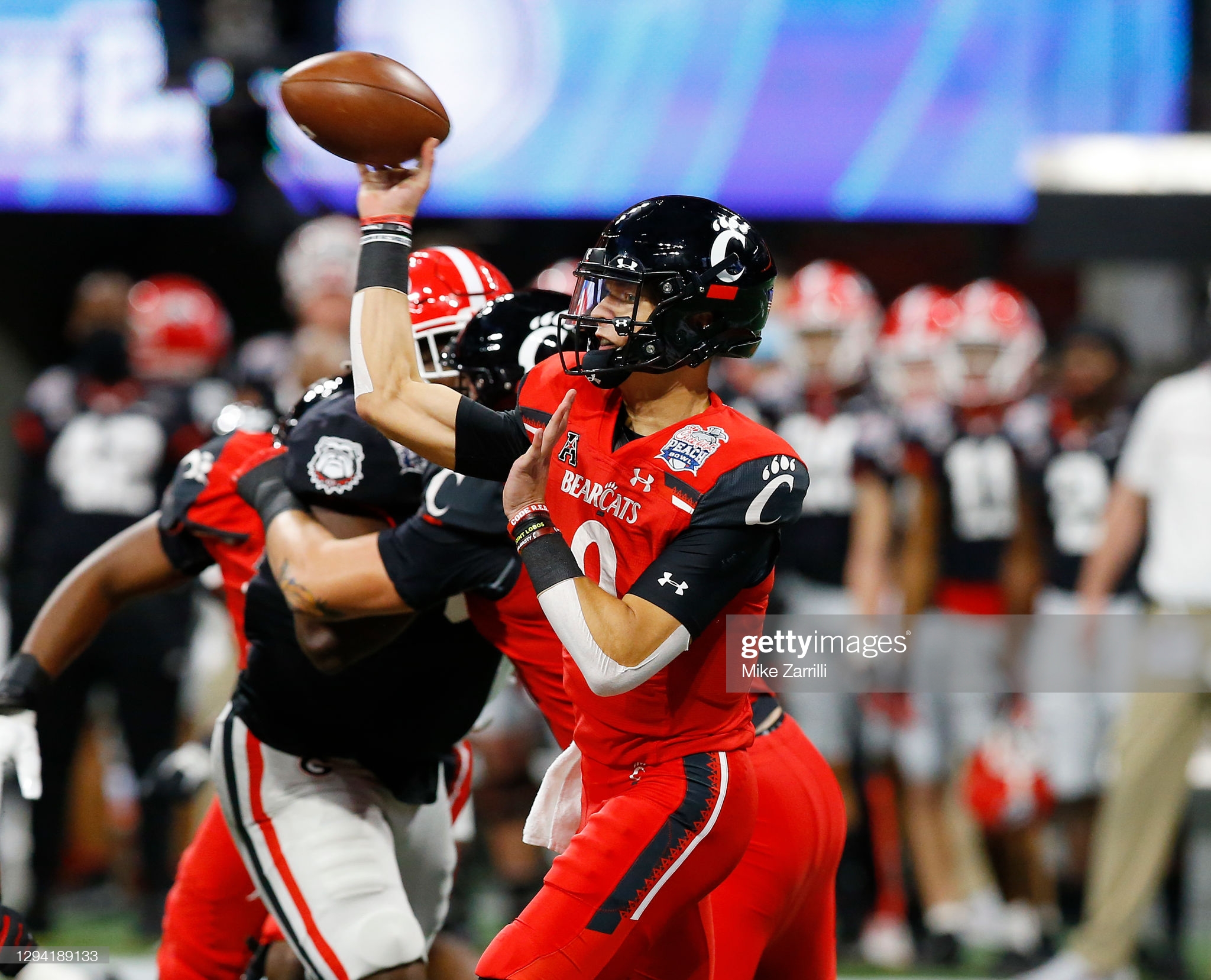 College football returned in full over the last 48 hours, bringing with it some high-profile and entertaining matchups like Minnesota giving No. 4 Ohio State a major challenge, and Saturday night’s primetime showdown between No. 3 Clemson and No. 5 Georgia.

Among names floated as possible first-round picks in the 2022 NFL Draft, the quarterback class did not inspire in its 2021 season debut, even drawing some unfavorable comparisons to the 2013 class that was headlined by EJ Manuel, Geno Smith, and Mike Glennon. Some names went as exceptions to that, shining or showing improvements in key areas. Two of those names happened to be selections to the Pittsburgh Steelers in mock drafts released prior to the first games of the season.

In the first, Vinnie Iyer at Sporting News sends the Steelers to the AAC to find its next franchise face, being the latest writer to select Cincinnati QB Desmond Ridder for Pittsburgh at 20th overall. Iyer writes:

“Ridder has proved to be a strong, tough leader for the Bearcats with natural dual-threat traits of big arm and smooth running. He’s the kind of modern successor for Ben Roethlisberger the Steelers need under Mike Tomlin.”

Ridder was one of college’s best passers over the weekend, completing 20-25 passes in his debut for 295 yards and four touchdowns, with one interception. Ridder’s play led the Bearcats to a 49-14 thrashing of Miami (Ohio), coincidentally the alma mater of current Steeler franchise QB Ben Roethlisberger. In it, Ridder was almost perfect, while showing plenty of arm talent and his ability to move in and out of the pocket, with six rushes for 31 yards and another touchdown.

Ridder is one of the best running QBs among possible first-round names, but he has a long way to go to match the running ability of Liberty’s Malik Willis, who also began his season on Saturday, against Campbell. Against the weaker competition, Willis lit up the Camels, a welcome performance for Steeler fans who checked out the mock draft over at Drafttek earlier in the week that had Willis as the team’s pick 21st overall. The website first acknowledges other major needs along the offensive line and in the secondary, before stating this about the selection at QB:

“The hole that looms large beyond those issues is the quarterback of course. Ben Roethlisberger has started for this team since 2004 and looks to be on his farewell tour. His long-term replacement is not on the current roster. Malik Willis is an electric young player who has put the fledgling Liberty program on the map. He’s a dual threat QB with the ability to excel as a passer in an NFL system. It’s been a while since the Steelers swung for the fences at QB so we’ll be looking at a wide net of prospects leading up to the 2022 Draft over the next several months.”