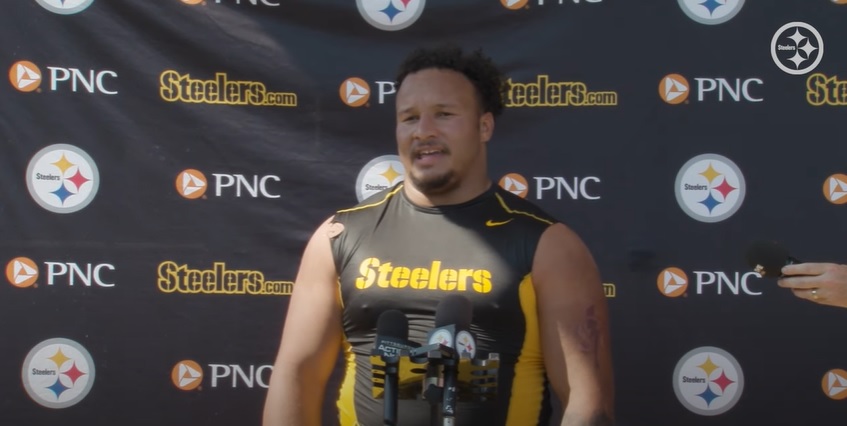 Kendrick Green isn’t supposed to be Maurkice Pouncey. That’s too much pressure on any rookie and Green has the right to be his own man. But that doesn’t mean Green can’t watch the Steelers’ old #53 to get himself ready for his first season in the league.

“When I got here in the summer, just trying to learn the offense,” he told the media via the Steelers’ YouTube channel. “There’s a bunch of Maurkice Pouncey tape up there. I like the way he plays. He really tries to play physical, put his hands on guys, and that’s something I’ve been trying to work on myself and I need to add that to my game as well.”

Green’s point about Pouncey’s hand usage “getting hands on guys” is critical. While Pouncey was much taller than Green, 6’4 vs 6’1, their length was almost identical. 32.5 inches for Pouncey, 32.25 for Green. That can pose an issue in pass protection and Green has taken his lumps there this summer, struggling against power and bull/long-arm rushes. Overcoming that is a matter of technique and winning with your punch early. If you’re late or try to re-punch and the defender is in your chest, you’re in for a bumpy ride.

Green said he also noticed how much pride Pouncey took in his blocking.

“He wasn’t doing it just because it was his job. You definitely didn’t get that vibe when you’re watching the film. He was going out of his way to be violent. That’s what you appreciate in an offensive lineman.”

And Green has done similar, racking up multiple pancakes in the Steelers’ weekend win over the Lions.

Kendrick Green still has a lot of room to grow. But man, he is going to piss off some defenders this year. Steelers wanted to get back to physical roots. He definitely checks that box. #Steelers pic.twitter.com/dkvKXiN3PU

Though Green has plenty to work on, he is all but certain to be the team’s starting center when the regular season kicks off. From Day One, he’s run as the first-team center, save for three practices he missed with excused absences. Just as Pouncey was, Green will be the team’s Week One starter.

He’ll take his lumps along the way as a rookie who left school early and didn’t have much experience at center. But he’s the team’s best scheme fit, their best athlete, and their best option.