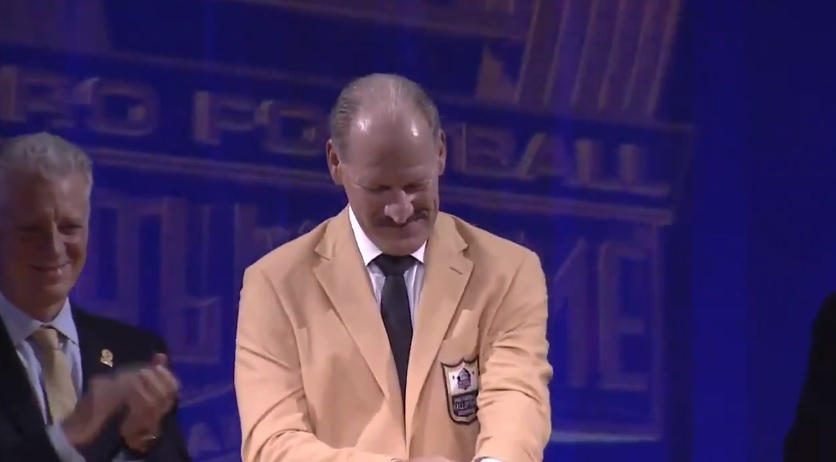 It’s a special week for Steelers’ Nation. Five Steelers are being enshrined into the Hall of Fame, officially etched into football history with the Hall’s ceremony. On Friday night, the 2020 and 2021 Hall of Fame class received their gold jackets they’ll wear tomorrow, handed out by the person chosen to present them into Canton.

Here’s video of each. Bill Cowher from Art Rooney II.

Alan Faneca receiving his from his son, Burton. Teammate Hines Ward will be his official presenter into the Hall.

A family moment like no other.@afan66 receives his Gold Jacket from his son, Burton. #PFHOF21 pic.twitter.com/Jn1oaf6pcd

And here is Shell receiving his jacket from his daughter April, who will present him into the Hall over the weekend.

Cowher is part of the 2020 Class that couldn’t be enshrined last season due to COVID. Faneca finally got in this year after being a six-time finalist. Shell was part of the Hall’s expanded Centennial class, a long overdue selection. There are still other Steelers from the 70s, like DT L.C. Greenwood, deserving of their place in Canton.

Bill Nunn will be inducted posthumously as the league’s 26th contributor into the Hall.

Troy Polamalu did not attend tonight’s ceremony but reportedly, will be in Canton to make his Hall of Fame speech tomorrow. Polamalu tested positive for COVID late last month.

Shell will be the first Steeler to speak on Saturday, seventh in the lineup. Polamalu will be the next, the tenth of the night, with Cowher the 12th and final speech of the evening. On Sunday, Faneca will be the sixth of seven, one spot ahead of Charles Woodson. Nunn will be honored in a video ceremony.