The Pittsburgh Steelers have been busy adjusting their offseason roster again these past few days, and now the smoke is beginning to clear following the team trading for inside linebacker Joe Schobert and restructuring the contract of defensive end Stephon Tuitt, it’s time to look at the team’s updated salary cap situation, especially with several other Steelers blogs and media outlets posting blatant misinformation concerning the topic.

Let’s start first with what the NFLPA shows on Monday morning for the Steelers. They have the Steelers with 93 players under contract for the 2021 season, and the team $11,832,604 under the cap. The NFLPA has yet to account for the Steelers trading for Schobert and the restructuring of Tuitt’s contract, however.

Based on a report by Pro Football Talk on Sunday, Schobert’s cap charge for 2021 should be $1.88 million, PFT reports that the Jacksonville Jaguars are paying half of the $7.3 million that Schobert is scheduled to earn in 2021, and that the Steelers converted $2.36 million of his remaining base salary into a signing bonus, in order to shrink his 2021 cap charge.

Assuming Schobert’s 2021 cap charge is indeed $1.88 million, the Steelers will use $1.03 million in additional salary cap space after top 51 roster displacement takes place. Schobert’s entrance into the top 51 knocks a $850,000 salary out of it.

As for Tuitt, the Monday morning report by Field Yates indicated that his restructure will clear $6.34 million in 2021 salary cap space. As mentioned in my post on that report, that means the Steelers likely added three voidable years to Tuitt’s contract as part of that restructure.

The net result of Schobert’s addition and the restructure of Tuitt’s contract should create $5.31 million in additional salary cap space in 2021 for the Steelers. When that amount is added to the $11,832,604 the team had entering Monday, it results in the team now having $17,142,604 in salary cap space.

As the chart shows below, the Steelers now have nearly $5 million in usable salary cap space as of Monday evening. It is worth noting, however, that the team is still expected to sign outside linebacker T.J. Watt to a very lucrative contract extension in the coming weeks. If they do, and if the result of that extension includes Watt’s 2021 cap charge being greater than $10.089 million, it will eat into the extra usable salary cap space the team is estimated to now have.

As noted several times previously in posts, the Steelers could and might still decide to restructure the contract of kicker Chris Boswell at some point between now and the start of the 2021 regular season. That restructure, if indeed done, would free up a little more than $1 million if no voidable years are added.

As you can see below by my numbers, other Steelers’ blogs and Twitter accounts are way off the mark when it comes to their recapping of the team’s current salary cap situation. This is a result of them not having a grasp of what counts and doesn’t count against the Rule of 51, in addition to having a few wrong contract amounts and poor accounting habits.

The Steelers will likely be signing Watt to a very lucrative extension in the coming weeks and if they do, it will be interesting to see how much his 2021 cap charge winds up increasing, if any. We’ll make sure to pass along Watt’s new contract details as soon as they are known. 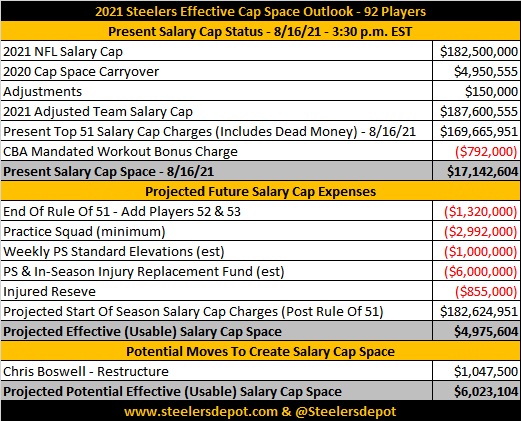