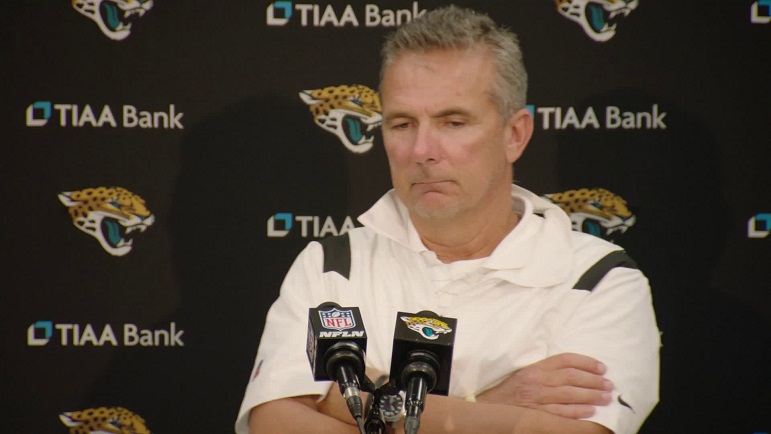 (Update: 10:10 AM). The Jaguars are indeed paying a portion of Schobert’s salary. $3.65 million of it according to Pro Football Talk.

Per PFT, Schobert converted “$2.36 million of his remaining salary to a signing bonus, in order to shrink the cap charge for 2021.”

This means the Jags are paying 50% of his salary while the Steelers pay the other half.

Depending on whether or not the Steelers made the 2021 roster bonus go away via the restructure, this could be what Joe Schobert's contract looks like now. #Steelers pic.twitter.com/AGyZ0xjtmv

Will the Jacksonville Jaguars be paying any of the 2021 base salary that new Pittsburgh Steelers inside linebacker Joe Schobert following the recent trade the two teams made? Nobody really seems to know for sure at this point, and that includes Jaguars head coach Urban Meyer

After the Jaguars Saturday night preseason game, Meyer was asked about the Schobert deal and if it included Jacksonville needing to pay any of the $7 million 2021 base salary the linebacker is scheduled to earn.

Urban Meyer on Joe Schobert. Despite reports to the contrary, he thinks the Jaguars might be paying some of the 2021 salary but really is not sure. #Steelers pic.twitter.com/Os8iMfJ5XK

“I believe we are [paying some of the salary],” Meyer said. “That’s a Trent [Baalke question] . . . I don’t want to say something that’s not true.”

So, why did the Jaguars think Schobert was no longer a good fit for their defense after just one season in Jacksonville?

“I wouldn’t say he’s a good fit,” Meyer said. “We felt good about the depth that we have right now at the linebacker position. That was one of those things, I just listened and learned a lot about the whole process with that. I get it. You get special-teams value, too, when you start taking [Shaquille] Quarterman and Quincy Williams and Dakota [Allen] and . . . Chappelle [Russell]. So, we have four young cats that have some real special teams value to us right now. And Damien [Wilson] we felt is really coming on.”

For now, we wait until the details surface and that might not be until Monday or Tuesday as the trade was made official on Saturday. The only thing we know for sure right now is that Schobert is scheduled to earn a base salary of $7 million in 2021 and that amount is fully guaranteed. All we need to find out is how much of that will the Steelers be paying.