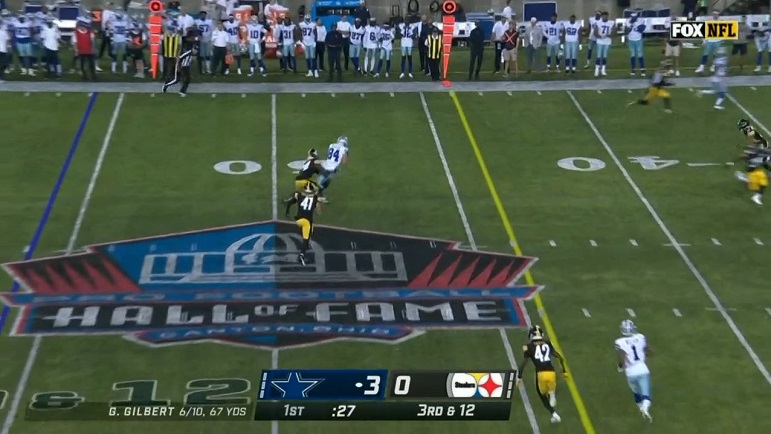 While the Pittsburgh Steelers should get inside linebacker Devin Bush back in 29021 after he missed most of the 2020 season with a knee injury, the rest of that position group now includes mostly unproven players battling for what could ultimately be as many as four other spots. Against the Dallas Cowboys Thursday night in the Steelers 2021 preseason opener, the inside linebacker group minus Bush, as a whole, didn’t play very well. On Saturday, Steelers defensive coordinator Keith Butler didn’t sound too thrilled with what he observed from the team’s inside linebackers in the Hall of Fame Game.

“We’ve got to see what’s going on there,” Butler said on Saturday. “We’ve got to find out who’s going to be our best backups. Right now, that’s still in question, I think.”

Against the Cowboys on Thursday night Bush sat out the contest and that left Ulysees Gilbert III to start alongside Robert Spillane. Marcus Allen and rookie draft pick Buddy Johnson relieved Spillane and Gilbert after 32 defensive snaps and that duo played 29 snaps before giving way to Tegray Scales and Calvin Bundage.

With Thursday nights top duo of Spillane and Gilbert both not playing very well in that preseason contest against the Cowboys, Butler was asked on Saturday if there now might be a plan for rotation at inside linebacker in the remaining preseason games to maybe get Johnson and Allen some snaps earlier.

“I rotate nobody if I don’t think they can play,” Butler said.

Butler was also asked on Saturday to particularly talk about the play of Gilbert so far.

“Uly’s been okay, but he’s got some competition too,” Butler said.

With the Steelers inside linebacker depth chart not looking overly great right now as the team prepares to play their second preseason game on Thursday night against the Philadelphia Eagles, Butler was asked if it’s possibly the team looks outside their current roster for help at that particular position.

The Steelers have added a few veteran free agent players over the course of the last few weeks so perhaps they might consider adding another one in the form of an inside linebacker in the next 35 days. For now, however, it certainly seems like the Steelers will give their inside linebackers currently under contract another close look on Thursday night against the Eagles.