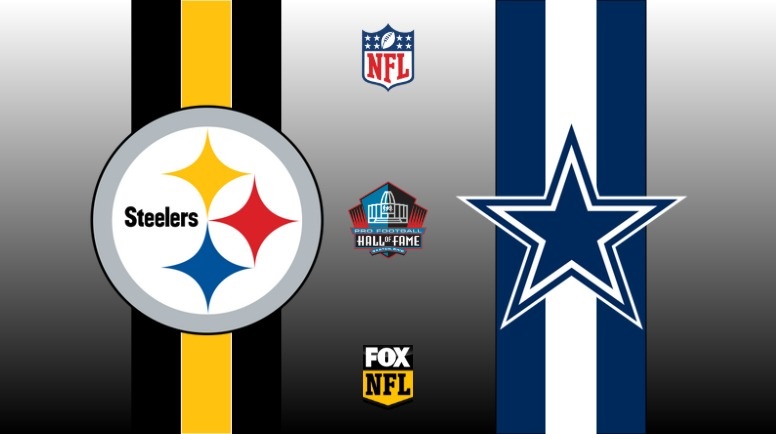 It’s finally time to talk about what we saw in a 2021 Pittsburgh Steelers preseason game! Today I wanted to provide some takeaways and data from the game. We of course want to keep in mind that this was just one game, but will help us to see the trajectory of the players as the preseason plays out. With that in mind here is a graph of the Steelers players snaps and offensive grades from Pro Football Focus (PFF): 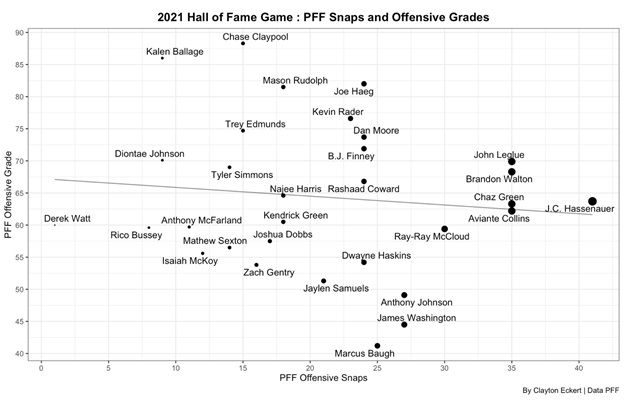 Let’s start with the offensive line, everyone that played got plenty of playing time and we also got to see five projected backups lead the way in snaps. This is definitely a good start in finding out what these men can do for us as we continue to watch this unfold throughout the preseason. The highest rated offensive lineman included: Joe Haeg, Dan Moore, and B.J. Finney with PFF grades above 70. Kendrick Green was the player I mentioned in my last article that I would have my eyes on, and my first takeaway was his effort. Many times last season there was an issue finishing blocks in the run game (whether effort or technique), so I really enjoyed seeing Green and others bring the attitude and largely playing to the whistle like I was hoping for. Another takeaway for Kendrick is I enjoyed seeing him work in space. This is something many new about if they evaluated him in the draft, but great to see it in game action. Lastly, I enjoyed the run successes early in the game, something that the offense will need to do to win games (unlike late in the season and playoffs last year).

Perfect time to transition to the running backs, starting of course with Najee Harris. I know the total yards don’t look impressive, but as I mentioned with the offensive line, I was looking for successful runs and three of his first four rushes were successful. That was encouraging and seeing him confirm his ability to get additional yards in both the run and pass game was great to see. After hearing positive reviews about Kalen Ballage through camp, it was great to see his performance and the TD run straight ahead (props to Kevin Rader and the interior blocking), especially considering two plays before he had the indecisive run where he couldn’t get around the corner when the middle was stuffed.

The tight ends didn’t jump out to me watching the game very often other than the previously mentioned Rader block. One cool takeaway early in the game though was my favorite pre-snap action of the game. Zach Gentry at left tight end, and Ray-Ray McCloud in the left slot. They both motion to the right with Gentry motioning back to his original spot, then McCloud motions back to the left late on the jet sweep handoff. The play only goes for two yards, but this was my favorite example of the Canada’s influence we’ve been talking about this offseason. We also got to see quite a bit of play-action, hopefully we get to see that element more as we get into the regular season to add as many elements as possible to our offense that can help with our predictability issue at the end of last season.

As for the quarterbacks, I really felt Mason Rudolph won the night. He seemed less rattled and I had him down for some good reads of coverage in my notes. There was the botched jet sweep exchange to Claypool early, but good start for him overall. Joshua Dobbs had good moments, I have always enjoyed him as a player and thought while inconsistent made good throws. So many people were discussing Dwayne Haskins before the game, and he had ups and downs but nothing too concerning just room to build on. The most encouraging thing for the group is there weren’t many bad decisions overall, a main thing they need to prove over the preseason to claim or lose their roster spot.

Finally, let’s look at the wide receivers. Chase Claypool showed some good things and was the highest rated player by PFF in the game. Many people are on him about the drop he should have caught, but there were many other positives. Route running seemed sharper and improved in the game, hopefully that is a sign of things to come as he gets more experience. Wanted to mention that the pre-snap motion plays on the first two drives (five plays), the motion men were Claypool and McCloud. Will be interesting to see if this will be varied more throughout the preseason and into the regular season. Tyler Simmons had the only receiving touchdown on his one catch for five yards on a good out route on #41 for Dallas.

Overall very encouraged for the offense in the game. Now let’s do a similar view and outlook for the defense: 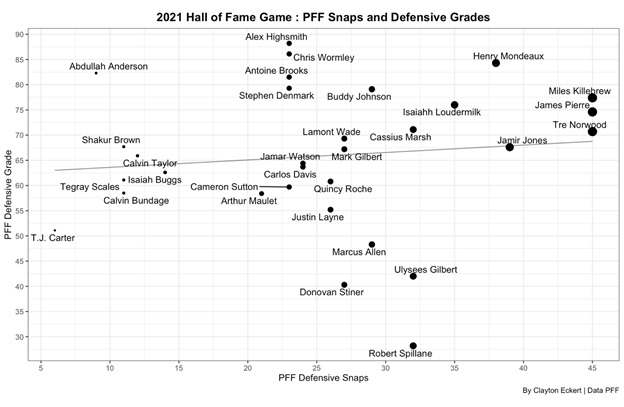 Let’s start with the position I wanted to learn the most about, the defensive backs. Really enjoyed several performances, but as the graph highlights, Killebrew, Pierre, and Norwood lead the team in defensive snaps and Killebrew highlighting the group with the strongest performance. That was great to see since he is new to the team, someone I will be keeping an eye on through the preseason. That is true for much of the secondary in this game, and Antoine Brooks really looks like the slot corner guy to me. It is one performance, but the standout on the first watch of the tape was the difference in size between him and when Arthur Maulet came in (Maulet=190lbs Brooks=225lbs from nflfastR). Arthur did get beat bad in coverage early second quarter but wrote he had a nice tackle in coverage the next play and good coverage later in the drive before Dallas missed the field goal before halftime. Stephen Denmark and Mark Gilbert are players that I don’t want to get too high on yet but saw good things from them. Gilbert showed up on the first watch of the game, with two good coverage plays and Denmark with a nice pass breakup.

The starting defensive line looked great, especially Highsmith with the top PFF grade. Run defense, pass rush moves, and chasing plays down was a treat to see and he displayed the progressions we’ve heard about this offseason. Mondeaux and Wormley made my notes for providing strong push/movement (even though my focus wasn’t on them first watch) and PFF graded these the top three defensive players in the game.  Jamir Jones lead the team with four pressures, followed by three from Highsmith, Carlos Davis, Abdullah Anderson, and Quincy Roche, who had a nice move/sack around the edge that was great to see, but want to watch him more on a down to down basis moving forward. Five sacks total and a team high of two from Marsh.

Now for the off-ball linebackers, Buddy Johnson fared well according to PFF especially compared to Ulysees Gilbert and Robert Spillane. It didn’t end up in my notes, but Johnson was graded highly in coverage per PFF. This is something I will be focusing on more when re-watching this game and moving forward. And unfortunately, Spillane coverage of running backs split out wide sightings! I know it’s “only preseason” but maybe get one of the other defensive backs in on those situations? I know I’m not alone in that opinion, something that had an obvious effect on being the lowest graded defender.

Special teams graphs will come later in the preseason because many players have the exact same PFF snaps and grades with this small of a sample size, causing a messy graph. I will provide snap counts for this week in this table (bolded players = PFF grade of 85 or higher):

Tre Norwood, Anthony Johnson, and Mark Gilbert top the table in grades, and all had ten or more snaps. Great overall performance from the special teams in general (with exception to Sam Sloman) and Harvin’s punting performance made me think “you wanted to see consistency, wish granted!”

I really hope you enjoyed the first Steelers game of 2021 as much as I did! Final question: Do you think the PFF grade leaders (Claypool and Highsmith) can keep this up through their second year?  Thanks for reading and let me know your thoughts in the comments!