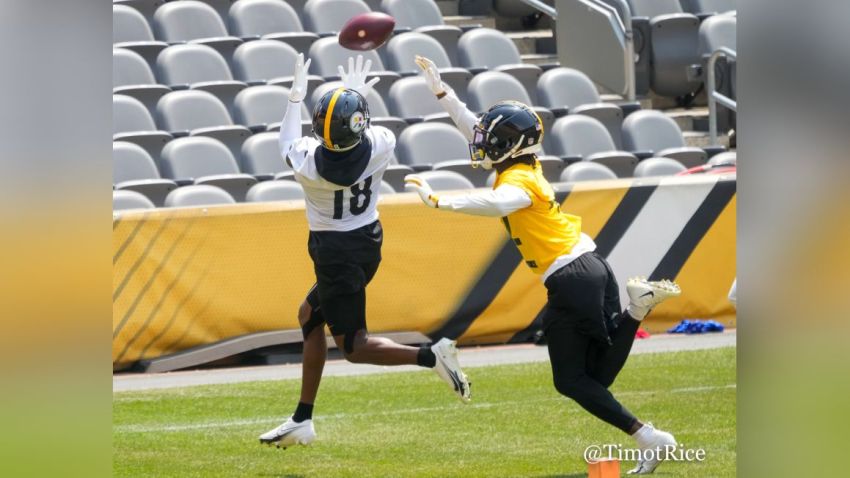 All throughout Wednesday morning and afternoon, the remnants of Tropical Storm Fred made their way across the state of Pennsylvania. For the Pittsburgh Steelers, that meant inclement weather to wrap up the final day of training camp, a rainy addition to the end of several productive weeks.

Seeing the circumstances awaiting them for Wednesday’s on-field work, the Steelers took advantage of the weather to practice ball security, something that plays into a focus of the team to improve this offseason — dropped passes — after a year plagued by them last fall.

“We embraced the inclement weather. Our game is played in a variety of weather circumstances, so the rain and the wet ground and so forth gave us an opportunity to really focus on some fundamentals in terms of ball security and really the opportunities at times that the weather provides in terms of ball searching,” Steelers head coach Mike Tomlin said following practice. “Just thought we had good work. We’ll take it however it comes to us. I just thought the inclement weather was a big bonus for us today from a developmental standpoint.”

Fumbles from both backs and receivers have been an issue for the Steelers in the past. But it was drops that were the main ball security weakness for the team last season. Diontae Johnson led the NFL in drops (with between 10-16, depending on the database used), but was not the only Steeler among the league’s leaders. Eric Ebron found himself in the top 20, and not far off from him was Chase Claypool.

Through plenty of practice and some creative means, the Steelers have worked to eliminate drops as much as they can from the offense. Getting to end training camp in the rain offered another way to improve in that field, as well as prepare other players in matters of ball security, such as running backs holding on to the ball through tackles and quarterbacks in delivering passes in the rain.

So how did the Steelers perform in that area of focus?

“The ball security was rather solid, I thought. I saw some people not trusting their hands in the passing game, body catching and going down to make catches when they can stay on their feet. So it did provide some opportunities to teach, but largely, the ball security itself was above the line,” Tomlin said.