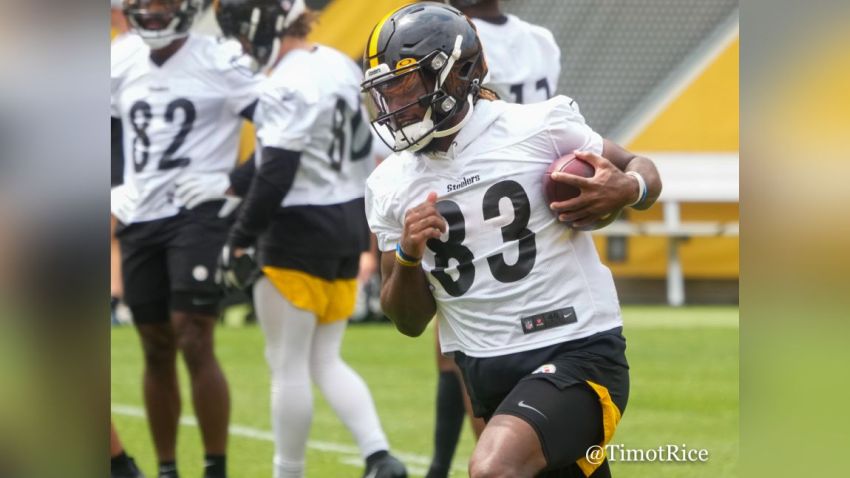 While the top of the WR depth chart is all but locked into place with JuJu Smith-Schuster, Diontae Johnson, Chase Claypool, and James Washington all guaranteed to make the roster, it leaves hardly any wiggle room for all the other UDFAs and futures contact guys to have a chance to win a spot on the roster. Ray-Ray McCloud is likely also a good bet to make the roster given his contributions as the team’s kick and punt returner from last season, thus making it difficult to picture the Steelers keeping six receivers on the depth chart once regular season play gets going.

However, after watching the first two preseason games, I wanted to present the case for WR Anthony Johnson to be included with this group as sixth WR to make the 53-man roster at the conclusion of the preseason. As Alex Kozora has highlighted in his recent training camp stats post, Johnson has been tearing up thus far in practice and has hauled in 21 of 24 targets (87.5%) for 239 yards and three TDs in the ten public training camp practices Alex has been able to attend. To put this into perspective, Johnson currently leads all WRs in receiving yardage during these practices and is tied for third in TDs while averaging 11.4 yards per reception.

These aren’t gaudy numbers but show the consistency that Johnson has maintained through the “dog days” of training camp. What is more impressive when looking through Alex’s stats is that Johnson has recorded seven receptions of 15+ yards to lead all pass catchers but hasn’t logged a single drop in that same timeframe.

While not making a big impact in the Hall of Fame Game against the Cowboys as a receiver, Anthony Johnson got some exposure in that area against the Eagles. Everyone who watched the game likely remembers the wide-open TD catch in the back of the end zone where the defense jumped offsides, giving #3 Dwayne Haskins the opportunity to look for the big play down the field and successfully found Johnson on the vertical pattern from the slot all by his lonesome.

Here is an aerial view of the same play, highlighting just how open Johnson was.

While my grandmother would have had a great chance to make that some grab for the score with that much space, this next grab from Johnson took a lot of skill. With Josh Dobbs at QB, Johnson starts out in the slot on the left side of the formation and runs a comeback route toward the sideline. Dobbs releases the football but puts it low and out in front of Johnson as he breaks out of his route. Johnson lays out for the pass, corralling with outstretched hands into his chest before he hits the ground to complete the process of the catch and successfully move the chains on the slightly off-target pass attempt.

Johnson displayed this ability to make difficult catches outside of his frame as well as win combative catch situations during his time in college at Buffalo, regularly feasting on MAC defensive backs. Johnson stands at 6’2, 220lb and carries his weight well, having good play strength and reliable hands as evidenced by his tape and the stats from training camp to back it up. His size and physicality also aid in his ability to be a positive contributor on a variety of special teams’ units for Pittsburgh as he has showcased over the past two games.

Recently in a post-practice interview, Anthony Johnson made the remark that he understands the path to a spot on this roster for him is through special teams. Given that he at-best can expect to be WR 5 or 6 on the team depth chart, special teams will likely be the thing that not only could earn him a roster spot, but also give him a helmet on Sundays.

We see that size and physicality come into play from Johnson on punt coverage as the wide man overtop of the gunner. Here are two examples that Alex Kozora pointed out in Johnson’s first preseason game against the Cowboys where he shows great willingness as a blocker on the outside and the aggressiveness to take his man to the sideline and allow the returner to have a clear running lane.

The second play also indicates the kind of blocker Johnson can be from the WR spot as well which can be invaluable when running jet sweeps, WR screens, and other gadget-like plays in OC Matt Canada’s offensive system. Johnson has also made quite the impact as a gunner on punt coverage the first few games for the Steelers.

He plays with good urgency to rush down the field on the returner and has the size and strength to fend off blocks as he maintains pursuit. Check out this effort by Johnson on the highlight punt by #6 Pressley Harvin III who pins the ball right up on the goal line. Johnson rushes down and secures the ball from falling into the end zone to pin the Cowboys against their own goal line to start their next offensive drive.

Another great play on punt coverage from the same game occurred when Harvin III had his punt bounce off of the returner from Dallas. Johnson, who was the first man down the field on the rep, immediately saw the opportunity and rushed to recover the ball near the red zone inside Dallas territory for the game-changing special teams play.

If special teams’ coordinator Danny Smith has any say on the matter, I would reckon he will be banging the table for Anthony Johnson to make the roster when final cutdowns come should he keep up this stellar play on special teams. He would have a direct path to playing time if kept, likely being an ideal replacement for Chase Claypool on kick and punt coverage units and can be a guy that earns a hat on game days. Johnson also isn’t a slouch of a WR either, as he has demonstrated he can be reliable both in the slot and on the boundary, having reliable hands and can make a play if given the opportunity.

Should someone go down with injury during the season or say hypothetically James Washington is actually dealt to a WR-needy team before the preseason comes to an end, Johnson can feasibly be that WR4-5 that has a similar body type to Washington and could pleasantly surprise should he be given that role given his athleticism and production profile coming out of college.

Johnson may be 26-years-old and isn’t the youth movement some of the other names that were brought in as UDFAs would be, but he may be the most well-rounded player of all the options in that WR room on the outside looking in, and can wear multiple hats on both offense and special teams that can warrant him getting the nod to make the Steelers roster for the 2021 season.

What are your thoughts on Anthony Johnson? Do you think his contributions and consistency in training camp practices warrant a spot on the 53-man roster, or do you think that there are too many bodies already in the room to make that justifiable? Please leave your thoughts in the comments section below and thanks again for reading!