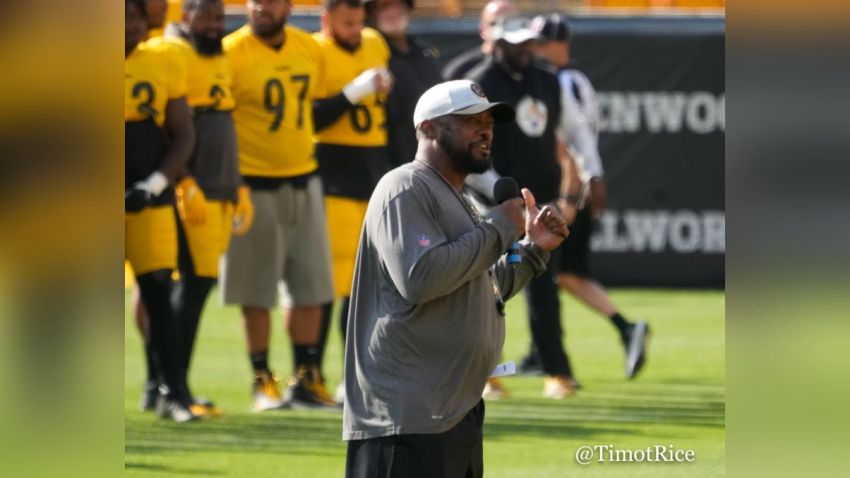 The Pittsburgh Steelers were back in practice Monday afternoon, after some time off following the preseason finale Friday night against the Carolina Panthers. For a lot of the players out there working, it will be their final practice with the team. Every NFL team has to get down to a 53-man roster by 4 p.m. tomorrow. The Steelers as of this writing sit at 70 players, meaning that 17 more will find out within 24 hours that they missed a roster spot.

It’s one of the toughest days of the year for a lot of players, and those around the league for a long time are sensitive to that. For Mike Tomlin, in his 15th season coaching the Steelers, it’s something he has a lot of experience with, and knows the difficulty of for the players after getting through all of camp and the preseason.

“It’s always difficult. It’s difficult whether you have games, it’s difficult if you don’t have games, because you just got a level of respect for what these guys put into this process,” Tomlin said, referencing last year when COVID-19 prevented preseason games from happening. “It’s a culmination of a lot of work, not only dating back to the spring, but just really all of their football lives. And so we’re highly sensitive to that, we’re respectful of that. Business has to get done, but it gets done with that sensitivity and that understanding.”

The Steelers are already well into making their final cuts. Our updating tracker will keep a running list of those who the team does not keep on their 53-man roster, and it always includes names that have made their impact felt over the past two months.

Among those released thus far are players like Mathew Sexton, a receiver who had a pair of electric punt returns during the preseason but who fumbled in the finale Friday. There is also one of the team’s highest-profile UDFA signings ever, in Michigan State corner Shakur Brown. And then there is Lamont Wade, a safety from Penn State who starred as a Pittsburgh-area high schooler for the PIAA champion Clairton Bears.

Those releases aren’t the end for all those players. Every NFL team can add players via waivers on Wednesday, and then teams will fill their practice squads from among those released. It doesn’t make it any easier for players who miss making the active roster, but it does keep their hopes of doing so in the future alive, with success stories like receiver Nate Washington proof that practice squad players can end up having successful NFL careers.