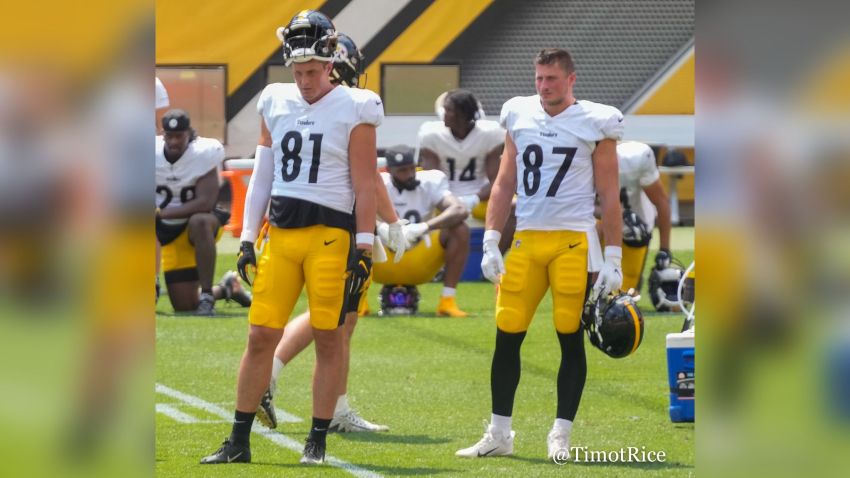 Up for Grabs: Number Three Job

The tight end position is extremely clarified at the top of the depth chart. The two guys who are going to be used heading into the season are veteran Eric Ebron and rookie second-round pick Pat Freiermuth, who is already impressing with his catch radius, and is making progress as a blocker.

This year, the Steelers are hoping to actually have a viable number three tight end, and it may well be the guy that they have had for the past two years in Zach Gentry. First drafted in the fifth round in 2019 out of Michigan, Pittsburgh knew that he would need time to develop. He’s showing so far this training camp that he has.

For a guy who originally went to school to play quarterback, Gentry is finally starting to really look like a tight end. He’s making some impressive plays as a receiver, and showing off what his 6’8” frame can deliver in terms of a catch radius, but most notable is the fact that he actually looks like he might be able to block now.

That doesn’t mean that he’s going in uncontested, though. Kevin Rader has been with the team for a while now, and was called up toward the end of last season when Gentry got hurt. He has the ability to contribute on special teams, which gives him a definite advantage, and is already a blocker, but is showing the ability to catch the ball now as well.

Marcus Baugh was just added as a free agent signing to replace Dax Raymond, who suffered an injury in training camp (for the second year in a row) and was waived injured. Originally undrafted out of Ohio State in 2018, he has spent most of his career on practice squads.

He did play for the Washington Football Team last season, playing 79 snaps on offense, which is more experience than either of the other two competitors have. He caught one pass on one target for two yards, so not a lot to say there, but he has the size and frame to be a blocker.