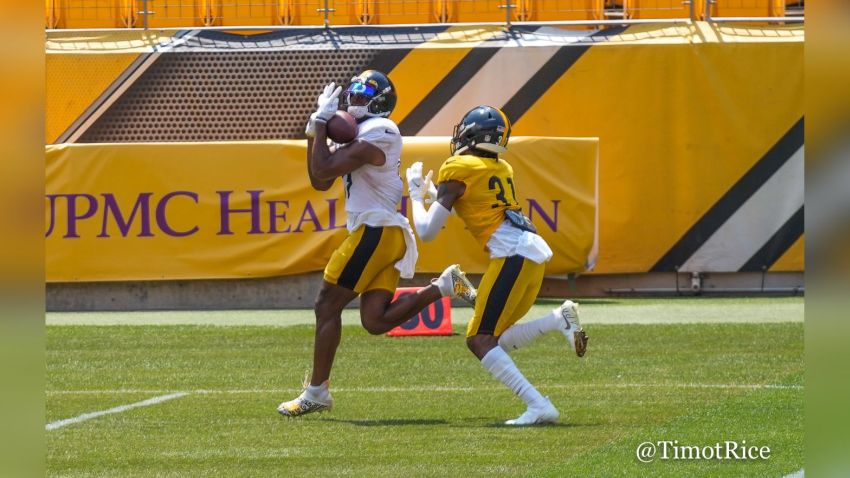 Finishing up the skill positions with the wide receivers.

JuJu Smith-Schuster: A solid, though not overly spectacular camp for Smith-Schuster. It doesn’t look like he’ll get his wish of playing on the outside much more this season. Perhaps a little bit but based off how he aligned in camp, he’ll continue to work mostly out of the slot. His start to camp was relatively quiet, failing to find the end zone in seven shots in his first four practices. But his numbers spiked from there, five touchdowns over his next six, though he would’ve had a seventh had he not dropped a would-be 60 yard TD from Mason Rudolph.

He did redeem himself late in camp with one of the best catches in team session, a diving 55 yard grab down the middle of the field from Ben Roethlisberger. He finished the 13 public practices as the team’s leading receiver, his 323 yards one more than Anthony Johnson’s.

Smith-Schuster finished his camp with 29 receptions (second on the team only behind Diontae Johnson’s 30) and those five scores. His 78.4% catch rate is an excellent number and best we’ve recorded from him. In the two games he played, he continued to make tough catches over the middle and sacrifice his body as a blocker. He’s very much a star of this new social media age but as a player, a total throwback type.

Anthony Johnson: Johnson might not do one thing particularly well but he does a little bit of everything. A big-body receiver, he can align as a big slot of play either outside receiver spot. He does it all on special teams as a gunner or jammer, performing well in both respects. As a receiver, he put up big numbers, making a couple of impressive plays downfield finishing third on the team in catches (25) and second in yards (322). No player had more catches of 15+ yards than his nine.

His ability to wear any hat gives him strong practice squad value though his upside as a receiver is limited. The talent isn’t so urgent or immense that he needs to be kept on the roster. Football’s equivalent of a AAAA player. He should easily land on the practice squad. And that’s what I expect to happen.

Diontae Johnson: He had a lot of volume, a team-high 30 receptions and to his credit, didn’t miss a single practice. He was also among this camp’s hardest workers, one of the first players on the field catching passes before practice and staying after to catch some more. In team sessions, we have him down for just two drops on a team-high 42 targets, a 4.8% rate. Sample sizes are obviously small but that’s better than JuJu Smith-Schuster (5.4%), Chase Claypool (12.4%) and James Washington (7.7%).

Johnson didn’t have many big plays in camp, averaging only 7.9 yards per catch and only three of his 30 receptions went for 15+ yards. But he was also consistent and never had a bad day of practice. In-game, he showed his downfield chops with two catches of 30+ yards already, including a 43-yarder in Saturday’s win over Detroit. His route running continues to grow and is among the best in the league, though not at the tippy top. Yet.

Mathew Sexton: A fun slot-looking receiver, Sexton can align on the inside or outside. Explosive with serious straight-line speed, it didn’t translate to big plays in camp, he averaged just 7.9 yards per catch, but he’s shown a penchant for big plays in the return game. Two long punt returns over the team’s first three preseason games.

His slot body type gives him different appeal than guys like Anthony Johnson or Cody White. And Sexton’s return value should land him on the practice squad as a backup/injury option behind McCloud.

Chase Claypool: Up-and-down camp for Claypool, who thankfully avoided any sort of serious injury after a scary-looking ankle injury late in the process. Claypool had a quiet start, losing some jump ball battles to Cam Sutton but came on strong, making several great leaping catches in the corner of the end zone. For camp, he scored three times and averaged 7.1 yards per catch. That number would’ve been a lot higher had he hauled in a 55-yard on-the-money throw from Ben Roethlisberger one practice. It fell through his hands and he dropped two more in camp, tying him for the team lead with Najee Harris and Jaylen Samuels.

He also had a 40 yard jet play in camp and if there’s a Steelers’ starter who could be used all over the field in Canada’s offense, it’s him.

Claypool needs to find some consistency in his game but the talent is obviously immense and he should be the team’s best downfield threat this season.

James Washington: A quiet camp for Washington, headlined by his reported trade request. That notion was refuted but given Washington’s evasive answer when asked, it’s clear he went to the team about his role and his future. It’s hard to blame him.

In 2019’s camp, Washington caught 24 passes on 46 targets for 234 yards. In 2021, granted he missed a couple of practices, he caught eight passes on 13 targets for 65 yards. A clear #4 receiver with Claypool in the fold, Washington often ran with the second-team, though he played in 11 personnel against Detroit with Claypool sitting out.

His actual performance was fine, a couple red zone fades he snagged over the defender. He may still want out but the Steelers would be wiser to keep him as a Plan B for inevitable injury. It’d take at least a 5th round pick for me to consider moving on, even knowing he’s almost certain to walk this offseason.

Ray-Ray McCloud: Similar to Ryan Switzer a couple camps ago, McCloud made more plays downfield than what he’s been asked in-game. McCloud averaged 10.8 yards per catch on 14 grabs, running a more complete route tree. He played in the slot and occasionally saw more reps on days where Smith-Schuster wasn’t a full-go. Three of his grabs went for 15+ yards. He also didn’t drop a pass on any of his targets.

Despite Mathew Sexton’s strong showing, he should still be the team’s kick and punt returner considering what he did last year to bring these units out of the basement, especially the kick return game.

Rico Bussey Jr.: For a brief time, he was the talk of camp. But if there’s a such thing as an overrated camp darling, it was Bussey. He had one impressive practice early in camp, one that came in shells and not even full pads. Beyond that, he didn’t make a ton of plays. To his credit, he might be the best actual wide receiver in terms of talent and skillset with a nice blend of size, speed, and hands.

He could make the practice squad for the talent he has. But it’s a crowded room and Bussey offers little on special teams. Saturday, he played just one snap there Saturday compared to Cody White’s five and Anthony Johnson’s seven.

Cody White: White was able to hang onto the Steelers’ roster for more than the first week of camp, sitting out due to a hamstring injury. He didn’t practice until well into August but made up for lost time, catching seven passes for 76 yards over the final couple of days. That doesn’t include plays like a nice toe-tapping grab along the sideline in 7v7.

White is a big body who, like Anthony Johnson, can play in the slot, though I don’t think he offers the special teams value Johnson does. He has some value there but not as much. I’m not sure I see hyper versatility or a standout quality that keeps him around but the fact the team held onto him in the early going should count for something positive in his corner. Borderline PS guy but if they keep Johnson, I don’t see the reason to hang onto White too.

Isaiah McKoy: Billed as a vertical threat from Kent State, McKoy had one such moment in camp, a 40+ yard deep down the right sideline in a two-minute drill. But that was about his lone highlight. Though he had three other catches go for 15+ yards, his average was closer to ten, spending lots of time fighting for reps and making underneath snags.

Pittsburgh got him involved in the return game but he was an awkward fit, a long strider but not a fluid, agile guy who may have lost his roster spot with a horizontal punt return that lost seven against the Eagles. He was part of the first cutdown from 90 to 85.

Tyler Simmons: A wide receiver who looks like a running back, Simmons got a little bit of a burn as a gadget/motion man in Matt Canada’s offense, especially early on. Throughout camp, he registered three carries though they went for just two yards.

Simmons’ biggest problem are his hands, dropping too many easy passes or muffing punts in the return line. Just in team drills, he had three drops on 21 targets, a 14.3% rate. He doesn’t show anything special as a route runner and though he has some athleticism, it’s not enough to secure a roster spot. He does a tiny bit of everything but nothing very well and he could be part of the five cuts tomorrow as the roster trims from 85 to 80.