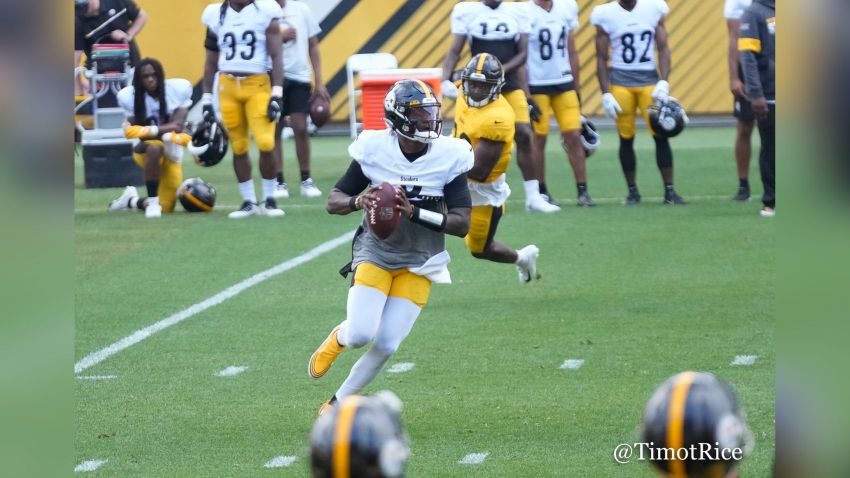 We’ll start things off with a review of the team’s quarterbacks.

Ben Roethlisberger: To be honest, it’s not like I’m looking to scrutinize Roethlisberger’s camp play too much. Even in his age-39 season and first training camp I’ve personally watched since his elbow injury and surgery. We’ll have full camp numbers on Friday so I don’t have updated totals from the final three practices yet, but Roethlisberger’s numbers were good, about in-line with where they were in 2019. Completion percentage improved a little bit though his INTs also shot up. Couple of picks the last few days of camp but nothing I’m worried about as it pertains to the season. You can bet Roethlisberger intentionally throws some 50/50 balls just to see if his guy can make a play.

The big question people have is Roethlisberger’s arm. It looked strong and live, highlighted by a 55-yard completion to JuJu Smith-Schuster this past week. The ball traveled about 50 yards of that distance. He also had a money throw dropped by Chase Claypool earlier in camp. But Roethlisberger’s arm and how it looks now versus what it’ll look like by mid-late season are two different things. His body, arms (and knees, the most overlooked part of his injury history) are much fresher now than they will be.

Overall, Roethlisberger had a solid camp. The same as all the others. Maybe slightly worse with some of the interceptions. But nothing that has me concerned about him in 2021. Perhaps the last training camp we’ll ever see #7 participate in. Hard to wrap your head around.

Josh Dobbs: A nice camp for Dobbs. The Steelers just rarely gave him an opportunity to show more. Unless Roethlisberger had a full day off, Dobbs rarely worked. His reps will be less than half of what Rudolph or Haskins received and about a-third fewer than Roethlisberger’s total.

It’s difficult to blame them. Four QBs who all need work. Roethlisberger to get ready for the season, Rudolph and Haskins as they’re evaluate for the present and future.

Dobbs had a rocky start to training camp. Knowing he needed to take advantage of the few reps he was given, he threw the ball into windows that barely existed and ones that were shut. It didn’t always result in INTs but some were close and required being bailed out by the receiver — TE Kevin Rader stole one away from three guys at the end of seven shots one day.

Past that though, Dobbs improved. I’ve been critical of his horrendous completion percentages in past training camps. Again, still need to calculate the final three days and because of Dobbs’ low attempts, they could change a bit. But a massive improvement overall. Here’s his year-by-year percentage.

He’s shown more accuracy to the middle of the field on crossing patterns, hitting receivers in stride and allowing them to do damage after the catch.

His mobility is also a plus in Canada’s system and he’s the most fleet of foot QB in Steelers’ camp. Some interceptions were ugly, one against the Eagles, another off what had to have been miscommunication yesterday, but it was a good camp for Dobbs. But the lack of opportunity says he never really had a chance to make the team. Maybe the team can squeeze a seventh-round pick out of him.

Dwayne Haskins: Haskins earned a ton of buzz all camp as the shiny new QB. Could he be the #2? Could he be the QB of the future? All questions not really worth asking at this moment, especially the latter. Haskins got off to a hot start, ripping the ball with big play after big play downfield. The numbers told that story So did the eyes. He has the best arm in camp. The zip, the velocity, ability to make tight-window throws, he can do it. No one came close to his number of 20+ yard completions. Through ten practices, he had more than double second place (14 to Roethlisberger’s six).

Haskins faded a bit mid-way through camp with a so-so performance against the Dallas Cowboys (a little too conservative and quick to hit secondary option/checkdown), though he’s done well to avoid any sort of egregious mistakes and issues. And though his decision-making hasn’t been perfect, he’s improved against zone coverage, not getting tunnel vision and missing underneath defenders waiting to pick him off. Overall, his ball placement has been above average. He also showed a little more mobility than I recalled. He’s not Lamar Jackson, but it’s functional to run half-boots and rollouts in Matt Canada’s offense.

Quite simply, he also put points on the board. Successful two-minute drives during practice and the offense hit paydirt when he was under center in games. Name of the game for a QB. Get into the end zone. Haskins did.

He could become the #2 but it’ll require him playing at a high level, similarly as he did against the Eagles, to really push Rudolph.

Mason Rudolph: Bit of a slow start for Rudolph who was definitely outplayed by Dwayne Haskins through the first week of camp. To his credit, he is getting the ball out quicker and though pocket presence is hard to judge especially in camp, I think he’s made at least small strides there too. That’s been the biggest issue I’ve had with his game.

But he didn’t press the football downfield enough and was too risk-adverse for what a QB needs to be. A high completion percentage reflected that (68.1% through ten practices was second highest of the QBs, 7.4 YPC was the lowest).

Those numbers, and this is why camp stats are important, are similar to 2019. Not much growth evident here.

Rudolph improved and played well in games, outplaying Haskins in the opener against Dallas, though Haskins was better in the second game against Philadelphia. Rudolph struggled to lead the offense to scoring drives. In fairness, some of it was out of his control.

Overall, unless Haskins has two great games the rest of the preseason, Rudolph is likely to remain as the #2. His spot as Ben’s backup isn’t written in pen. But it’s close.

He is who he is. Better or worse, Pittsburgh likes him.