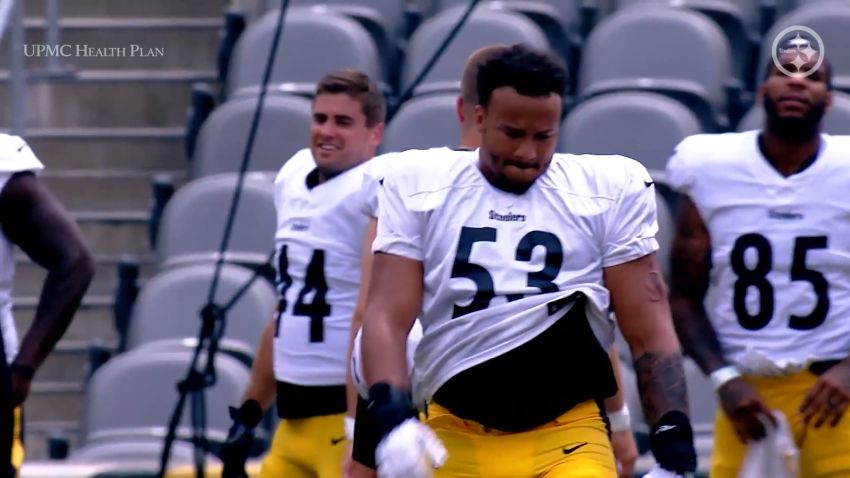 The Pittsburgh Steelers lost a bigtime contributor this offseason, among many, when 11-year veteran starting center Maurkice Pouncey announced that he would be retiring. As a nine-time Pro Bowler, he certainly has a shot at making the Hall of Fame someday, but the Steelers’ focus right now is just figuring out who will be snapping this year.

It certainly appears that the leading candidate is rookie third-round pick Kendrick Green, who was announced as the starter for the upcoming Hall of Fame game pretty much as soon as training camp started. Shortly after practice today, veteran nose tackle Tyson Alualu talked to Missi Matthews about his battles with the rookie and what he’s seeing.

“It’s been good. We’ve definitely been battling, and I feel like we’re out there just getting each other better”, he said. “I’ve seen a lot from him, as far as him using his athleticism and speed to get around, get on the edges, and even climbing to the next level. I think we’re in good hands with him at center, and I know he’s just gonna keep getting better”.

Tyson Alualu was one of the last #Steelers players off the field tonight and was still kind enough to join us on @SteelersLive. #SteelersCamp pic.twitter.com/AfUnfuUV6H

Primarily a guard during his time at Illinois in college, Green actually comes from a defensive background, which perhaps provides some of the edge to his aggressive style of play. That and his athleticism are the qualities that the Steelers were attracted to, and it was perhaps him that led them to say before the draft that they thought the center position was abnormally deep this year.

Pouncey’s retirement admittedly did not leave the team with much on-hand at center. At the time, it was only J.C. Hassenauer returning, a second-year former college free agent, who started four games due to injury last season, including three at center. He started the 2020 season as the ninth linemen, but that changed right away as Stefen Wisniewski was injured in the opener.

While he returns, and is listed as the starting center on the first official depth chart, that means little at this time of year. He is also currently sidelined with a knee injury, though appears to be making progress. Also on the roster is B.J. Finney, who spent his first four seasons here before leaving in free agency.

According to Alex Kozora, the Steelers were working John Leglue some at center during practice today. Leglue, listed as tackle who can also play guard, spent time on the practice squad last season. Head coach Mike Tomlin has also said that Anthony Coyle has worked at center.