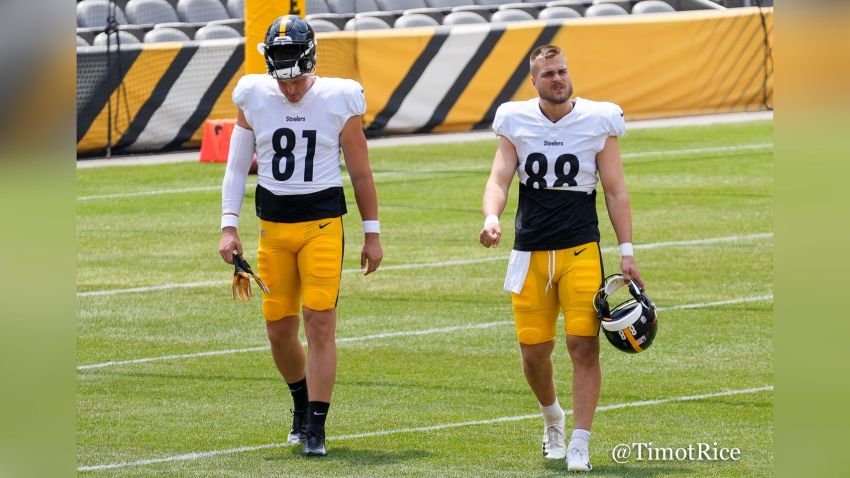 Among the Steelers over the first four days of training camp, tight end Zach Gentry has been one of the biggest standouts, showing considerable improvement as he enters his third season fighting for a roster spot after playing only six games so far in his career. And with Eric Ebron sidelined for part of camp, second-round pick Pat Freiermuth has gotten a preview of the future No. 1 tight end spot he is expected to inherit in the coming seasons.

On Saturday, Freiermuth was in the spotlight as head coach Mike Tomlin specifically gave him a tough matchup in the backs-on-backers drill: Alex Highsmith, another player who has been among Pittsburgh’s standouts in the opening half-week of camp. Speaking with the media following camp, Tomlin explained why he set the two future starters against each other.

“You know, 56 [Highsmith] is a guy that has big-time urgency in his play. His motor runs hot, and we’re just trying to develop that, and Pat. You partner those guys together to create that. That’s the iron-on-iron principle,” Tomlin said. “There’s a rhyme and reason to a lot of the match-ups, and usually it’s about one man’s strength versus another element of the next man’s game that needs improvement. In the case of those two, we just like the finish of Alex, and so we’re going to pit Pat in those circumstances.”

Continuing a strong start to camp as he hopes to earn the starting job over Melvin Ingram along the edge, Highsmith was the clear winner in Saturday’s reps, according to Steelers Depot camp expert Alex Kozora. But Kozora did note that Freiermuth showed improvement by the end. Not expected to be the top tight end this season, Freiermuth will still be featured as a blocker against players like Highsmith this season as the team’s clear second option at the position, and future starter. That work in camp is crucial as the franchise tries to rebuild its run game, and Freiermuth’s blocking ability is a central reason the team selected him over an offensive lineman in Round 2.

Blocking is a skillset that should be in Gentry’s wheelhouse, standing at a massive 6’8″ and weighing 265 pounds as a tight end. Save for a drop that ended up as a Shakur Brown interception, Saturday continued Gentry’s positive camp, and Tomlin continued to take notice.

“The tight end position is a unique one because of the challenges they face week in and week out in the NFL. Some weeks they’re blocking outside linebackers, some weeks they’re blocking big men, 4-3 ends. That’s why’s one tight ends look like Pat and some tight ends look like Zach. Zach is a guy that has a skillset and a body to match up with 4-3 people, so he better distinguished himself in those circumstances,” Tomlin said.

Gentry is fighting to be the team’s third tight end, with Kevin Rader his primary competition. Also competing is Marcus Baugh, signed this week to replace an injured Dax Raymond.