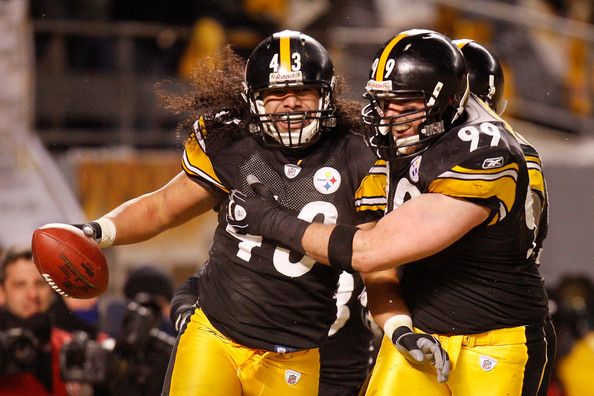 In the history of the Pittsburgh Steelers and Baltimore Ravens rivalry, few games stand out more than the 2008 AFC Championship Game at Heinz Field between the two heated AFC North rivals.

Pittsburgh rolled to a 35-24 win over the then-San Diego Chargers in the AFC Divisional Round the previous week, while the Ravens pulled out a hard-fought 13-10 win over the top-seeded Tennessee Titans in the Divisional Round, setting up an all-AFC North AFC Championship Game in frigid temperatures on the North Shore.

Historically, the two teams kept games close in matchup with the winning team often winning by 3 points or less. Early on in the January 18, 2009 AFC Championship Game, the Steelers appeared in full control from the start, racing out to a 13-0 lead in the second quarter before things got hairy until the man with all the hair came up large.

Three plays into the opening drive of the game, the Steelers struck the first blow, providing some serious heat to a game that was well below freezing at kickoff.

Dropping back to pass, quarterback Ben Roethlisberger pump-faked and fired a dart to veteran receiver Hines Ward near midfield between two Ravens defenders. Ward, who was adept at making plays after the catch throughout his career despite lacking game-breaking speed, slipped between the two defenders, racing downfield to the Ravens’ 23 yard line for the 45-yard catch-and-run, putting the Steelers in scoring position right away.

The Steelers couldn’t fully capitalize on the explosive play though as four plays after Ward’s dash, the Steelers settled for a 34-yard field goal from Jeff Reed, giving the Steelers a 3-0 lead just under four minutes into the title game.

Pittsburgh’s defense, arguably the best in NFL history, started fast against the Ravens – forcing a quick three-and-out, giving the football right back to the Steelers’ offense that was clicking early in the game.

With possession of the football once again, the Steelers couldn’t do anything with possession, going three-and-out themselves, punting the football right back to the Ravens. That’s when the game took its first drastic turn for Baltimore.

On the third play of the possession, quarterback Joe Flacco was hit and threw up a wobbler intended for veteran receiver Derrick Mason that Steelers’ cornerback Deshea Townsend undercut for the interception, giving the Steelers possession deep in Baltimore territory.

Three plays after the interception, Roethlisberger found Ward for 11 yards and then appeared to find Santonio Holmes at the 1 yard line, but a Baltimore challenge overturned the call as officials stated Holmes did not complete the catch to the ground, forcing the Steelers to eventually settle for another Reed field goal — this time from 42 yards out, giving the Steelers a 6-0 lead with 6:15 left in the first quarter.

Pittsburgh’s defense again stood tall on its next possession, forcing the Ravens into yet another three-and-out, giving Pittsburgh the football right back. The Steelers’ next possession was short-lived though as veteran running back Willie Parker fumbled the football away on the fifth play of the drive near midfield.

On Baltimore’s ensuing possession the Steelers’ defense stood tall again, shutting down the Ravens on consecutive short-yardage situations as Steelers’ future Hall of Fame safety Troy Polamalu leaped over the line and wrapped up Flacco short of the sticks on a quarterback sneak attempt on 4th and 1, ending the Ravens’ possession.

Three plays after the monumental turnover on downs, Roethlisberger connected with Holmes on an electrifying 65-yard catch-and-run for a score, giving the Steelers a seemingly insurmountable 13-0 lead with 14 minutes left in the second quarter.

That play was vintage Ben Roethlisberger as he extended the play and found Holmes wide open down the right sideline. Holmes did the rest, forcing a couple of missed tackles in the open field, racing to the left pylon for the touchdown.

Trailing 13-0, the Ravens’ offense found some life as running back Willis McGahee picked up 9 yards on the ground and Flacco found rookie running back Ray Rice for 22 yards out of the backfield. Flacco then found receiver Mark Clayton for 15 yards, but Steelers’ defensive Aaron Smith ended the Ravens’ drive — which ate up nearly 7 minutes of clock — with a sack of Flacco, forcing another punt.

On the third play of the Ravens’ possession following Leonhard’s punt return, Steelers’ cornerback Bryant McFadden was called for pass interference on the end zone on Mason, giving the Ravens the football near the goal line.

McGahee then burst into the end zone on the next play, making it 13-7 with 2:44 left in the first half of the 2008 AFC Championship Game.

The two teams then traded three-and-outs before Holmes got into the action on a punt return of his own late in the first half, taking a Sam Koch punt 25 yards back to midfield, giving the Steelers late life in the first half.

Roethlisberger lofted a perfectly-placed ball down the left sideline to Sweed, who blew behind Baltimore defenders for what should have been a walk-in touchdown. Instead, Sweed — who had major drop issues his entire career — dropped the easiest catch of his career, wiping out what would have been a 20-7 lead prior to halftime.

Coming out of the half, the Ravens and Steelers traded possessions back and forth with very little action before the Steelers put together their first lengthy drive of the second half.

Roethlisberger found fullback Carey Davis for 20 yards and tight end Heath Miller for 30 yards before the Steelers ultimately settled for another field goal from Reed, this time from 46 yards for a 16-7 lead with 3:43 left in the third quarter.

The Ravens answered early in the fourth quarter though as Clayton took an end around 16 yards to spark the Baltimore drive. Flacco then found Mason for 13 and 11 yards before then targeting Marcus Smith downfield, drawing a 20-yard pass interference penalty on Steelers’ cornerback Ike Taylor.

One play later, McGahee plunged into the end zone from 1-yard out, making it a 16-14 game with 9:32 left in the fourth quarter.

On the ensuing possession for the Steelers, Pittsburgh’s offense couldn’t do much of anything, punting the football back to the Ravens with momentum riding heavily on the Ravens’ side.

That’s when Polamalu came up large. Five plays into the Ravens’ drive, Flacco fired to the right flat looking for Mason when Polamalu undercut the throw, taking the interception 40 yards to the house, giving the Steelers a 23-14 lead with 4:39 left in the game, all but sending the Steelers to Super Bowl XLIII.

Jim Nantz had a great call on the play, stating that “it’s number 43 sending the Steelers to Super Bowl 43!”

Three plays after Polamalu’s pick-6, the vaunted Steelers’ defense forced another turnover as safety Ryan Clark rocked McGahee in the open field that left both players injured while Steelers’ linebacker Lawrence Timmons jumped on the fumble, essentially ending the game.

LaMarr Woodley sacked Flacco twice in the win, while Smith added a sack of his own. Linebacker James Farrior led the Steelers with nine tackles, setting up a showdown with the Arizona Cardinals in Tampa Bay in Super Bowl XLIII.