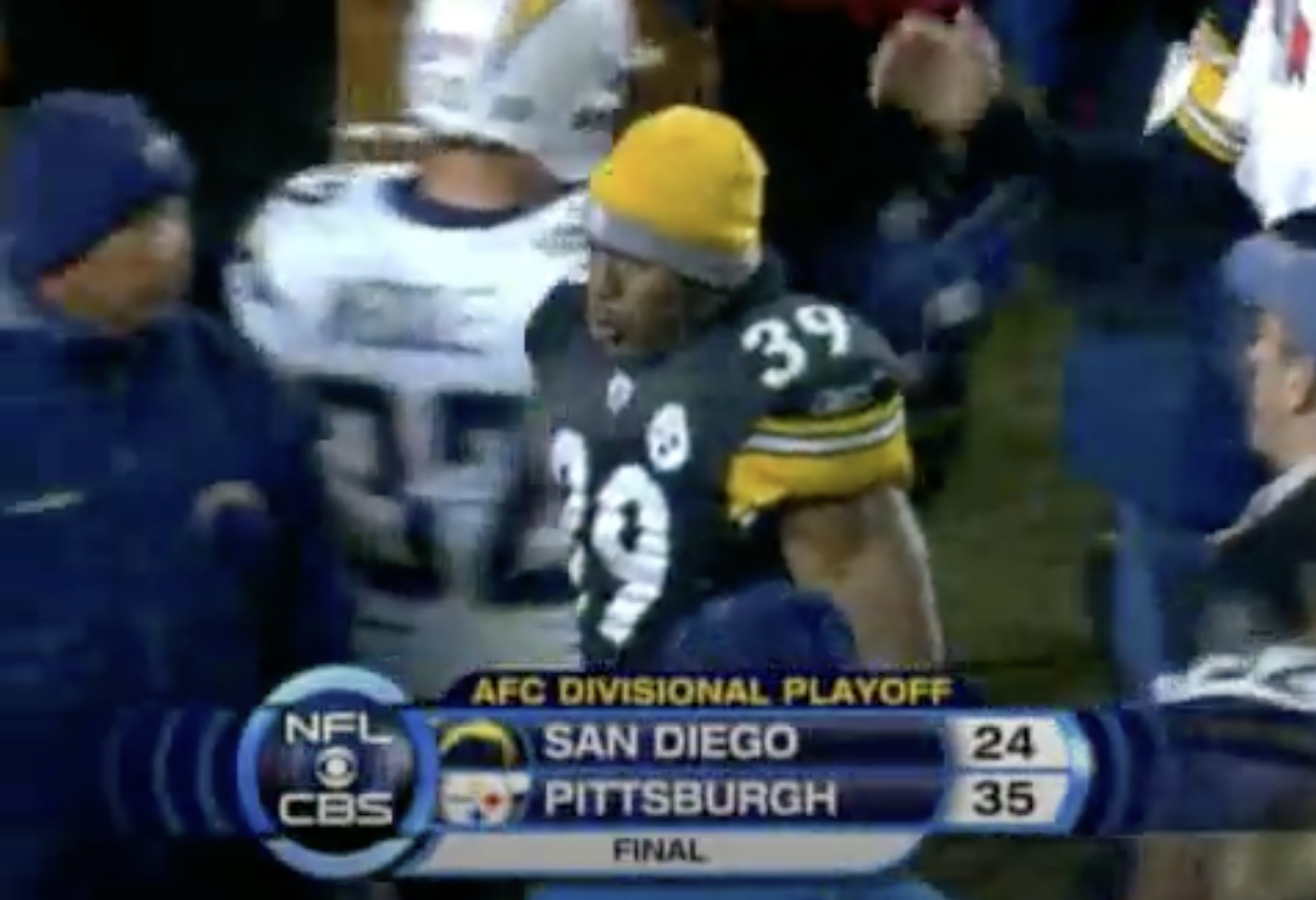 Two years into the Mike Tomlin era in Pittsburgh, the Steelers looked like one of the best teams in the NFL once again, shaking off some post-Super Bowl XL struggles to again try and climb the mountain in the NFL.

Following a disappointing loss to the Jacksonville Jaguars in the 2007 Wild Card round at home, the Steelers under Tomlin looked to rebound in a big way in 2008, this time opening up against the then-San Diego Chargers at Heinz Field in the snow.

Just a few short weeks after beating the Chargers at Heinz Field 11-10 (yes, you read that right), the Steelers welcomed Philip Rivers, Antonio Gates and the Chargers into Heinz Field for the AFC Divisional Round matchup on January 11, 2009.

The Chargers were without star running back LaDainian Tomlinson, and the Steelers were well-rested, coming off of the first-round bye after winning the AFC North and claiming the No. 2 seed behind the Tennessee Titans.

In the snow and on a cold night at Heinz Field in Pittsburgh, the Steelers leaned heavily on a dominant ground game, rushing for 165 yards and three scores in the win, cruising to the 35-24 win that was much closer on the scoreboard than it was on the field.

The divisional round matchup didn’t start well for the Steelers though as the visiting Chargers, who were not used to playing in below-freezing temperatures, started red-hot as Rivers hooked up with Gates for 21 yards on the first play from scrimmage.

Two plays later, Rivers found running back Darren Sproles — starting in place of Tomlinson — for 12 yards, before finding star receiver Vincent Jackson behind the Steelers’ defense for a 41-yard touchdown two minutes into the playoff game.

Following the quick Charger score, the Steelers turned to the ground game as Willie Parker ripped off a 12-yard run to open the game offensively for the Steelers, before then adding runs of 2 and 8 yards. Ben Roethlisberger then found Heath Miller for 11 yards, but the Steelers’ drive stalled, resulting in a pooch punt from Roethlisberger.

The Chargers quickly went three-and-out thanks to a strong rebound from the Steelers’ offense, and on the ensuing punt from San Diego’s Mike Scifres, Steelers’ standout receiver and punt returner Santonio Holmes sparked the home crowd with an electrifying 67-yard punt return for a touchdown, knotting the game at 7-7 midway through the first quarter.

Holmes made a couple of defenders miss before skipping into the end zone with 7:41 left in the first quarter of the AFC Divisional Round matchup.

With the game tied at 7-7, the Steelers and Chargers traded possessions before Mike Tomlin and Special Teams Coordinator Bob Ligashesky called for an ill-advised fake punt on the Steelers’ side of the 50 yard line, which resulted in Steelers’ safety and up-man Ryan Clark getting stuffed on the direct snap, giving the Chargers a short field to work with.

Six plays later, following completions from Rivers to Gates for gains of 15 and 8 yards, Chargers kicker Nate Kaeding drilled a 42-yard field goal, giving the Chargers a 10-7 lead with two minutes left in the first half.

The Steelers wouldn’t go quietly into the half though, as Roethlisberger found Holmes for a gain of 15 yards on the first play of the drive, before then finding running back Mewelde Moore for 9 yards, forcing a Chargers’ timeout.

Roethlisberger later found receiver Hines Ward for 14 yards before then firing a strike to Ward down the middle for 41 yards, setting up the Steelers inside the Charger 5 yard line late in the first half.

One play later, Parker took a toss off left tackle into the end zone from 3 yards out, sending the Steelers into the half with a 14-10 lead at home.

Opening up the second half, the Steelers’ offense marched right down the field on the Chargers’ defense, going 77 yards in 13 plays.

Parker ripped off a 13-yard run early in the drive before Roethlisberger found Holmes for 10 yards and then found receiver Nate Washington for 18 yards. Roethlisberger then hooked up with standout tight end Heath Miller for a gain of 18 yards, before then hitting Miller on a rollout for an 8-yard touchdown, giving the Steelers a 21-10 lead with 7:10 left in the third quarter.

Two plays after the Steelers’ touchdown, the Chargers turned the football over as Rivers was intercepted on a tipped pass by Steelers linebacker Larry Foote, thanks to great handwork by defensive end Brett Keisel who got his hands into the throwing lane and broke up the pass.

The Steelers moved the football down the field, but two key defensive stands by the Chargers on short-yardage situations by Steelers’ fullback Carey Davis turned the football over deep in San Diego territory.

Pittsburgh’s defense held the Chargers deep in their own end though, forcing another punt by Scifres. Two plays after regaining possession, Roethlisberger targeted Washington deep in the end zone that drew a pass interference penalty on Chargers’ safety Eric Weddle, giving the Steelers the football on the 1 yard line.

That’s when Gary Russell made his way to the stage, punching the football in from 1-yard out for a 28-10 lead.

The Chargers responded quickly though as Rivers heated up, hitting tight end Brandon Manumaleuna for 14 yards and Sproles for 11 yards, and later finding receiver Chris Chambers for 25 yards. One play after finding Chambers, Rivers found receiver Legedu Naanee from 4 yards out, making it a 28-17 game with 9:13 left in the game.

With the Chargers trying to mount a comeback, the Steelers leaned heavily on the rushing attack as Parker took over down the stretch, ripping off a 27-yard run on the ensuing drive, before capping off the scoring for the Steelers with a 16-yard sprint off right tackle for the touchdown, giving the Steelers a 35-17 lead with 4:17 left in the fourth quarter.

Late in the game down two scores, the Chargers struck quickly as Rivers found Sproles streaking over the middle for a 62-yard touchdown to make it a 35-24 game, but the Steelers recovered the ensuing onside kick attempt, allowing backup quarterback Byron Leftwich to kneel out the win, sending the Steelers into the AFC Championship Game against the Baltimore Ravens at Heinz Field one week later.

In the win over the Chargers, Parker dominated, rushing for 146 yards and two scores on 27 carries, while Roethlisberger threw for 181 yards and a touchdown. Defensively, the Steelers held the Chargers to just 15 rushing yards in the win while sacking Rivers four times in the game.