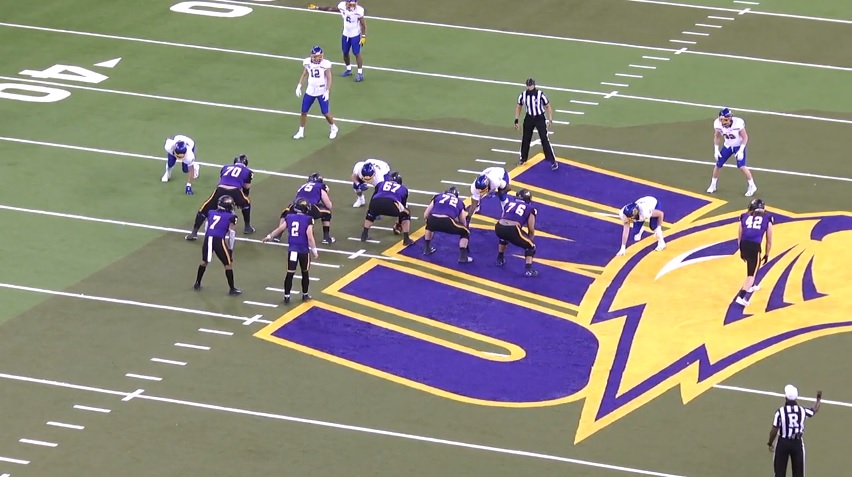 -Has good speed and athleticism that pair well with his massive size
-Possesses the arm length (34 7/8”), wingspan (83 1/2”), and hand size 10 1/8”) you like to have for an offensive tackle prospect on the outside
-Easy mover in space in the run game, being able to combo off to the backer or climb to the 2nd level and pick off smaller defenders as a lead blocker
-Plays with a great motor and will look to take his block through the whistle
-Plays with a nasty demeanor you want to see from an offensive lineman, priding himself on takedown/pancake blocks
-Enjoys enforcing his will on defenders he knows are not as strong as him in the run game
-Impressive play strength leads to him tossing defenders aside or uplifting them off of the ground
-Washes defenders away in the run game when down blocking, clearing a massive hole to run through
-Has the athleticism to get out on screens and counter/pulls and lead the way for the back
-Plays with a strong, wide base in pass protection with good hip bend to sit in and anchor against the rush
-Has an active vertical pass set to set the depth of the pocket
-Able to mirror effectively laterally on the pass rush
-Able to hit and replace with his hands in pass protection with good hand placement inside the defender’s chest

-Will lean too far forward at times, causing him to fall off of blocks as a run blocker
-Could be more consistent with his hand placement on his run fits
-Will go downfield on play action/RPO plays aggressively trying to pick up blocks, being susceptible to penalty at the next level
-Can stand to do a better job getting the angle on the reach block on a defender rather than going for the takedown block
-Level of competition can be a concern when debating how he would fair against Power-5 talent

-Redshirt Senior Prospect from Clear Lake, IA
-Recognized as a team captain in HS at Newman Catholic
-Also lettered in basketball and track and field
-Wasn’t highly recruited coming out and signed with Northern Iowa, redshirting his first year on campus
-Saw action in four games as a redshirt freshman, playing at RG
-Played and started all 15 games in 2019, playing at LT
-Played and started all 6 games playing in the spring of 2021 as a redshirt junior at LT

Trevor Penning from Northern Iowa had the pleasure of playing on the opposite ide of recent draftee Spencer Brown in 2019 who was selected in the third round by the Buffalo Bills. With the Panthers’ season being moved to the spring of 2021, Penning had the opportunity to show what he could do as the lead man upfront with Brown pursuing a career in the NFL. Penning didn’t disappoint, showcasing a blend of athleticism and physicality that we saw on tape with Brown when he went through the process.

Penning is a mammoth of a man in his own right when compared to Brown in terms of size, standing over 6’7 and topping the scales at nearly 330lb. He has the arm length, wingspan, and hand size that scouts are looking for in bookend tackle prospects, suggesting his measurables won’t be the reason he doesn’t make it on the outside. His physical tools are also impressive, being a weight room warrior as well as Brown was. His strength and power are on another level, as this video shows Penning breaking the all-time back squat record for the football team this spring at 625lb.

Penning strength in the weight room transfers over to the football field rather smoothly. He is a strong run blocker, being able to blow downed defensive linemen off of their spot in the run game. Here is a clip of Penning starting at RG a couple years back against Iowa State, picking up the defensive end on the down block and runs him away from the play, finishing on top of him as he springs his tailback to the second level.

Penning wound up moving to LT in 2019 and didn’t see any drop off in play. His physicality and nastiness as a run blocker remain evident on the outside of the OL as they were on the inside. Watch this play action boot rollout pass to the right as the OL sells the run fake to the left with Penning picking up the DE and runs him clear to the sideline on the opposite side of the field, putting him into the bench through the echo of the whistle.

Penning is a guy that you will have to say “Woah” rather than “Sick ‘em” as a coach. His plays with a nasty demeanor and wants to physically impose his will on you as a blocker. Watch this rep on the jet sweep to the right where Penning climbs to the second level of the defense after chipping on the end, picking up the CB in the secondary by showcasing his acceleration in the open field and gets on the defender’s shoulder, proceeding to run through his face (see what I did there) and plants him into the turf.

This combination of movement skills and effort to make the block on the opposite side of the field away from the play show Penning’s motor to execute his assignment effectively to the best of his ability.

As mentioned earlier Penning is a brutal down blocker in short yardage and goal line situations when matched up with a smaller defender across from him. Check out this play against North Dakota State where Penning blows his man up from the snap, knocking him off of his feet and into the pile to clear a nice running lane for his RB to run through.

If I had to point out one potential flaw in Penning’s game as a run blocker, it would be his ability to get the angle on his reach blocks to turn the defender’s shoulders away from the play. On this rep against South Dakota State, we see Penning get a good initial lateral step to the left for the reach block but fails to commit to turning the defender inside by working leverage on the defender’s outside shoulder. He ends up planting the defensive lineman into the ground anyway in humiliating fashion, but should Penning get the reach block, a nice lane would open up between he and the TE for the back to shoot through, potentially sealing off the other defenders inside as well for more yardage to be gained.

So, we have seen Penning operate as a devastating run blocker, but how does he hold up in pass protection. Frankly, pretty good to be honest with you. Unlike his counterpart Spencer Brown, Penning has a dense frame that is evenly distributed between his upper and lower half. Couple that with good hip bend to sit down and anchor against the pass rush as well as quick feet that can mirror side-to-side, and you have yourself a good pass blocker at OT.

Watch this rep against the Jackrabbits where Penning plays with his outside foot back in his pass set to set the depth of the pocket on the snap, and then is able to adjust laterally to the defender crashing inside on him, proceeding to mirror him down the LOS with his inside the defender’s chest and chucks him down to the ground like a rag doll at the end of the rep just because he can.

Here’s another quick pass rep from the same game showing Penning’s patience on the snap to not lunge forward and be in good position for the defender to come to him with active feet and hands, handling the spin move well as the defender tries to counter outside, making him try to go back inside after being stalled on his rush.

His long arms and strong base help him stonewall edge rushers hoping to get the corner of the pocket, playing under control and with good balance like we see on this rep against Illinois State.

Another good example of Penning using his length to his advantage against the Bison where he rides the edge rusher up the pocket, getting a hand inside the defender’s shoulder and tosses him to the ground and finishes on top of him for the after the defender gives Penning his backside.

Here’s a good example of Penning playing with good leverage to anchor in against the rush and use the defender’s momentum against him against former Minnesota State University, Mankato DE #98 Brayden Thomas who I actually worked with quite frequently in the strength and conditioning department for the Mavericks. He transferred to NDSU this season for more exposure, and he sure gets it on this play, trying to get the arm under rip move on his speed rush against Penning, but Penning does a great job getting his hands inside Thomas’s chest, getting Thomas off-balance and Penning proceeds to finish him like the rest of his competition by chucking him to the floor like a bouncer at the club, finishing on top of him as his QB finds the open receiver in the end zone for the score.

I guess you can say that Penning leans forward on this rep instead of sitting his hips down more, but he is still in good position to stall the rush and gets the hands placement along with the anchor to easily win the rep.

Overall, I came away extremely impressed with Penning’s film in the pandemic-impacted season he had in the spring. He is position versatile, having starting experience at guard and tackle, and could figuratively kick inside to guard at the next level and be a dominate force on the interior.

However, his athleticism, footwork, and length make him more than qualified to hold his own at OT to start out in the league, being a candidate you draft as a tackle first where he has to prove to you he can’t do it and then can be kicked inside to guard to be a great option upfront in the run game especially.

While watching his film, the nastiness along with the movement skills and size kept bringing me back to Taylor Lewan when he came out of Michigan as a big, athletic, and mean blocker who was a strong run blocker and capable blindside protector.

Obviously Lewan played against better competition in college, and Penning will have to show he can hold up against more skilled pass rushers on the edge. My eyes will be on the September 4th matchup with another draft prospect Will McDonald IV of Iowa State to see how he handles professional-caliber speed and talent off of the edge. The small-school label may hurt Penning initially when compared to other top tackle prospects in this class, but his strength, physicality, and technical skills in pass protection present the tools of a starting NFL-caliber tackle prospect.

Should he work to refine his ability to execute reach blocks effectively and improve some technical details, his motor, leadership, and talent should all help him hear his name called earlier than most would expect come April.