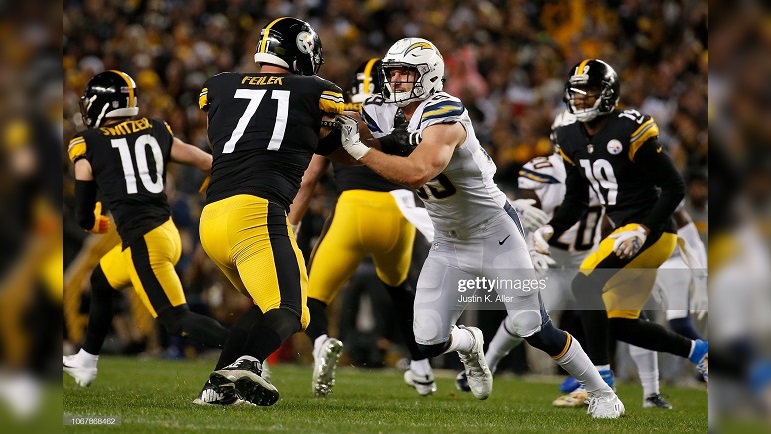 On Monday, it was reported that the Pittsburgh Steelers agreed to a one-year, $4 million deal with veteran outside linebacker Melvin Ingram and that move fills a big hole the team had on their depth chart. Ingram now marks the second former Chargers player to join the Steelers within the last month, as veteran guard Trai Turner was signed in late June to replace longtime starting guard David DeCastro, who was released due to a chronic ankle problem. With Ingram and Turner now in the Steelers fold, it sets up an interesting Week 11 game for the team.

Turner welcomed his 2020 teammate Ingram to the Steelers yesterday on Twitter by saying, “My slime!! Let’s go gang.”

Ingram, 32, is a three-time Pro Bowler after originally being drafted by the Chargers. He has recorded 49 sacks in his nine seasons with the Chargers. He did, however, deal with a knee injury last season that limited him to just seven games. He didn’t record a sack and had just 10 tackles on the season for the Chargers after earning $14 million.

As for Turner, he spent just one season with the Chargers in 2020 after being traded to them by the Carolina Panthers in March of 2020. Like Ingram, Turner had a tough 2020 season as a groin injury limited the five-time Pro Bowler to just nine games played.

In Week 11 of the 2021 season the Steelers will play the Chargers in Los Angeles and that contest will be a reunion game of sorts for both teams on Sunday Night Football at SoFi Stadium. Not only will Ingram and Turner be playing against their previous employer, but Steelers new tight ends coach Alfredo Roberts, who was hired in January to replace longtime tight ends coach James Daniel, who retired, will be doing so as well.

On the other side for the Chargers, former Steelers offensive lineman Matt Feiler, who signed with Los Angeles in free agency, and former offensive line coach Shaun Sarrett, who was hired as the to be the team’s assistant offensive line coach earlier in the offseason, will get a chance to play against their former employers in Week 11.

Feiler, who missed some games last season due to injuries, signed a three-year, $21 million contract with the Charges on March 17, 2021. He is a former undrafted free agent out of Bloomsburg University and he spent the last six seasons in Pittsburgh with the Steelers.

As for Sarrett, he didn’t have his contract renewed by the Steelers following the 2020 season, and that decision had a lot to do with Pittsburgh’s running game being horrible, as they ranked dead last in the NFL in rushing yards per game. Sarrett had been with the Steelers since 2012.