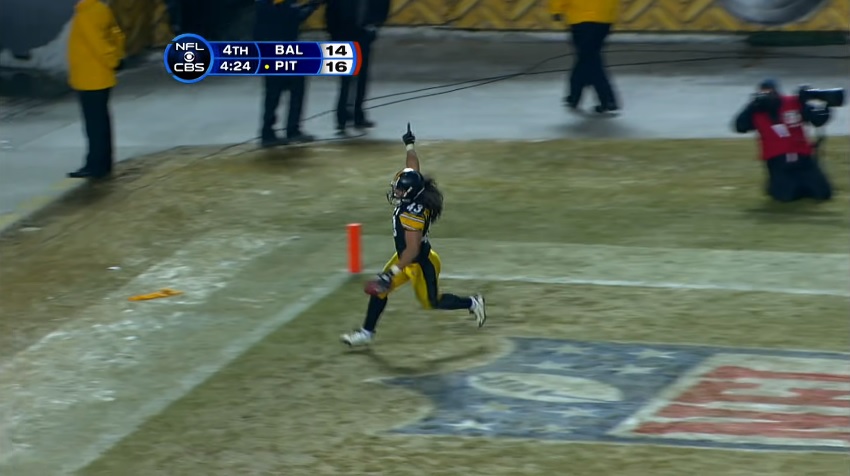 If there’s one play of Troy Polamalu’s career you probably remember more than all the others, it came in the final moments of the Pittsburgh Steelers’ 2008 AFC Championship Game against the Baltimore Ravens: Troy Polamalu’s 40-yard pick six of Joe Flacco to win the game and send the Steelers to a Super Bowl, where they’d knock off the Arizona Cardinals to capture their sixth Lombardi.

On the surface, there’s no need to explain why that play was so important and special. But to Polamalu, it meant even more than fans realize. He joined 93.7 The Fan and was asked to reflect on that moment.

“It’s all in hindsight, retrospect,” Polamalu told the show’s Jeff Hathhorn. “I just remember crossing the line and pointing because it was the first game that my wife and son had come to for a while because my son had just been born. So it was really special. And when I crossed into the end zone there, that was my first thought. And then, you know, just the energy and rush of the crowd.”

We recently revisited that play. Polamalu made the interception and had the great return into the end zone but James Harrison’s pressure was the catalyst of the play, forcing a hurried throw into Polamalu’s arms. Here’s a look at the entire moment. You can see Polamalu point to his family after running into the end zone.

Pittsburgh would beat the Ravens 23-14 and take on the Cardinals in Super Bowl 43. Thanks to iconic plays like Harrison’s 100-yard pick six and Santonio Holmes’ toe-tapping touchdown, the Steelers won that game, too, and raised the Lombardi Trophy for a sixth time.

Polamalu won his second Super Bowl after getting his first ring in 2006. Now, that two-time Super Bowl champ resume will be part of his Hall of Fame profile in Canton, Ohio. He’ll be enshrined early next month, though admitted he’s more nervous to give his speech than he probably ever was as a player.

“Oh man, it’s something I’ve obviously dreaded. I was hoping that maybe we’d get another delay. Go ahead and just put three classes together another year. So I could start writing my speech. No, it’s going to be awesome to be, to be honest, to be around all the other Hall of Famers, to be able to hear their speeches as well.”