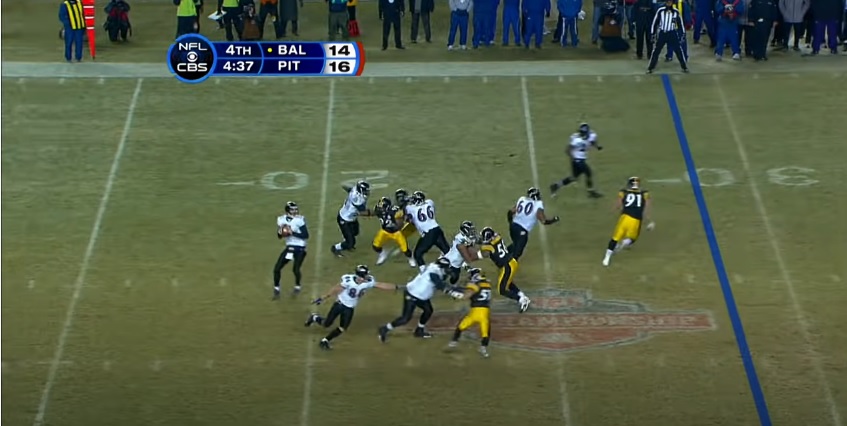 I want to focus on the underrated players who made those plays happen. For just a second, taking the focus off Parker, Harrison, Harris, and whoever else we come up with. And highlight those who made key contributions that led to those highlight reel moments.

Ok, I know the intro says the focus is supposed to be off guys like James Harrison. And for his 100 yard Super Bowl INT, we’ll be talking about another key player of the Steelers’ defense. But I’m talking about a play that happened before that one. 2008, AFC Title Game, facing Joe Flacco and the Baltimore Ravens.

You all remembered how that game ended. Troy Polamalu intercepts Flacco, cuts back – he always cut back on interceptions – and hoists the ball over his head as he crosses the goal line. Book those tickets to Raymond James Stadium.

But it begs the question. How does Joe Flacco so blatantly throw in Polamalu’s direction? The best safety in football and he basically hands it to #43 to salt the game away.

Thank Harrison for that. He was the one who provided the pressure that forced a hurried, bad throw by Flacco into Polamalu’s waiting arms. That’s the element of the play we forget. We remember the pick, the return, the touchdown. We don’t remember Harrison’s impact.

Take a look. Harrison is the ROLB against the left tackle.

Off-ball until right before the snap, Harrison came flying in full speed ahead on Ravens’ left tackle Jared Gaither. Harrison begins his rush outside but counters with an inside move, almost like a Reggie White hump move, as Gaither opens the gate and tries to seal the edge. Willie McGahee’s chip actually works in Harrison’s favor and he has the free lane to the B gap and into Flacco’s lap. Pressure causes the bad throw and Polamalu, as well as anyone, is able to capitalize. One scenic-route path to the end zone later and the Steelers were putting a bow on another trip to the Super Bowl.

Of course, Harrison himself isn’t underrated. And his name would go down in the history books with his 100-yard return the following game and oh by the way, we’ll be talking about the underrated players of that play next. But I don’t see Harrison get much credit for the pressure that led to Polamalu’s interception. And it was the key of the play. For Polamalu, it was about as easy as a pick as he ever received from a quarterback.