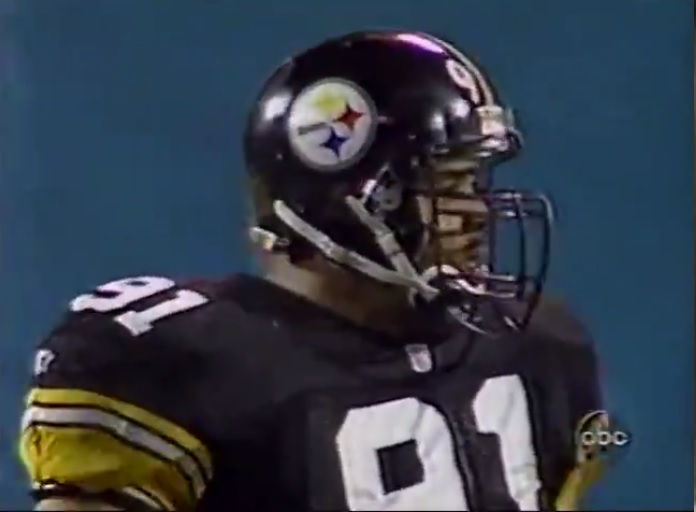 Bringing back a series we did a few years ago to get us through these next couple of weeks. Inspired by Dallas Baker’s lone career catch. It recently got me to thinking about others in that “solo” club. Players who did one thing only one time in their entire career. One rush, one pass, one interception, one touchdown, you get the idea. Truly, a blip on the radar, but Steelers nonetheless and literally, a “one” hit wonder.

There aren’t many Steelers’ defensive lineman who had just one career sack in Pittsburgh. And the only full sack of Israel Raybon’s brief NFL career came with the team. On Monday Night Football. Against Dan Marino.

If you’re only going to have one sack, that’s about as good of a way to get it.

Raybon was the Steelers’ fifth round pick of the 1996 Draft hailing from Alabama. Born in Huntsville, attended North Alabama. Inactive for ten of the team’s first 11 games, he got a hat for the team’s primetime matchup against the Dolphins.

Early in the second quarter, Raybon — #91, the LDE, ran a stunt with #93, DT Joel Steed. The game worked and Raybon came free up the middle. Marino tried to elude him but slipped and turned into a sitting duck. It wasn’t an impressive tackle but Raybon touched Marino down. Sack is a sack.

Raybon would only appear in one more game the rest of the season, the finale against Carolina. He must have impressed because the Panthers traded for him in 1997 for a 1998 draft pick. He’d play nine games, record a half-sack, and had a key pass deflection in a win over the Rams.

He would spend the next few years in the XFL and Arena League, winning rookie of the year with the Grand Rapids Rampage. Raybon was inducted into the North Alabama Hall of Fame in 2006. If you’re interested in hearing more about his story, here’s an interview he did last year.