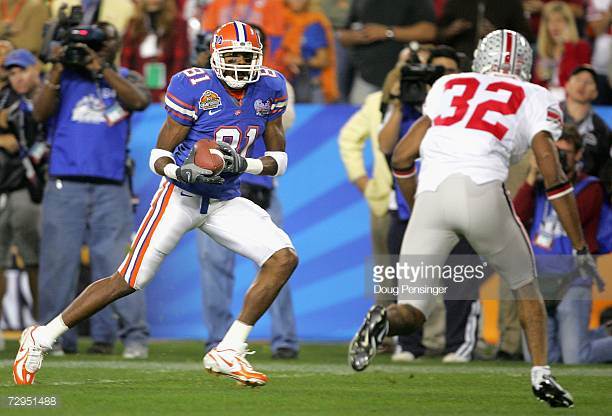 Last time, we broke down Sean Morey, listed as a receiver but in action, a special teamer to the bone. Dallas Baker wasn’t that, envisioned to be a bona fide offensive threat. He, like Morey, had strong college careers though Baker on a much bigger stage for a much bigger school – Florida.

That included a stellar senior season for the National Champ Gators, averaging over 15 yards per catch and hauling in 10 touchdowns, one every six catches, including one in the BCS Championship Game, a 41-14 drubbing of Ohio State. All those scores earned him the moniker “Dallas Baker, Touchdown Maker,” (you say the whole name, like A Tribe Called Quest).

But like Morey, he wound up being a 7th round pick, the final pick of Mike Tomlin’s inaugural draft in 2007. Blame the fall on a sub-par 40 time, barely clocking in under a 4.6, though the rest of his numbers were strong and for a big guy, the 40 time wasn’t a killer. Drafting him, Kevin Colbert envisioned a red zone threat, connecting his 6’3 frame with a penchant for making those types of receptions.

One thing we really liked about Dallas was his touchdown productivity and his size,” Colbert told the Pittsburgh Post-Gazette shortly after the draft. “We have a pretty good receiving group, but it’s not the biggest group. Sometimes, you’d just like to have another big receiver to go along with the other guys — maybe as a red-zone guy.”

But his career ended almost as quickly as it started. One the first day of training camp his rookie year, Baker walked into Tomlin’s office with one message: I want to quit.

His hometown paper, Lakeland Florida’s The Ledger, wrote a tremendous feature piece on him in August of 2016.

“I tried to quit the Steelers multiple times because I wanted to be a coach,” Baker told the paper. “My rookie year, I tried to quit. I had just signed my signing bonus. I got my check and I just really wasn’t into it. I was more excited about being at meetings than I was about practicing catching footballs.”

Baker stuck around for three seasons – I’d love to know if it was Tomlin, another coach, or player who convinced him to stay. He spent all of his rookie year on the practice squad and in the offseason, Tomlin offered some rare praise for a young guy.

“He made plays on a daily basis (in practice) that raised some eyebrows,” Tomlin said of the 6-3, 206-pound Baker. “Of course, that’s not making plays in stadiums, but it’s something to be somewhat excited about along with the rest of the young guys.”

That optimism didn’t come to roost despite making the team that yea. Appearing in eight games, he’s part of the Steelers’ Solo Club, receivers with one career catch, joining forgotten names like Tyler Grisham and Walter Young.

Which, of course, you know we have footage of. Baker’s lone catch came on a failed two-minute drill by a banged up Ben Roethlisberger, a 24-20 loss to the Colts in 2008.

He should’ve had two but earlier on that drive, he heard Gary Brackett’s footsteps and let a pass slip through his hands.

Pittsburgh released him the following week to make room for CB Roy Lewis, placing Baker on the practice squad. He never made it back onto the active roster and though they carried him to camp in 2009, he got his walking papers at final cutdowns with a waived/injured designation.

And that’s where his NFL career ended. I can’t find any record of any tryouts, camp invites, or any sort of NFL interest. Maybe that was his own decision, already beginning his career with that seed of doubt. He did serve brief stints with the AFL’s Jacksonville Sharks in 2010 and a trip to the CFL the following year, signing with Montreal before being traded.

Baker was then on his own, truly just a guy, and having to adjust to life out of football. That isn’t easy for many; in fact, Baker said it was his Steelers teammates who taught him about important financial information.

“James Farrior taught me how to write a check and Hines Ward taught me about 401(k)s,” he said in that Ledger article.

Since then, Baker’s gone into his true love – coaching. He was hired by Warner University, a small Christian school, to be their WRs coach in 2015, as they kickstarted their football program. Succeeding there, Marshall hired him for the same role two years later where he still works. And he’s imparting wisdom off the field too, not just on it.

“Coach Baker, I have nothing but the most respect for him,” one of his WRs told the Charleston Gazette-Mail in April. “He’s helping me in every aspect of my life, not just football. He’s helping me to be a man. He’s been there and done that, so I look up to him and I just want to be the best receiver and man I can be. Every time he talks, I listen and I’m being humble, soaking up everything he’s got for me.”

Dallas Baker, your blast from the past.