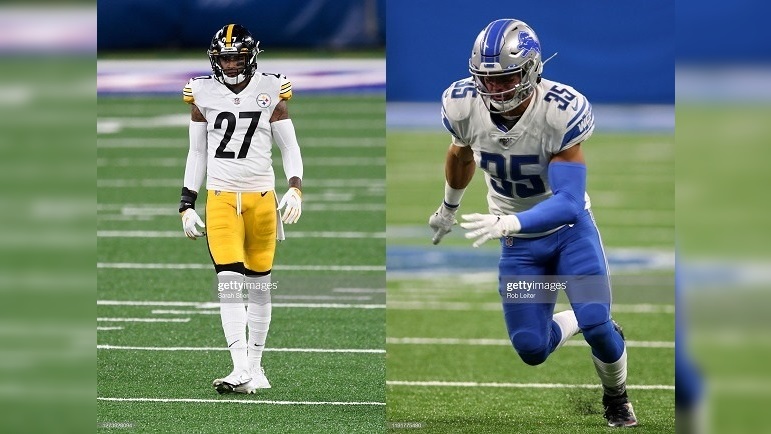 Once the Pittsburgh Steelers signed FA S/LB Miles Killebrew to a one-year deal this offseason, the question was raised whether current S/LB hybrid Marcus Allen’s spot on the roster was safe. Pittsburgh elected to re-sign Allen March 9, who was an ERFA, to a cheap deal to bring him back to compete in training camp. Both Killebrew and Allen are listed as linebackers on the Steelers team website, and both players are hybrids that are considered undersized for the linebacker position but are large safeties that are capable on coming downhill against the run yet can struggle running with receivers and backs down the field in man coverage.

The coverage aspect was what prompted Allen to make the transition last season, as he doesn’t currently possess the speed and movement skills to change direction effectively and transition to turn and run with receivers down the field. Even after the move to LB, coverage still has been a weak point for Allen as he allowed nine receptions on ten targets for 64 yards in 2020 per Pro Football Focus. He played 206 total defensive snaps in 2020, registering 24 total tackles, two TFLs, and two QB hits. Allen also registered 195 more snaps on special teams in 2020, making six total tackles on special teams. He signed a one-year, $850,000 exclusive rights tender with no guarantees.

Miles Killebrew comes over from the Detroit Lions after he spent the past five seasons with the team. He signed a one-year worth $1.127 million and a signing bonus of $137,000 with a total cap charge of $987,500 due to being a veteran salary benefit deal. Killebrew played primarily on special teams in 2020, recording 12 total tackles (10 solo) on kick and punt coverages. He tallied 361 total special teams’ snaps, playing no fewer than 59% of the snaps on special teams since he entered the league in 2016. He only played 87 total defensive snaps in 2019, but recorded 353 snaps on defense in 2017, notching three starts for Detroit and recorded 38 total tackles (32 solo), one TFL, one forced fumble, five PBUs, and one INT return for a TD. He also recorded another INT in 2016 on 149 defensive snaps as a rookie in 2016. Killebrew had a 57.9 overall grade on defense per Pro Football Focus and a 60.4 overall grade in 2016. For comparison sake, Allen had a 49.0 overall grade on defense in 2020.

Given that both players have an overall lack of experience and play time on the defensive side of the ball since entering the league, both of these guys will likely have to cut their teeth on special teams in the preseason to secure their spot on the roster. Should Ulysees Gilbert III prove to be healthy through training camp, I personally would prefer to have him be the fifth inside linebacker to make the team behind the likes of Devin Bush, Vince Williams, Robert Spillane, and rookie Buddy Johnson. Therefore, while both Killebrew and Allen carry the ‘LB’ designation, either could virtually serve as a backup strong safety that rolls up in the box as a dine backer. Based on the contract details of both players, the experience and production on defense when put into the lineup, and the contribution each player has made thus far on special teams, I would personally give the nod to Killebrew.

As Alex Kozora has pointed out in the past, Killebrew has been a special teams demon since coming into the league, recording 30 special teams tackles in his first four seasons which ranks fifth in the entire NFL during that span. He isn’t great in coverage, but he is more capable of running with backs and TEs up the seam and over the middle of the field, having more of a feel for it than Allen based on my film study. Killebrew is also more of a consistent wrap-up tackler than Allen, showing great pursuit of the football and playing through the runner’s legs to bring him down.

It will be an interesting battle in training camp and during the preseason for these two guys who share similar skill sets who will likely vie for the same roster spot. Given his size and ability to play a similar role on defense, I would love to see rookie UDFA Donovan Stiner compete for the spot as well, having some ball skills and impressive hits during his time with the Gators. However, his overall consistency in tackling and worth on special teams needs to be proven in a game situation in the league to have a chance to make the roster. Most likely, Stiner will work for a practice squad spot this season and the initial competition will come down to who can make the better overall impact between Killebrew and Allen.

What do you think about the backup dime backer/strong safety position? Do you think that there is a legit competition given the similarities between Allen and Killebrew? Who do you see as more of a favorite to make the roster? Does a rookie like Stiner have a chance to unseat either guy for a roster spot in 2021? Please leave your thoughts in the comments section below and thanks again for reading!