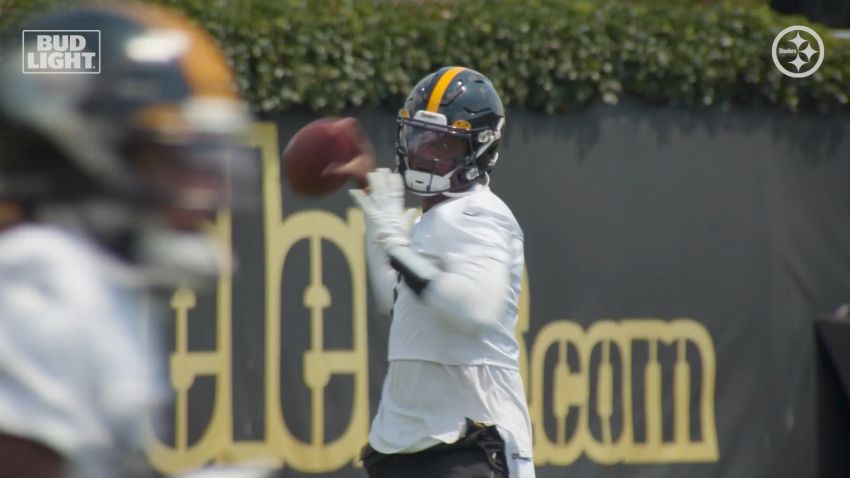 Not surprisingly, the Pittsburgh Steelers rested quarterback Ben Roethlisberger on Saturday, which was the team’s third training camp practice of 2021. With Roethlisberger resting on Saturday after working a half a day on Friday, the team was able to get a longer look at backups Mason Rudolph and Dwayne Haskins during practice. After practice was over, Steelers offensive coordinator Matt Canada was asked what Rudolph’s performance was like during practice. Canada, however, would not bite hard on the question.

“I can’t tell you details about today, but Mason’s working hard,” Canada said of Rudolph, according to a transcript from his media session that was passed along to us. “Obviously, he’s got a high expectation of himself and I think he, like everyone three days in, is having good days and bad days, good plays and bad plays. We’re happy with where Mason’s at. Got to keep getting better.”

Canada was then asked if there is confidence you could play him in a game right now, which might be an indication that the backup quarterback didn’t have a great practice on Saturday.

“Sure,” Canada said. “Definitely. We have confidence in everybody. We have to get everybody ready to go. And obviously, the beauty of the Hall of Fame game for us is we get extra time to work, extra time to practice. Like I said, we’re installing at a nice pace because we have time to do it and guys are getting reps. We feel good about where we are.”

Canada was also asked about Haskins on Saturday as well and specifically, what his impression of the former first round quarterback are early in training camp.

“We’re happy with where Dwayne’s at as far as the way he’s working,” Canada said. “I think he’s come in and really worked very hard to learn our system. He’s spent a lot of time studying what we do, how we do it, what Ben’s done. In our offense, obviously we’re making some changes, some not. But I think he’s doing everything he can.”

Canada says he has no issues with Haskins’s work ethic so far.

“His work ethic, his time in the office has been awesome so really happy with where he’s at and got to keep getting better, like we all do,” Canada said.

The Steelers released their first depth chart of 2021 on Saturday and while it doesn’t mean much in the grand scheme of things, Haskins is listed as the team’s third string quarterback behind Rudolph and ahead of Joshua Dobbs. With the Steelers first preseason game of 2021 on tap a week and a half from now, it’s beginning to look more and more like Haskins might play quite a bit in that contest against the Dallas Cowboys.

Our very own Alex Kozora will be at training camp practices starting on July 28, so you can look forward to him providing full breakdowns on not only what Rudolph and Haskins look like from a firsthand standpoint, but Roethlisberger and Dobbs as well.