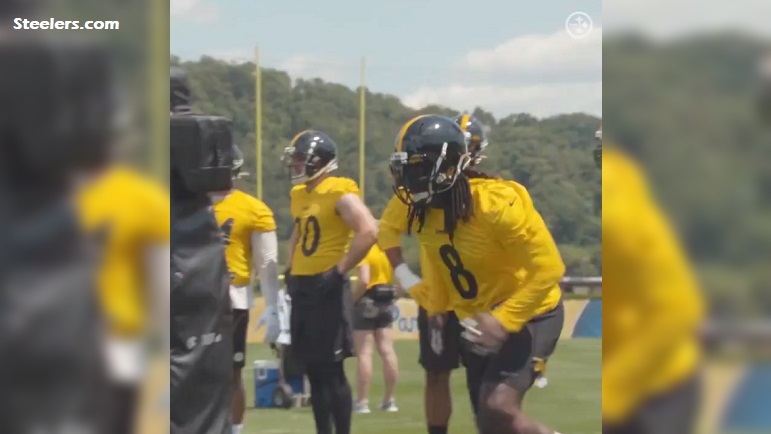 The Pittsburgh Steelers had a player wearing the No. 8 at training camp practice on Thursday and it was none other than new outside linebacker Melvin Ingram, who the team reportedly signed to one-year, $4 million contract several days ago. After Thursday’s Steelers training camp practice ended, fellow outside linebacker T.J. Watt met the media and early in his session he was asked to give his thoughts on his new defensive teammate.

“Oh, I’m excited, man,” Watt said of the Steelers addition of Ingram. “I worked with him at the Pro Bowl and obviously I used to watch Chargers games when Derek [Watt] was playing in San Diego and L.A. And just a player that has a lot of burst off the line of scrimmage. He’s got a phenomenal spin move and just seeing him in person, he’s a powerful guy and excited to work with him.”

Watt got another question later in his Thursday press conference related to Ingram and how well he knew him prior to him arriving in Pittsburgh a few days ago.

“I watched him a lot when my brother played for the Chargers,” Watt said. “I was able to watch a lot of their games. And obviously he’s one of the premier rushers, so I’ve watched a lot of his film. And then we connected at the Pro Bowl. It was two or three years ago. So, a little relationship, shoot some messages here and there. But a great guy and a really good player. So, excited to have him in the room.”

Watt was asked Thursday how he envisions Ingram being used in the Steelers defense and essentially if he thinks his new defensive teammate will just get a handful of snaps a game as a rotational backup outside linebacker.

Another media member tried to get a little bit more out of Watt when it comes to how he thinks Ingram will fit in rotationally with himself and the other team’s top outside linebacker, Alex Highsmith.

“It’s not my place to say,” Watt said. “I mean, I just know that I’m going to be at left and whoever’s at right or what the rotation looks like, and I’m just excited to have more depth, have a guy like Melvin in our rotation, in our room. A guy that I’ve watched a lot of film on over the years and a guy that I can learn a lot from too. And I’m just excited to have more depth in the outside linebacker room and excited for our team as a whole.”

As things seemingly stand upon Ingram’s arrival, Highsmith will still be the starter opposite Watt with Ingram getting snaps behind both in games as rotational player. If that’s ultimately what transpires, Ingram could wind up playing around 20 or so snaps a game with most of those likely coming at the expense of Highsmith, who is now in his second season. Watt was asked about how he thinks Ingram’s arrival in Pittsburgh might impact his own snap count and if he has a personal preference as to what percentage of plays he’d ideally like to play in a normal game.

“Me, personally, for how I play, it’s all feel,” Watt said. “I mean, I definitely think at times I feel like I need to take a little bit more rest and at times I feel like I need to play more. So, as the season progresses, it’s all about how I feel and how the coaches want to play it and everything like that. But you definitely can’t play a hundred percent of the snaps. So, anytime you have depth and rotation, it’s always a plus.”

Ingram’s addition to the Steelers is a plus indeed and no matter how the rotation ultimately shakes out at the outside linebacker position, that position group definitely should be a force in 2021 as long as the top three stay healthy all season.