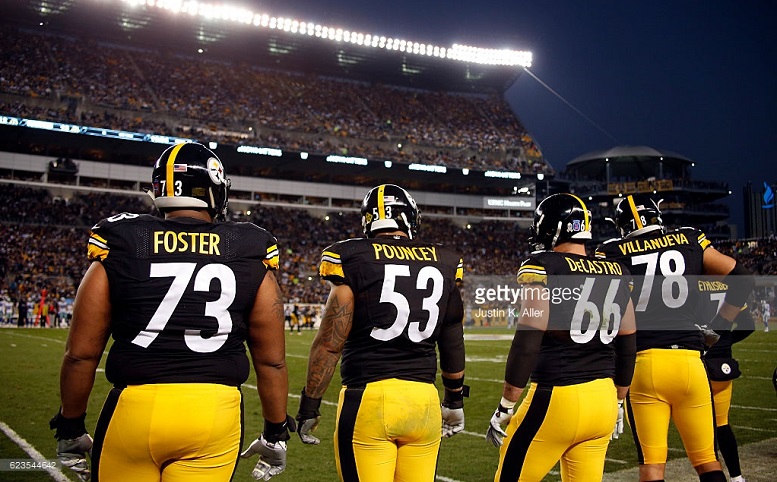 With the end of David DeCastro’s time in Pittsburgh comes the end of a chapter in team history. For years, the Steelers built up one of the best and most consistent offensive lines in football.

Over the past two years, and especially over the course of this offseason, the familiar faces have gone away. In March of 2019, Marcus Gilbert was traded to the Arizona Cardinals. Ramon Foster retired after the 2019 season. This year, Alejandro Villanueva and Matt Feiler went elsewhere, Maukrice Pouncey is moving on with life’s work, and yesterday, DeCastro was released.

What comes next is a mystery. But let’s look at the past. Because now it’s officially that. The past.

At the start of last decade, the Steelers knew they needed to revamp their offensive line. Yes, they won a Super Bowl with the most rag-tag group of players you can think of: Chris Kemoeatu, Justin Hartwig, Darnell Stapleton.

But Pittsburgh had to protect their investment in Ben Roethlisberger, who was sacked 45+ times each year from 2006 to 2009.

It began with Ramon Foster, undrafted out of Tennessee in 2009, who played the role of Swiss Army Knife his first few years before settling in at guard. Maurkice Pouncey was the first draft pick, a can’t-miss center taken 18th overall, who would be another in a long line of elite Steelers’ pivots. Marcus Gilbert was the team’s second-round pick in 2011, transforming his body and his game into an athletic, excellent right tackle.

DeCastro fell into the team’s lap with the 24th pick of the 2012 draft. Few thought he’d make it that far, but the organization jumped on the chance. Alejandro Villanueva was the longshot who paid off, an Army Ranger turned defensive lineman turned offensive tackle. Later, Matt Feiler would take a similar path as Foster and Villanueva, undrafted players who developed and ascending into the starting lineup.

Roethlisberger’s sack numbers immediately decreased. In 2009, teams dropped him a league-high 50 times. In 2010, that number (granted, in 12 games) fell to 32. His sack rate dropped to the lowest at that point of his career, just 5.1%, in 2014. And since 2016, he’s been among the least-sacked quarterbacks in football, maybe becoming the first passer to ever be the most-sacked and least-sacked guy at separate points in his career. Some of that credit goes to Roethlisberger changing his style of play. But it goes to a consistently strong unit up front who protected him.

In this era of free agency, big money contracts, and teams constantly having to reload, it was remarkable to see the Steelers’ group stay together. All of them, Foster, Pouncey, Gilbert, DeCastro, and Villanueva received second contracts. In 2019, for the first time in franchise history and as the only active unit in the NFL, three different lineman – Foster, Pouncey, and DeCastro – had 100+ starts with the team.

Sunday will mark David DeCastro's 100th NFL start. The Steelers will have three active offensive linemen with 100+ starts for the first time in franchise history.

But all good things come to an end. Last year proved this unit wasn’t its same old self. They were older, not as physical, not as mobile, and battled injuries across the board. 2020 was DeCastro’s worst season in the NFL, coming off ankle surgery and battling some sort of muscle injury for probably the entire season. The weight of the pandemic took its toll, too.

It was an unceremonious end to that group. A year filled with criticism and critique; much of it deserved but hopefully not detracting from the career that group had. It’s possible the Steelers build another great offensive line somewhere down the road. Hopefully with this future group of guys like Kevin Dotson, Kendrick Green, Zach Banner, Chukwuma Okorafor, and Dan Moore Jr. Ideally, some combination of those names stick.

But just like finding a franchise quarterback, it’s rare, difficult, and all the pieces have to fall into place to build up an elite offensive line across the board. Discovering one great talent is tough enough. Good offensive lineman are hard to find and harder to keep.

The Steelers executed on their commitment to build a great offensive line. And they created one of the most solid starting fives the franchise has ever known.