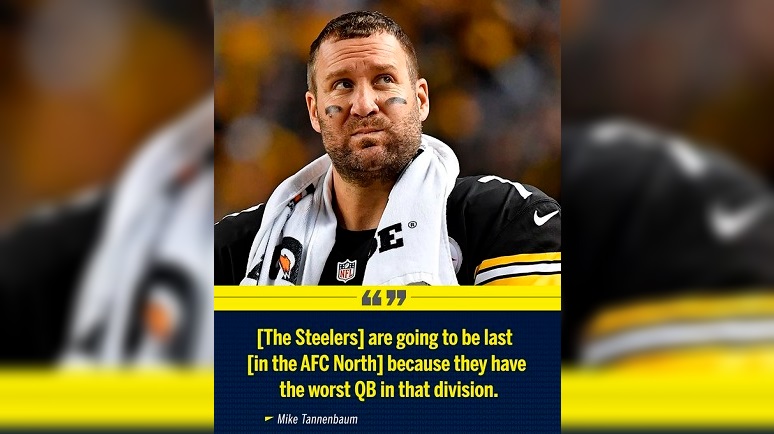 Former NFL general manager Mike Tannenbaum doesn’t think the Pittsburgh Steelers will repeat as AFC North champions in 2021 and his main reason for thinking that is the same reason, he gave last August. Basically, Mike Tannenbaum believes Steelers quarterback Ben Roethlisberger will be the main reason why the team fails to repeat as AFC North champions in 2021. Tannenbaum even went as far as to say once again that Roethlisberger is the worst quarterback in the division entering 2021.

“I disagree and here’s why,” Tannenbaum said on ESPN’s Get Up! show on Wednesday when asked if he agrees or disagrees that the Steelers will repeat as AFC North champions in 2021. “They’re going to be last because they have the worst quarterback in that division. And Joe Burrow, Lamar Jackson and Baker Mayfield are getting better. Ben Roethlisberger is getting older. With a new left tackle and a new center, they’re going to be bad this year and it’s going to get worse next year.”

Does any of what Tannenbaum said a few days ago sound familiar? It should, because it’s really pretty much the same thing he said ahead of the start of the 2020 season when predicting what kind of year the Steelers would have.

“At some point in the season, there will be a consequential play that Ben Roethlisberger is going to need to make. Because of all the money he’s made and all the championships he’s won, I’d rather see the ball in the hands of Lamar Jackson, Baker Mayfield, or even Joe Burrow,” Tannenbaum said last August. “Because those three AFC North quarterbacks, it’s all in front of them. I don’t want a QB in Ben Roethlisberger at 38 who’s played two games in two years. I’ll take my chances with Burrow and Mayfield. Pittsburgh may have the 4th best QB in the AFC North this year.”

Well, while Roethlisberger certainly wasn’t the best quarterback in the AFC North last season, he wasn’t the worst. That distinction went to Cincinnati Bengals quarterback Joe Burrow. Roethlisberger led the Steelers to an 11-0 start last season and was even considered a legitimate NFL MVP candidate before the wheels came off in the team’s final five games. That bad end-of-the-season stretch, that included the Steelers losing five of their last six games, also included Roethlisberger unfortunately not playing very well at all.

The way the Steelers and Roethlisberger ended the 2020 season will likely result in many more major media analysts being down on the Steelers this coming season. Roethlisberger is no spring chicken, so the 39-year-old quarterback has quite a chore ahead of him in 2021 when it comes to proving analysts such as Tannenbaum wrong once again.