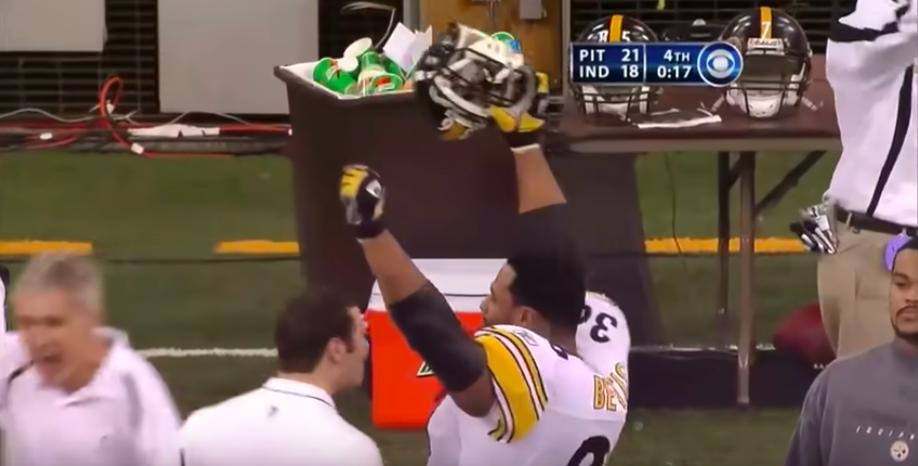 Last week Yahoo Sports asked on Twitter which sports moment you wish social media were around for.

Naturally, it got me thinking about something Pittsburgh Steelers related, and I quickly settled on the 2005 Divisional Round matchup between the Steelers and Indianapolis Colts at the old RCA Dome.

I wish Twitter were around for the Bettis fumble and Mike Vanderjagt missed kick in 2006 on the way to Super Bowl XL. To ride that wave of emotions would have been WILD for Yinzers https://t.co/ynWGK46Go2

That 2005 season holds a special place in my heart and mind for many reasons, one of which includes seeing my favorite team reach summit the mountain that was the NFL, winning Super Bowl XL.

But so much happened along the way, including this thrilling divisional round showdown between the vaunted Steelers’ defense and future Hall of Fame QB Peyton Manning in the dome on the fast turf. What transpired in three-hour, 18-minute game was one of the wildest games I’ve ever seen in the NFL, featuring so many ebbs and flows, including two late, jaw-dropping turn of events from each team.

All that leads up to my Sunday Flashback here at Steelers Depot, featuring the divisional round showdown.

The Sunday, January 15, 2006 game came one week after the Steelers stormed into Paul Brown Stadium in Cincinnati and pulled out a 31-17 win over the AFC North rival Cincinnati Bengals, setting up a second-round battle with the No. 1-seeded Colts, who were nearly unstoppable that season, going 14-2 in the regular season.

That didn’t bother the Steelers though, who got started quickly on the road.

On the second play from scrimmage, Ben Roethlisberger found tight end Heath Miller down the left sideline for 36 yards off of play-action, kick-starting a game-opening drive that saw Roethlisberger put on his best Manning impersonation, carving up the Colts through the air.

Following the completion to Miller, Roethlisberger then found Miller for 18 yards over the middle, then found Antwaan Randle El for 11 yards, eventually setting up a 6-yard strike to Randle El — a play very similar to the 5-yard touchdown to Hines Ward the week prior — giving the Steelers a stunning 7-0 lead a little over five minutes into the game.

Pittsburgh’s defense then stepped to the plate and quickly shut down the high-powered Colts’ attack, forcing a three-and-out, but the Steelers’ offense gave the football right back as Roethlisberger was intercepted by Cato June on a throw he was hit on, giving the Colts the football near midfield.

Indianapolis did nothing with the ball though, trading three-and-outs with the Steelers before Roethlisberger and Ward hooked up for a 45-yard catch-and-run, tacking on another 15 yards at the end of the play thanks to a facemask penalty by Colts’ safety Bob Sanders.

That play showed off just how strong of an arm a young Roethlisberger had, firing a seed on the post to Ward, getting him the football in enough time to protect himself from the big hit coming from Colts’ safety Mike Doss, ultimately allowing Ward to slip out of the tackle and race downfield.

Two plays later, Roethlisberger fired a strike to Miller from 7 yards out, giving the Steelers a 14-0 lead on the road late in the first quarter, silencing the packed RCA Dome.

Things stayed relatively quiet on both sides into the second quarter before the Colts found some life offensively, as future Hall of Fame running back Edgerrin James chewed up yardage on the ground, ripping off runs of 10 yards and 15 yards, while Manning found tight end Dallas Clark for 21 yards, pushing the football into Steelers’ territory. Manning then found receiver Bryan Fletcher for 11 yards, and James gained 9 yards on the ground, but the Steelers’ defense held, forcing the Colts to settle for a 20-yard Mike Vanderjagt field goal, making it a 14-3 game — a score that would hold until the half.

Coming out of the half, the two teams got off to a slow start in the second half, trading a handful of punts back and forth before the Steelers’ defense made a play.

With the Colts pinned deep in their own end late in the third quarter, Manning dropped back to pass on third down and was swarmed by Steelers’ veteran linebacker James Farrior for what looked like a surefire safety. Instead, Manning was able to get his knee down at the 1-yard line for a 8-yard loss, forcing the Colts to punt the football away.

The punt by Indianapolis’s Hunter Smith traveled to midfield, where Randle El was able to rip off a 20-yard return, setting the Steelers up at the Colts’ 30-yard line.

Six plays later — all runs — Hall of Fame running back Jerome Bettis plunged in from 1-yard out, giving the Steelers a seemingly insurmountable 21-3 lead with 1:30 left in the third quarter.

The Colts wouldn’t fold though, as on the sixth play of the Colts’ ensuring drive, Manning found Clark for a 50-yard jaunt that ended in the end zone, giving the Indianapolis faithful life inside the RCA Dome, making it a 21-10 game with 14:22 left in the fourth quarter.

Pittsburgh went on a lengthy drive that was heavy on the ground game, but after converting two consecutive fourth-and-short plays, the Steelers’ luck ran out and veteran punter Chris Gardocki had to punt it away.

The very next play from the Colts, Manning found Reggie Wayne for 24 yards, setting up one of the more pivotal plays of the game.

Dropping back near midfield, Manning fired over the middle looking for Fletcher, but Hall of Fame safety Troy Polamalu undercut the throw for the interception and then fumbled and recovered the football as he got to hit feet. The Colts challenged the play arguing Polamalu didn’t complete the catch, which the officials agreed with, wiping out the interception.

Four plays later, after back-to-back 20+ yard completions from Manning to Marvin Harrison, the were in the end zone on a 3-yard James run. Manning then found Wayne in the back-left corner of the end zone on the 2-point try, making it 21-18 with 4:20 left in the game.

Pittsburgh tried to drain the clock from there, but the Colts’ defense held, setting up another Indianapolis drive. That’s when Farrior and Joey Porter stepped up and sacked Manning twice in three plays, giving the Steelers the football at the Colts’ 1-yard line with 1:20 to go and a chance to put the game away for good.

Thankfully, Roethlisberger was able to make the shoestring tackle on Nick Harper, keeping the Colts out of the end zone.

Following two quick throws that gained 30 yards, Manning tried to go for the win, but rookie cornerback Bryant McFadden made one of the most underrated plays of the game and the playoff run as a whole, breaking up the shot play from Manning to Wayne in the front-left corner of the end zone.

Two plays later, Vanderjagt pushed one way right for the missed field goal, helping Bettis — in his final season — and the Steelers dodge a proverbial bullet on the road, sealing the thrilling 21-18 win, sending the Steelers to Denver the following week for the AFC Championship Game against the Broncos.