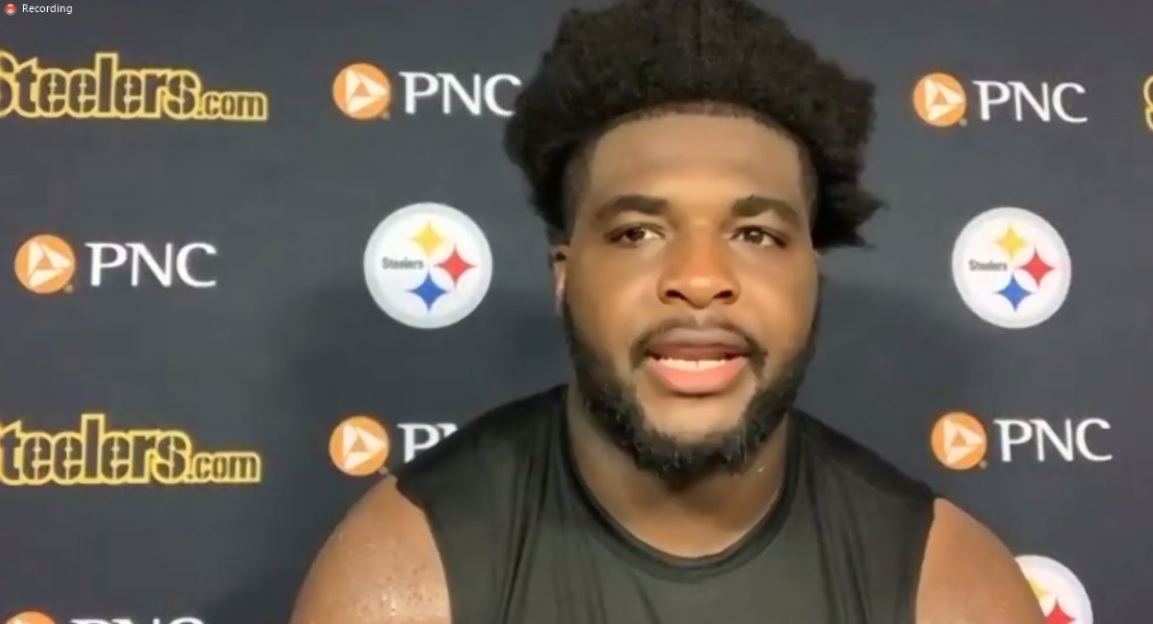 Entering a contract year while switching to a new position could make for a tough 2021 season for Pittsburgh Steelers’ left tackle Chukwuma Okorafor.

CBS Sports’ Chris Trapasso doesn’t believe so though, listing Okorafor as his top player primed for a breakout in a contract year Thursday, stating that the Steelers’ left tackle will be viewed as one of the better young left tackles in football after the 2021 season, all while commanding a hefty raise.

Trapasso might not be far off with that assessment, especially after hearing new Steelers’ offensive line coach Adrian Klemm’s comments Thursday. Speaking to the media following mandatory minicamp, Klemm says he’s been impressed by Okorafor so far in his move to left tackle after spending the first three seasons with the Steelers at right tackle.

“I’ve always thought that Chuks, he’s such a talented individual. He’s so athletic, the one thing you’d just like to see him is be a little more physical, and that’s one of the things even without pads, we’ve seen him more willing to be that. I think he’s a guy that is a natural left tackle, but just playing right,” Klemm said Thursday.

The move to left tackle for 2021 sees Okorafor return to his natural position where he played his final two years at Western Michigan.

Now entering a contract year, all eyes are truly on Okorafor, who is now being asked to protect Ben Roethlisberger’s blindside in what is likely the future Hall of Famer’s career. No pressure, right?

Not according to Trapasso, who has been impressed with Okorafor’s incremental growth, including what he describes as a strong 2020 season at right tackle, at least from a pass protection standpoint.

Okorafor has methodically chugged along in his developmental process since entering the Steelers organization as a third-round pick in 2018. And of course, even if it’s not rapid, growth is crucial in the justification of a breakout prediction. In his first two seasons combined, which spanned just 120 pass-blocking snaps, Okorafor allowed a pressure every 13.3 of those snaps. In a more expanded role last season, playing right tackle, Okorafor surrendered a pressure once every 26 snaps. HELLO,” Trapasso writes. “He is making the more-difficult-than-advertised switch from the right side to left tackle this season, but Okorafor is a fourth-year pro now. He’s ready for it. And the Steelers, with Ben Roethlisberger in the shotgun, are going to continue to center their offense around getting it out of his hands quickly. In 2020, Big Ben led the NFL with the quickest average time-to-throw figure (2.17 seconds) by a wide margin. Therefore, Okorafor won’t have to protect for extend periods of time, and Roethlisberger isn’t exactly at the point of his career where he hurts his blocking unit by running into pressure.

“By the end of the season, the thick, deceptively athletic punishing blocker will be viewed as one of the better relatively young left tackles in football and will command a sizable raise in free agency.”

That improvement in pressures allowed last season had a lot to do with Roethlisberger getting rid of the football quickly, so that might be a bit deceiving and could drastically change this season with a renewed emphasis on play-action in Matt Canada’s scheme, asking Roethlisberger to hold the football a bit longer.

With his athletic profile, a move to left tackle serves Okorafor well. He should be fine in pass protection in the Steelers’ scheme. Where he’ll need to make a real impact is in the run game, with Klemm wanting his linemen to play a more physical style of football this season in hopes of re-establishing a running game that was worst in the NFL in 2020.

Should Okorafor prove adept at handling the pass rush at left tackle and makes improvements as a run blocker under Klemm, there’s no doubt the Steelers will re-invest in the left tackle ahead of free agency, keeping him around long-term.