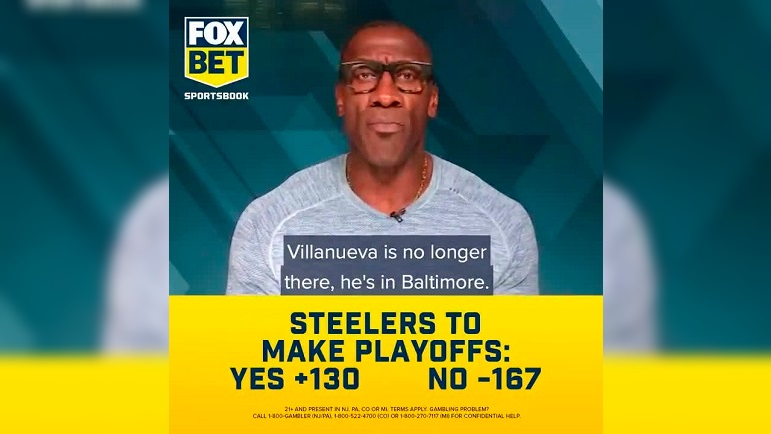 If you’re into paying a visit to the man and gambling some money on the oval-shaped pigskin this football, FOX Sports’ Shannon Sharpe advises staying away from the Pittsburgh Steelers and their +130 odds to make the AFC Playoffs, instead going with the New England Patriots and their +130 odds to make the playoffs as the AFC team more likely to punch their ticket at the end of the 2021 season.

Appearing on Fox Bet Sports Book Twitter handle June 9, Sharpe said that the Steelers are currently the third-best team in the AFC North this year behind the Baltimore Ravens and Cleveland Browns, and didn’t do enough offensively to help compliment the stout defense.

What AFC team is more likely to make the playoffs: Patriots (+130) or Steelers (+130)?@ShannonSharpe says one will do just enough to get in. pic.twitter.com/T8Ai5UR7Pd

“The Pittsburgh Steelers, although Big Ben is back, are they going to push the ball down the field? Markuice Pouncey retired, Alejandro Villanueva is no longer there. He’s in Baltimore. They still have T.J. Watt. They still have a solid defense, but I’m not so sure that they’ve done enough offensively,” Sharpe said.

Sharpe added that he did love that the Steelers added rookie running back Najee Harris because he’s a runner and receiver out of the backfield, but what the Steelers did (or didn’t) do in the offseason doesn’t match up with what New England did for the former All-Pro tight end turned TV personality, giving the edge to the Patriots as the more likely team to make the playoffs.

“I love what the Patriots did in the offseason. They get the two best tight ends in Hunter Henry and Jonnu Smith. They upgrade the wide receiver position with Kendrick Bourne and Nelson Agholor. Defensively, Kyle Van Noy is back, and they get Matthew Judon,” Sharpe said. “Stephon Gilmore’s healthy to pair him with JC Jackson and Dont’a Hightower opts back in, and Cam Newton has another year of this system under his belt. He’s healthy. I like what they’ve done.”

Though the teams might appear evenly matched on paper, Sharpe said that Patriots’ head coach Bill Belichick’s resume should help the Patriots go 10-7 or 11-6 in 2021, meaning he’s much lower on the Steelers.

“But when I look at what the New England Patriots have done, both offensively and defensively, and I look at Coach Belichick’s resume, I just like to think that they’re going to be somewhere between 10-7 and 11-6, and that will be enough to get into the playoffs,” Sharpe said. “I’m not so sure that Pittsburgh is going to be able to make it because I think they’re third as we sit right now. They’re the third best team in the AFC north behind Baltimore and Cleveland.”

That’s what they play the games for. It should make for one heck of a 2021 season in the AFC North and the overall AFC playoff picture.