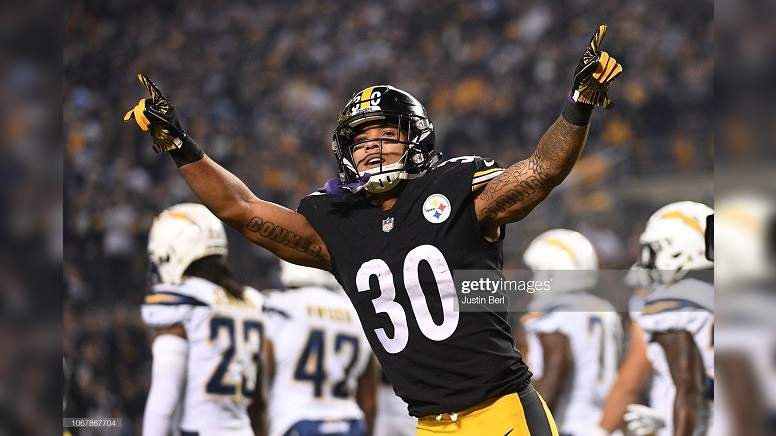 It’s said a draft class can’t be fully graded until at least three years after the picks are made. That’s why after submitting grades for every Pittsburgh Steelers pick made in 2021, I went back three years and graded every selection from the 2018 class. But why stop there? Why not continue to go back through past Steelers’ classes with even more time to prove picks good/bad, and see how well each turned out? That look back continues today with the second of the team’s third-round picks in the 2017 NFL Draft, Pittsburgh running back James Conner.

If not for persistent injuries, this entire report would be far, far different. Of them all, injuries alter this section the most. James Conner never played a full 16 games in a season. He played a career-high 14 as a backup his rookie year, and then hit 13 twice and 10 once.

Getting his opportunity when Le’Veon Bell carried his holdout through the entirety of the 2018 season, Conner started 12 of Pittsburgh’s games that season. He rushed for 973 yards and 12 touchdowns, caught 55 passes for 497 yards, and set career-highs across the board while appearing to solve the Steelers’ problem at running back. Bell left for the New York Jets, and Conner slid in as the offensive cornerstone.

He didn’t match that level of production either of his final two years in Pittsburgh. Playing 10 games in 2019, he rushed for 464 yards and four touchdowns (a career-low four yards per carry average). Behind a problematic offensive line last season, Conner upped his average to 4.3 a carry, but finished with 721 yards and six touchdowns, missing three games and starting only 11 as he ceded time to Benny Snell and Anthony McFarland Jr.

Getting three seasons as a starter in your first four years is not a bad career by any means, and recency bias lowers the recollection that Conner was really quite good when he got his first chance in 2018. He has a chance to return to that level as one of the two main backs in Arizona beginning this season, after signing with the Cardinals as a free agent.

For the fourth consecutive pick to start the 2017 draft, the Steelers received strong value for the pick they used. To get a multi-year starter in the compensatory section of the third round is a good selection. Adding to it is that Conner was the back who navigated the team through the years post-Le’Veon Bell, and had to step up a little unexpectedly when Bell carried his holdout through an entire season.

A bunch of other teams went dipping for a starting running back on Day 3 of the 2017 draft. A few found temporary solutions, but two hit the jackpot. In the fifth round, Green Bay selected Aaron Jones, who has back-to-back 1,000-yard seasons, 37 career touchdowns, and led the league in rushing touchdowns in 2019. Jones just became this offseason the rare back to receive a hefty second contract from his drafting team.

A step below Jones but a home run of a seventh-round pick is Chris Carson in Seattle, the team’s full-time starter for the past three seasons. Carson also has two 1,000-yard seasons to his credit, and 21 career touchdowns. Seattle’s Mr. Dependable, Carson didn’t score the huge deal Jones got, but did earn a two-year deal this offseason to stay in Seattle.

Both have put together better careers than Conner and are the one-two options taken 105th or later in the draft. Conner also has to contend with Marlon Mack (Indianapolis), a two-year starter, and players like Tarik Cohen (Chicago), Jamaal Williams (Green Bay), and Wayne Gallman (New York Giants), who have sniffed at starting roles but never earned the full-time gig. Mack has an argument to usurp Conner in the rankings, but Conner tops the other options.

This was dangerously close to being a copy and paste of yesterday’s section when re-grading Cameron Sutton, given that Conner went 11 picks after the Steelers’ cornerback and nearly all the top options left after Sutton’s pick were still there when Conner went.

Eddie Jackson, Chicago’s All-Pro safety and former highest-paid player at the position in the NFL, still headlines the group of alternatives over the next 32 picks. Another defensive backfield option is Rayshawn Jenkins, a two-year starter with five interceptions for the Chargers (now signed with Jacksonville). Carl Lawson is another successful pick who signed as a free agent this offseason, jumping from the Cincinnati Bengals to the Jets as a pass rusher. And mentioned above, both Cohen and Williams at running back went within the next 32 picks.

You can argue over Jenkins and Lawson and if their recent development is worth picking over Conner in a re-draft. Jackson once again is the clear leader among all these players mentioned, leaving Conner fighting for No. 2 honors (but a better pick than the vast majority of selections taken from 106-137).

James Conner is one of the best stories you’ll find in football. An Erie kid who thrives for McDowell High School in District 10 in northwest PA, who earns a chance to start at running back for the Pittsburgh Panthers. He becomes the best back in the ACC, but a cancer diagnosis halts his career. He beats cancer, returns to star once again for the Panthers, and then gets drafted by the hometown Pittsburgh Steelers and becomes the starter there. There’s a reason his jersey was the most popular in the NFL as a rookie — not a common honor for a late third-round pick, and one who doesn’t play quarterback.

Injuries robbed the football world of seeing that story continue along a successful career with the Steelers, and it robbed Pittsburgh of a long-term solution at the running back position. But for a player taken over 100 picks into the draft and nearly on Day 3, it’s hard to be disappointed with what Conner has done on the field thus far. His 2018 season proved he could be one of the better backs in the league, and he still made contributions through two down years as a starter. It’s now up to the Cardinals for how much of a starting role Conner receives.