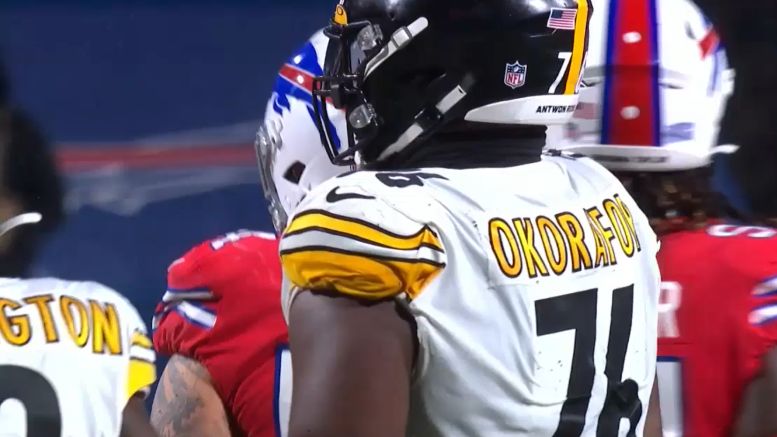 At one point in the history of the AFC North, the offensive tackle position was ruled by larger-than-life giants, such as Baltimore’s Jonathan Ogden, Cleveland’s Joe Thomas, and Pittsburgh’s Marvel Smith, not to mention Cincinnati’s Willie Anderson, who belongs in the Hall of Fame.

Now, the position still holds some name recognition across the league like Baltimore’s Ronnie Stanley and Cleveland’s Jack Conklin, but times have turned relatively tough at offensive tackle overall in the AFC North.

Knowing that, this could be a rough outlook for offensive tackles in my Ranking the Rooms: AFC North OTs edition. In years past I strictly went off of offensive line rooms as a whole, but I’m breaking it up even further this season.

Ronnie Stanley suffered a devastating knee injury last season against the Pittsburgh Steelers early in the year, but that doesn’t drop him down my rankings at all. When healthy, he’s a top five left tackle in football that thrives in the run game and is an impressive athlete that wins consistently in his pass protection.

Baltimore was wise to invest in him in the 2016 NFL Draft at No. 6 overall, and he’s been nothing short of spectacular in his time with the Ravens.

Where Baltimore has seen some change is at right tackle. After unearthing a gem in Orlando Brown Jr. at right tackle in the third round of the 2018 NFL Draft, Baltimore traded the hulking human to the Kansas City Chiefs this off-season for a first round pick and more, allowing the Ravens to avoid paying him left tackle money to play right tackle.

Without Brown Jr. the Ravens went out and added former Steelers’ left tackle Alejandro Villanueva in free agency, and signed Ja’Wuan James as well. Though James will sit out the entire 2021 season recovering from a torn Achilles, he projects as a solid starter opposite Stanley in 2022. As for Villanueva, it’s an interesting fit considering he’s not much of a run blocker, while the Ravens lean heavy on the run game.

Behind Stanley and Villanueva, the Ravens did well to add veterans Andre Smith and Michael Schofield into the mix for depth, providing experience and versatility along the offensive line. Baltimore also added rookie Adrian Ealy out of Oklahoma as an undrafted free agent, allowing him to compete for the right tackle job as well after taking over for Brown Jr. in college.

The overall depth at tackle for the Ravens is really what puts this group on top of the rankings for me ahead of the 2021 season.

One could argue that the starting duo of left tackle Jedrick Wills Jr. and right tackle Jack Conklin is the best in the division. You’d likely be right.

Where I take issue with the Browns is the depth behind those two.

Wills came in right away from Alabama and made the switch from right tackle to left tackle look so easy. He was dynamite in 2020 for the Browns, giving them a legitimate lynchpin on the offensive line. Add in the terrific play of Conklin on the right side, where he was a mauler in the run game and a stout pass protector coming over from the Titans and it’s clear the Browns are set for the next few years at the bookends.

Depth is an issue though. The Browns are still dealing with Chris Hubbard’s bloated contract as a swing tackle and could move on in training camp. Hubbard was once a starter for the Steelers and Browns and has plenty of experience, but his play has fallen off every year in Cleveland.

Behind Wills, Conklin and Hubbard, the Browns did well to invest in rookie James Hudson III in the draft, but projecting a non-Power 5 tackle to be the No. 3 right away feels like a stretch for me. It’s not much better after Hudson with names like Greg Senat and Alex Taylor vying for the fourth tackle job.

It’s a top-heavy group, one that could really struggle and derail what the Browns want to do should one of the starters go down, especially after losing swing tackle Kendall Lamm in free agency to Tennessee.

The Bengals continue to be maligned for passing on rookie left tackle Penei Sewell and instead drafting receiver Ja’Marr Chase at No. 5 overall. That confusion passing on a guy many project to be a mainstay at left tackle for years to come is largely due to the Bengals’ inability to consistently protect Joe Burrow last season.

Instead, the Bengals took advantage of other teams’ cap issues, signing 10-year veteran tackle Riley Reiff after he was cut by the Minnesota Vikings, slotting him in at right tackle, while banking on a healthy season from former top 10 draft pick Jonah Williams at left tackle.

The addition of Reiff seemingly solidifies the tackles for the Bengals, though much rides on the health of Williams, who has played in just 10 games since coming out of Alabama in 2019. If Williams is healthy and reaches his ceiling at left tackle, the Bengals are more than fine and Burrow can breathe easily. That’s a big if though right now in Williams’ career.

Behind those two though, the Bengals have some intriguing talent.

I really liked D’Ante Smith coming out of East Carolina this year, and the Bengals did a great job grabbing him in the fourth round to provide athleticism and nastiness behind Williams and Reiff. There’s a great chance Smith takes over for Reiff at some point in 2022.

Fred Johnson returns as depth at tackle and can even kick inside to guard for the Bengals. He’s impressed at times with the Bengals but has also looked overwhelmed on occasion, while Isaiah Prince will compete with him for the No. 4 tackle job for the time being. Prince comes over from the Dolphins, playing in just four career games. The Bengals like his size and athleticism, so keep an eye on him this pre-season.

Losing Villanueva hurt, no matter what way you slice it. With Ben Roethlisberger returning, losing a guy who started 90 games since 2015 and was consistently on the field protecting the future Hall of Famer’s blindside was a significant loss.

It will be up to Chukwuma Okorafor to continue to keep Roethlisberger upright this year. Okorafor makes the switch from right tackle to left tackle, where his athleticism and footwork could play a larger role. Like Villanueva though, Okorafor has struggled as a run blocker lacking push, which could play a factor in the Steelers’ new emphasis on the run game.

At right tackle, Zach Banner returns after playing just 59 snaps in Week 1 against the New York Giants before tearing his ACL. Banner won the starting job outright in training camp last summer, beating out Okorafor. Banner should absolutely help revitalize the run game, but we have yet to see how he can hold up in pass protection week to week. The Steelers bet big on him though in free agency, so he’ll have a lot of eyes on him early in 2021.

Behind those two, depth is certainly a concern. Yes, the Steelers signed veteran tackle Joe Haeg in free agency and drafted Texas A&M’s Dan Moore Jr. in the fourth round in May, but neither is moving the needle right now when it comes to depth. Haeg is certainly an experienced, decent swing tackle, but if he’s pushed into a starting role due to injury you’re in trouble. Moore needs time to develop.

Other names like Brandon Walton, Aviante Collins, John Leglue, Anthony Coyle and Jarron Jones are vying for a practice squad job at this point. It’s not pretty at tackle overall for the Steelers.