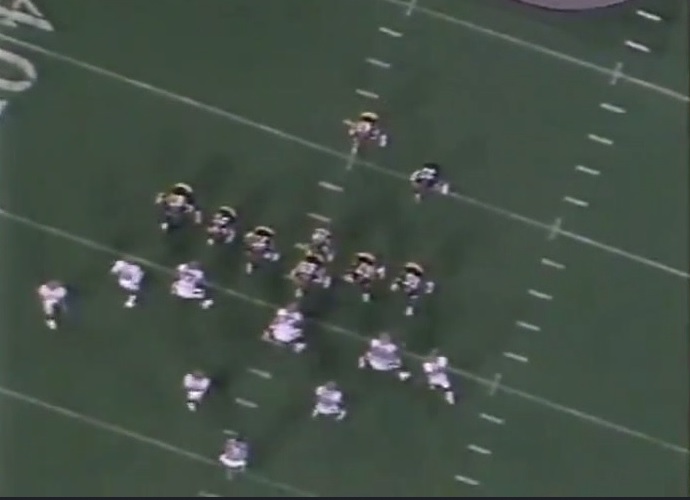 Bringing back a series we did a few years ago to get us through these next couple of weeks. At the time, we wrote about Dallas Baker’s lone career catch. It recently got me to thinking about others in that “solo” club. Players who did one thing only one time in their entire career. One rush, one pass, one interception, one touchdown, you get the idea. Truly, a blip on the radar, but Steelers nonetheless and literally, a “one” hit wonder.

Today is a reader-suggested article. So thanks to our fullback-loving buddy Dan Blocker for bringing up Randy Cuthbert’s name, a fellow fullback. Undrafted out of Duke, Cuthbert was apparently a training camp star who made the team in 1993. He spent the first seven weeks inactive and whatever playing time he got after that was primarily as a lead blocker.

But he received exactly one NFL carry. In Week 11, Monday Night Football, a comfortable 23-0 butt-whooping on the Buffalo Bills. Leroy Thompson and Merrill Hoge did the heavy-lifting, combining for 40 carries and one touchdown, replacing Barry Foster who went down with a season-ending injury. That all opened the door for Cuthbert late in the game, a seven-yard gain up the middle.

And the view of it was oh so pretty.

ABC was testing out its Goodyear Blimp Cam. And for Cuthbert’s rush, they captured it from a direct top-down view, a pretty cool though potentially disorienting angle. The seas parted up the middle, Cuthbert got upfield, and gained a healthy seven yards.

After going to the ground, a frustration-induced skirmish broke out on top of him, taking away from Cuthbert’s moment. But Al Michaels remembered, shouting Cuthbert out after the refs began to break things up.

Cuthbert would record his other offensive touch the following week, a three-yard reception against the Denver Broncos. And in the team’s playoff loss to the Chiefs, he would record a kick return of 13 yards. Those were his only NFL touches, a long history of injuries forced early retirement, giving him the distinction of having exactly one career carry, one career reception, and one career kick return.

Here’s a very specific stat of the weird. Cuthbert’s seven yards are the most of any Steelers’ running back with exactly one career carry since the 1970 merger. That might not sound like much and in the grand scheme of things, it isn’t, but try telling that to the dude who can say he had an NFL carry. Pretty cool, to me.