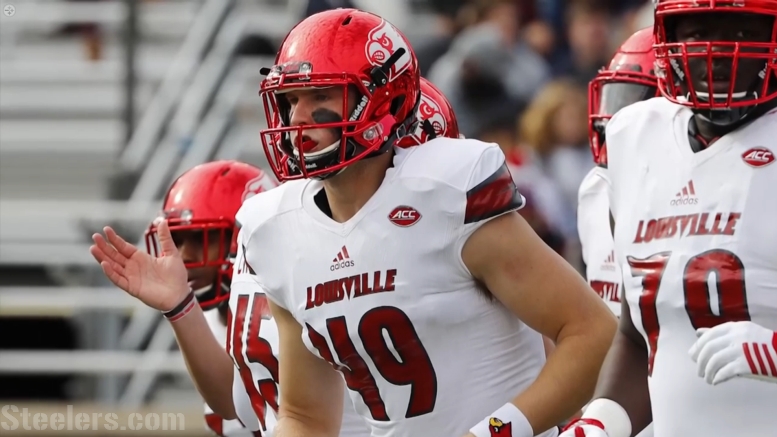 It’s said a draft class can’t be fully graded until at least three years after the picks are made. That’s why after submitting grades for every Pittsburgh Steelers pick made in 2021, I went back three years and graded every selection from the 2018 class. But why stop there? Why not continue to go back through past Steelers’ classes with even more time to prove picks good/bad, and see how well each turned out? That look back continues today with the team’s sixth-round pick in the 2017 NFL Draft, Louisville long snapper Colin Holba.

I set the precedent when concluding my 2018 retrospectives with Joshua Frazier. Any player who never suits up with the Steelers, rather than getting an outright F here, just gets an N/A instead. However, the fact that Holba never played for the Steelers after the team spent a draft pick on him will absolutely factor into the overall grade for this pick. Pittsburgh drafted Holba after 11-year veteran Greg Warren failed a physical and was cut. However, Holba lost a training camp battle against Kameron Canaday, a second-year undrafted player who played three games for Arizona the prior season. Pittsburgh cut Holba during the cutdown to 53 players in 2017.

Holba never suited up for the Steelers in a regular season game. But he has spent time with four other organizations, and taken the field in the regular season for three of them. After losing out on a job to Canaday, the Jacksonville Jaguars brought Holba in as a replacement for injured long snapper Matt Overton. Holba played seven games and 77 special teams snaps in relief of Overton, both of which remain career highs for him. He filled similar roles for the San Francisco 49ers and New York Giants in his career. He played five games in New York in 2019 (for an injured Zak DeOssie), and seven across 2018-2020 for San Francisco (six in 2018-19 for a suspended Kyle Nelson, and one in 2020 after the 49ers released Nelson).

Holba also had two stints with the Los Angeles Rams, but never as an active roster member during the regular season. His second stint ended last month when L.A. released him to make room for another snapper. Holba has carved out a small career for himself, but never as a team’s first choice for the position.

Drafting any special teams player is something I question. Circumstances, such as the Steelers’ selection of punter Pressley Harvin III this year, will occasionally warrant picking a kicker or punter. But there isn’t a set of reasons out there that can come together to justify spending draft capital on a long snapper, and that’s if the pick is in the final round. To recoup the value of a sixth round pick, Holba needed to approach the kind of career Warren did for Pittsburgh: A decade-long answer of stability at the position. Instead, he didn’t even make the roster. That’s zero value returned to the Steelers on a sixth-round selection, and Holba hasn’t returned much to the other teams he has played for.

Unlike the last two retrospectives, there isn’t a big name that’s lurking below the Steelers’ selection. No George Kittle to follow Joshua Dobbs, no Aaron Jones to follow Brian Allen. But there are still a few players who went from 214-245 who made themselves into NFL contributors. On offense, David Moore was a contributor at receiver to Seattle’s offense the last few seasons and signed with Carolina this offseason. Isaiah Ford has stepped into Miami’s offense each of the last two seasons as a depth player at the same position.

Ifeadi Odenigbo started a full season for the Minnesota Vikings last year, and the year before recorded seven sacks as a backup defensive end. He doesn’t have the sacks Odenigbo has, by Isaac Rochell played out his entire rookie deal with the L.A. Chargers, and signed with Indianapolis this offseason. The biggest miss, though, is another special teams player: Harrison Butker. The buttkicker signed with Kansas City off Carolina’s practice squad, and is one of the best in the NFL. He has his struggles with extra points, but is a career 121-134 on field goals, which is the second-most accurate percentage in NFL history. He also has a Super Bowl ring and brings in $4 million a season on an extension signed with the team.

It’s hard to look at a pick this late in the draft and say it earned an F, but in this case it’s a statement able to be made. Spending a tangible draft pick on a position teams can capably and consistently fill off the UDFA market is already a poorly used resource. But when that player fails to even make the roster as a rookie, it’s just an incredible mistake.

Holba has done his best to stick around in the NFL and has earned a fill-in spot on several rosters. He is running out of time to fight his way into a starting job, and needs to find a team after the Rams released him last month. Looking at what Pittsburgh got out of Holba, this is one of the worst Steelers’ draft picks of the last 21 years. It just stays out of discussion because of how late the pick was, and the limited ceiling that comes with most players taken by this point in the draft.