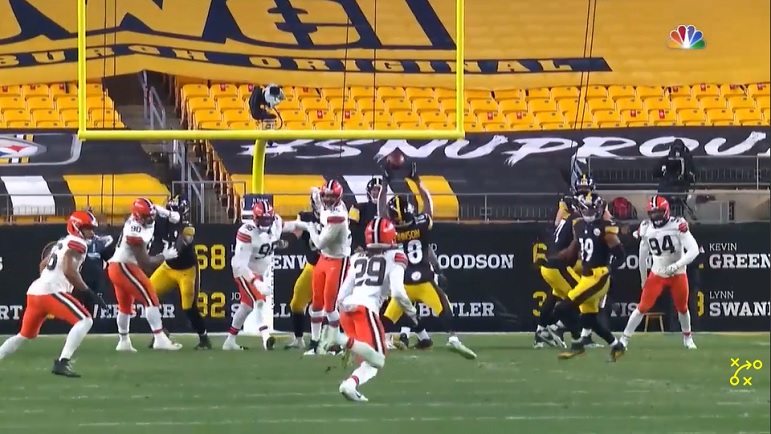 On Wednesday of last week, I did a broad charting and contextualization of all the drops the Pittsburgh Steelers had during the 2020 season, and there were a lot of them. Steelers wide receiver Diontae Johnson obviously had the most not only when it came to the team, but the league as well. On the heels of that full contextualization of the Steelers 2020 drops, I thought now would be a great time to look at Johnson’s drops specifically to see if we could find anything. Doing this will provide a chance for all to be more objective when it comes to a stat that is very subjective.

This series, of which this post is the third part, should include three parts in total with there being so many drops to look at. Let it be known that I am referencing the drop stats from both Pro Football Focus and Sports Info Solutions, and you might be surprised to know that both didn’t agree on a few of these supposed drops we’ll be reviewing in this series.

Johnson had two drops right out of the chute in the Steelers Week 16 game against the Indianapolis Colts, with the first one coming on a quick slant from right to left. While the pass from quarterback Ben Roethlisberger is a little low and out in front of Johnson, this is a throw he must come up with just the same, even if he must dive for it.

This second charged drop to Johnson in the Steelers Week 16 game against the Colts came just two plays after the wide receiver’s first drop. On this drag route, Johnson appears like he may have attempted to sneak a peek at the defender in the middle of the field ahead of him to see if he was going to take a big hit from him. Those two players are on the same level with Johnson running toward the inside linebacker. Regardless, this is a pass that Johnson should have caught.

This next charged drop to Johnson came in the first quarter of the Steelers’ Wild Card loss to the Cleveland Browns. This dig route pass from Roethlisberger to Johnson was high, however. It clanked off the wide receiver’s hands and was then intercepted. While it’s understandable as to why this was ruled a drop by both PFF and SIS, the ball placement by Roethlisberger wasn’t the best. Should Johnson have caught this pass? Probably. This is a tough call overall as for it being a drop, however.

This next supposed drop by Johnson also came against the Browns in the Steelers’ Wild Card loss, and it happened late in the contest. SIS ruled this a drop while PFF did not. It’s obvious that Johnson slipped at the top of his route it and as he got up, he could only manage to get his outstretched right hand on the pass from Roethlisberger. When you look at the end zone view from the All-22 tape of this play, it certainly is hard to saddle Johnson with a drop.

Summary: Now it is time for you all to react to these four supposed drops by Johnson through Weeks 15-18 of the NFL season. How many of them are legitimate drops? How many does Roethlisberger deserve the blame on, if any at all?

I hope you enjoyed this three-part series that focused on looking at the drops by Johnson during the 2020 season.