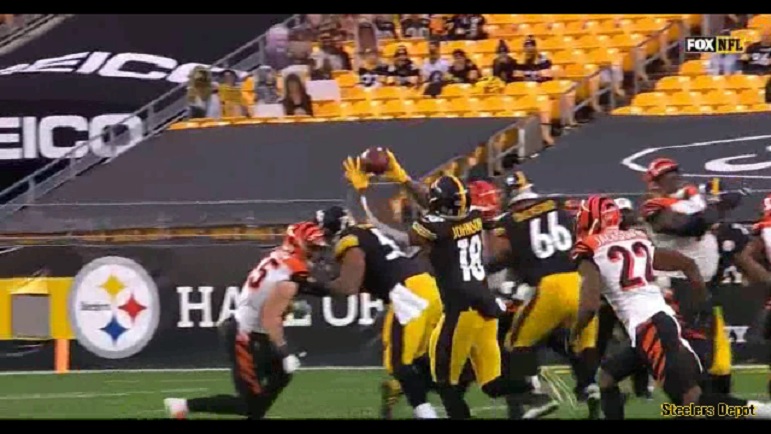 On Wednesday, I did a broad charting and contextualization of all the drops the Pittsburgh Steelers had during the 2020 season, and there were a lot of them. Steelers wide receiver Diontae Johnson obviously had the most not only when it came to the team, but the league as well. On the heels of that full contextualization of the Steelers 2020 drops, I thought now would be a great time to look at Johnson’s drops specifically to see if we could find anything. Doing this will provide a chance for all to be more objective when it comes to stat that is very subjective.

This series should include three parts with there being so many drops to look at. Let it be known that I am referencing the drop stats from both Pro Football Focus and Sports Info Solutions, and you might be surprised to know that both didn’t agree on a few of these supposed drops we’ll be reviewing in this series.

I think most everyone will agree that this pass to Johnson against the Giants in Week 1 should have been caught. It’s a quick slant and Johnson had plenty of separation on the route. The pass from quarterback Ben Roethlisberger was thrown a little out in front of Johnson, but it is still well within what should be his catch radius. There are no real visible signs that Johnson peeked to see if he were about to get hit prior to attempting the catch.

This second charged drop to Johnson came against the Broncos and on a route that has the wide receiver working left to right and toward the middle of the field. While the pass from Roethlisberger did force Johnson to stop on a dime, he still was able to get both hands and his chest on the football. This ball should have been caught.

This next charged drop is a rough and tough call. It’s a curl route with a pass from Roethlisberger that’s to the middle of the field. Johnson seemed to think the pass would be right to him or to his left. The throw forces him to dive back inside via a full extension to make the catch. While Johnson did seemingly get both hands on the football, it still is a tough catch for him to make. Does this one truly qualify as a drop?

This next supposed drop came against the Cowboys and it’s another tough one to score. Not only does Johnson lose his footing at the top of his route, but the pass from Roethlisberger to him is low and to the outside. Once again, Johnson had an opportunity to make the catch, he just didn’t. You would like to see all wide receivers make this catch, but he obviously didn’t. Calling this one a drop is a very tough call.

PFF has Johnson done as having one drop against the Cowboys while SIS has him down for two. The second one from that game is below and once again, it’s another tough call. It’s a quick and short out route by Johnson with the football thrown behind him. Johnson attempted to adjust his body so he could attempt to make the catch, but he ultimately failed in goal to do all of that. If we have learned anything in these first few drop reviews, it’s that Johnson is not a great bad-ball catcher.

This next drop that came in Week 10 against the Bengals is similar to the one the wide receiver had in Week 1 against the Giants. Once again, Johnson had plenty of separation and there really isn’t much in the way of evidence showing him taking his eyes off the football. While the throw is a little high and out front of Johnson, He must catch this pass as an NFL wide receiver.

The seventh and final supposed drop I will include in this post came against the Jacksonville Jaguars in Week 10. SIS has this one as a drop while PFF does not. This is yet another quick inbreaking route by Johnson from left to right. The pass from Roethlisberger is way out in front of Johnson, however, and it looks like he only was able to get his back hand on the football. Once again, you would like to see every NFL wide receiver make catches way away from their body. The fact of the matter is that only a small percentage of them can. As off-target as this pass is, it’s not surprising that Johnson didn’t catch it. It’s very tough charging Johnson with a drop on this play, in my honest opinion.

Summary: Now it is time for you all to react to these seven supposed drops by Johnson through the first 10 weeks of the NFL season. How many of them are legitimate drops? How many does Roethlisberger deserve the blame on, if any at all?