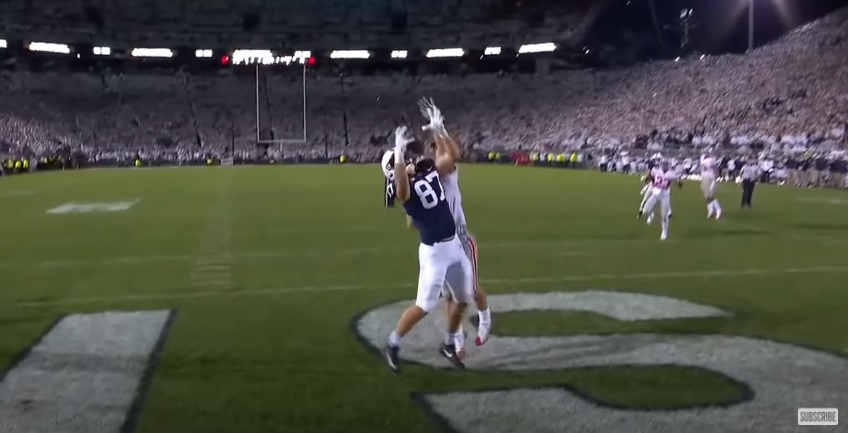 With the 55th selection in the 2021 NFL Draft, the Pittsburgh Steelers selected Pat Freiermuth out of Penn State. Freiermuth was widely regarded as the #2 TE prospect in this year’s draft class, yet wasn’t often the first choice of many Steelers fans in regard to players left on the board when the team made their selection. Many would have thought a C, OT, or possibly CB would have been in play at #55, but Pittsburgh sent in the card to select Freiermuth, a player that they had their fingerprints all over during the pre-draft process.

Previously, I conducted a film room session analyzing Freiermuth as a run blocker. Today, I’m dedicating this film room to Freiermuth’s ability to win contested catches. Freiermuth boasts a large frame and large catch radius for the TE position, having the size and height you look for in a traditional “throwback” TE. Below are Freiermuth’s listed measurables from his Pro Day, as well as other TEs that will be highlighted in this film analysis for context.

Alex Kozora has often referenced arm length as a critical factor for the Steelers when drafting TEs, often preferring them to have long arms over 33”. Freiermuth comes underneath the bar there, measuring in at 32 1/2”. However, this wasn’t too short to be a deal breaker.

Let’s dive into the film. Now what we can see initially when popping in the tape is that Freiermuth is most comfortable working in the shallow portions of the field near the LOS or over the middle of the field at the second level of the defense. He does a great job using his size and mass to shield defenders off as the ball travels to him and basically box them out like a power forward getting a rebound underneath the bucket. Here against Nebraska, we see Freiermuth run a hitch concept just past the line to gain and wall off the defender with his back, bringing in the ball and holding on when contact comes, being able to fall forward for a could extra yards.

What I love to see from Freiermuth is when he gets up in close quarters with a defender and uses his body and momentum to run him backward to create natural separation out of his route when he makes his break. We see that as Freiermuth aligns on the right side of the formation in the slot and runs the inside breaking pivot route, getting into the defender and basically pushing him back, getting him off of his frame and creating a couple yards of separation to get open for the pass. He hauls in the ball and gets a big shot from the safety coming downhill, but manages to secure the grab to move the sticks.

We see examples of Freiermuth using his body to naturally seal off defenders in coverage on these next few clips against the Buckeyes and Terrapins, keeping the cover man on his back pocket as he gets inside leverage on his route and brings in the catch with the defender contesting the throw.

In these instances, we see Freiermuth’s ability to win in contested catch situations, but we also see his struggle to create ample separation. He isn’t the quickest or most explosive athlete in the open field, and he can stand to do a better job of dropping his hips and not rounding off his breaks in order to have cleaner cuts on his routes. For example, on this play against Maryland, Freiermuth relies too much on trying to get into the body of the coverage man and ends up stalemating each other.

However, he gets lucky the defender holds him down the field, drawing the yellow flags as he then commits to the scramble drill and eventually makes the diving catch coming back to the sideline. However, Freiermuth wasn’t able to generate any separation and makes the passer have to deliver and accurate strike to get the ball in there. It works out here and Freiermuth makes a good play, but Ben as his QB can’t run the Chinese fire drill like he used to at his age and will likely resort to go to another option instead of hoping Freiermuth breaks open after running around for five seconds or more.

We do occasionally see some concentration drops across Freiermuth’s film as he hears footsteps. While he never dropped a red zone target during his time at Penn State via Pro Football Focus, he does need to be more consistent at snatching the ball with his hands and securing the ball through the process of the catch. Great example here as Freiermuth breaks to the outside to the left sideline and rounds off his route considerably, giving the defender more time to react and contest the pass which Freiermuth fails to bring in. He tries to body catch the ball with the hit being low, but should have used his hands more to secure the grab with contact imminent.

However, later in the same game, Freiermuth hauls in nearly the same grab he dropped earlier on the same route concept. Again, I would like to see him leverage his route better on top of the defender or get a cleaner cut to the outside, but he still manages to bring in the ball falling to the turf.

Now Freiermuth’s film wasn’t heavily littered with these above the rim, jump ball catches that we like to associate with contested catch situations. His size, height and strong hands do prove to be a great asset, though, in the red zone when targeted down there. On this play against Michigan last year, we see Freiermuth line up in the slot on the right side of the formation. He runs the wheel route to the sideline, getting a step on current Washington Football Team LB Khaleke Hudson and bringing in the catch over the shoulder in the back of the end zone. This play shows good concentration of the football in the air and the ability to reel in the catch in-stride for the score.

Now here are a couple clips of a pro comparison I like to use for Freiermuth: New Patriots TE Hunter Henry. As you can see above, both players have nearly identical measurables. Henry has slightly longer arms but Freiermuth wins in the hand size. Both players are considered good yet not great athletes for the position. Both use leverage and their size to win over the middle. We see a similar diving catch made by Henry here as we have seen by Freiermuth in the clips above, running the scramble drill and coming down with the catch with the defender on top of him.

This play shows Henry using his size as an asset to push the defender back when getting into his chest, then breaking back inside to create separation like Freiermuth did on a couple clips above. Now Henry does a better job separating out of his break than Freiermuth does, getting a couple yards of separation when breaking inside. Should Freiermuth improve this facet of his game and show more explosiveness coming out of his routes, it will only help his abilities as a chain-mover over the middle as Henry has become in the league.

Now I have Heath Miller listed above not to compare him directly to Pat Freiermuth, but rather what Freiermuth’s role likely will be in the receiving game in Pittsburgh. He has a ways to go to become the blocker Miller was. As a receiver, I do see similar skill sets. Both players have similar body types and are not the athletes to run away from coverage consistently. Miller won by finding the soft spots in zone coverage and using his body to create leverage on his routes much like Freiermuth does. Now Freiermuth needs to get stronger and savvier out of his breaks. But he plays a similar game to Miller as the “throwback” style TE the Steelers have stated that they are looking for that can win over the middle.

Miller came up with a lot of big-time grabs while being willing to take the hits over his career in black and gold. The jury is out yet on Freiermuth. But given what he has showcased in college and the skill set and measurables he brings to the pro game, I can see him filling that role Miller and Henry provide as a gladiator over the middle that can move the chains.