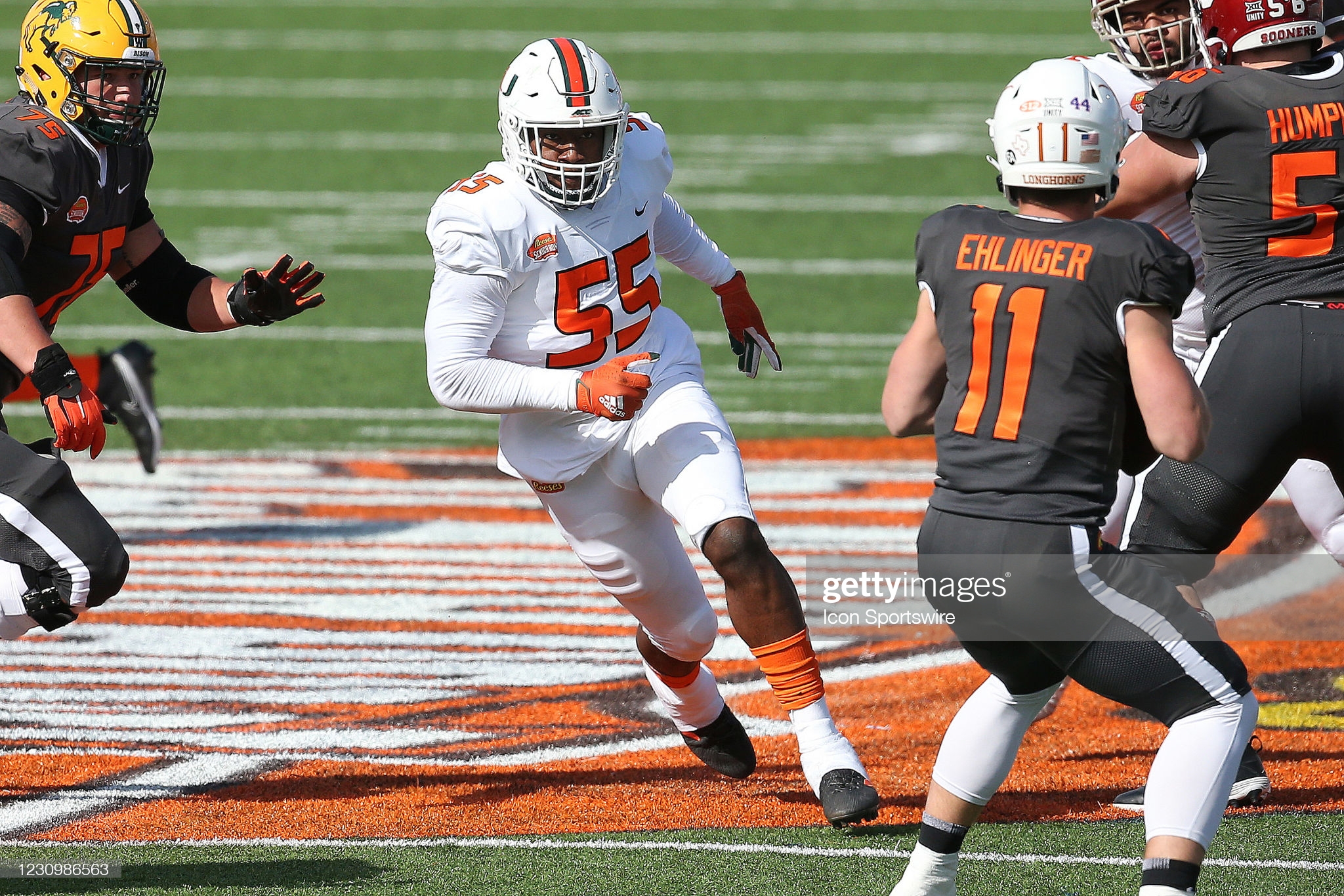 With the 216th overall pick in the 2021 NFL Draft, the Pittsburgh Steelers selected Miami (FL) edge rusher Quincy Roche. Roche and the Steelers’ other eight picks could be packaged up into one quick, overall grade. But why not take a detailed look at each individual pick from a number of different viewpoints, before determining a final grade for the player, and later on the entire class?

Pittsburgh was perilously thin at edge rusher following the expected departure of Bud Dupree. T.J. Watt covers one side of the line. Second-year Alex Highsmith steps in to replace Dupree on the other, leaving the team’s only depth Cassius Marsh, who has bounced around as a backup and practice squad player. After Marsh, it’s some signings from the Pro Day circuit. Pittsburgh didn’t need a starter at the position, but absolutely needed a rusher that can be an upgrade to all those options, and become the primary back-up.

The fact that Roche has been compared to Highsmith already in more than just frame (they are a couple pounds apart) shows that the Miami man is someone who fits what Pittsburgh likes to do on the edge. That one of his biggest strengths is his ability to win with his hands, and that he has some athleticism to back up his pass rush plan (which is consistently improving) only help his case as a fit. He just has to channel that athletic ability more and hit that higher gear in the NFL (while refining his plan to beat NFL tackles), and Roche is what Pittsburgh wants in an edge rusher. Though he is a bit undersized (6025) in terms of height.

As promising as Roche is, he is not the immediate starter. Pittsburgh drafted Highsmith in the third last year as a starter-in-waiting to replace Dupree, and the promise Highsmith showed after Dupree was injured earned him the chance to start full-time opposite Watt. Roche will get his looks, though. It’s Highsmith’s first year starting, so Roche will spell him during games. His speed will get him on the special teams unit. And if any injury happens to either starter, Roche should fill the role Highmsith did with Dupree, and jump full-time into the lineup.

It’s tough to project this one. With Highsmith just stepping in, Roche would have to beat him out for a starting job his first couple seasons. It’s not impossible — both profile similarly and bring starting upside to the position. Even if Roche fails to win a starting job over the next couple years, he is a good enough rusher to see the field on snaps throughout games, and stay a contributor on special teams. And in case of injury, he provides an insurance policy with considerably more upside than most back-ups.

You can some of Pittsburgh’s picks as potential steals. But there is no question which selection represented the most value and biggest steal for the Steelers. Roche could have gone in the fourth round and it would have been a good pick for most teams. He carried top 100 ratings on multiple big boards, and rarely fell out of the top 150 on anyone’s. Add in his upside and the ability to produce he showed on some reps at the Senior Bowl, and it is a wonder he fell this far, especially with some of the names going in front of him. Excellent drafting by Pittsburgh here.

Roche was unquestionably the best edge rusher remaining on the board at the selection. For Pittsburgh’s scheme, and overall. You could try to make a case for Shaka Toney (Penn State) or Jonathon Cooper (Ohio State), but Roche played better than both at the Senior Bowl. Regardless of position, Roche stands out as one of the best left on the board. Trey Smith (OG), Kary Vincent Jr. (CB), and Toney are the only names I look at and pause for a second. Smith is the only one I think I might pick over him. But it is fair to say that Pittsburgh took the absolute best player remaining in the sixth round. And if you do an even balance of best player available and team need, rather than going strictly BPA, this is a no-doubter.

There is nothing to criticize about this pick so late in the draft. Pittsburgh found a steal who was valued much higher, filled a team need, fit the team’s scheme, and brings the upside to imagine as a productive starter one day. Not only that, but they did so without passing on a player who in any way could be definitively expected to bring more to the organization. This pick could have received positive grades in the late fourth round. In the sixth, it is one of the best selections made league-wide on Day 3.