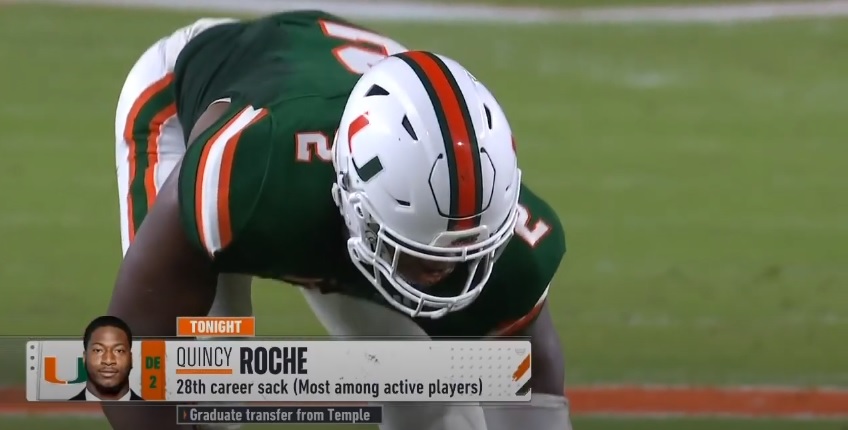 In today’s game with the pass heavy offenses you can never have too many pass rushers.

There is no physical blueprint to follow to find pass rushers. They come in all shapes and sizes. T.J. Watt has increased his sack totals in every season, and he is 6’4” and 252 pounds. His brother J.J. has over 100 sacks and he is an inch taller and weights closer to 290 pounds. Aaron Donald is changing the game from the inside and is 6’1” and 280 pounds. There are many ways to get after the passer. Some win with speed, some with power, and some with technique and some use a combination of them all. There is a true artistry to being effective.

The classic arts include genres like painting, sculpting and musicianship. Like pass rushing, there is no blueprint to find the best artists. However, the classical artists and pass rushers have something in common. They all need to be good with their hands.

While watching Quincy Roche before the draft, this trait was one that popped out that I would like to focus on in this article. Between his time at Temple and his year at Miami, Roche totaled over 30 sacks. Part of his success was the way he used his hands. I watched his games from 2020 and chose some of his tricks of the trade to highlight.

Against UAB, Roche is on the left side of the screen and will chop with both hands to attempt to get the blocker’s hands down. Then he dips and rips with the inside arm to get under the left tackle to get the pressure.

Against Florida State, he is on the opposite side and will use stab or long arm to the inside shoulder of the right tackle to get under his pads and get him off balance.

At Clemson on the right edge, he will use the double chop and connect with the left tackle’s hands, getting him to fall forward.

Against Virginia facing off with the left tackle, he tries a chop/arm over and counters with a spin and swinging his right arm into the back of the tackle as if holding an ice pick to push him further upfield to get the pressure.

Facing Virginia, again against the left tackle, he reacts to the overset by the tackle by darting inside and using a double swipe with a right arm rip.

At Duke, when the left tackle punches with his hands, Roche is able to catch both hands and spread the arms of the blocker. It’s hard to block someone with your hands outstretched to the sides. He was able to do this a few times in this game.

Inside Club Arm Over

Playing Pittsburgh on the right side, he starts the rush up the outside, reads the overset from the tackle, and then quickly redirects to the inside, clubbing with his left arm and bring his right arm over the blocker.

At Louisville, he will fake a stab with his left hand and then turn it into a rip with the same arm to get around the left tackle.

As you can see, Roche has a lot of tools in his arsenal when rushing the passer. How he uses his hands is just a part of the process. He mixes it up inside and outside, and it looks like he has good mental processing reading the blockers and being able to adjust on the fly.

Landing in Pittsburgh seems to be a golden opportunity for him with the lack of depth on the roster. They will probably look to add a veteran before the season starts, but Roche could easily find himself as OLB3 when camp breaks.