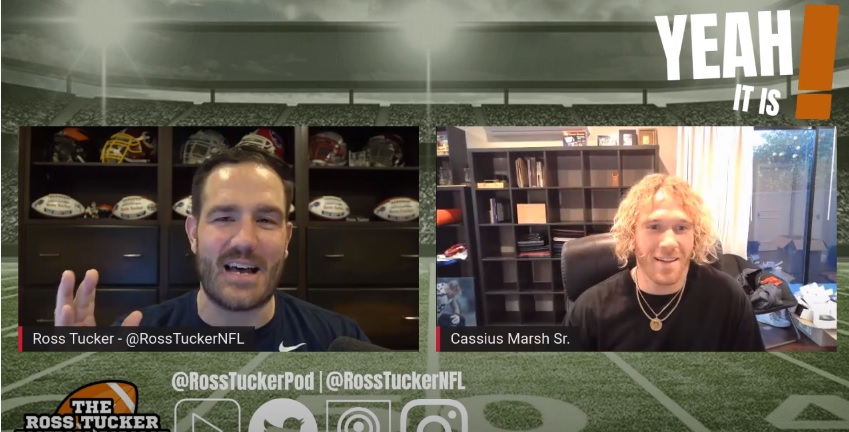 Cassius Marsh has had a bumpy NFL career, bouncing around from team to team trying to find his footing in one place. He hopes his final stop will be in Pittsburgh, the team who plucked him off the Indianapolis Colts’ practice squad midway through last season. And he believes whatever team realizes his ability as a pass rusher will be the one who decides to keep him.

Marsh joined Ross Tucker and The Ross Tucker Football Podcast to discuss his NFL journey and what he believes are his best traits.

The Seahawks selected Marsh in the fourth round of the 2014 draft. Since then, he’s spent time with five other teams, the Steelers being number six. In 92 career games and nine starts, Marsh recorded 14 sacks, including 5.5 of them in 2018 with the 49ers. But he’s never been able to find traction with one team, and says some organizations have given him a raw deal.

“I’ve just had a tough time with like situations that I’ve come. Bad deal with San Fran, letting me go after two weeks of free agency. I had a career year, six sacks with them, the second-best pass rusher on the team. And that was kinda rough for me. And then went to Seattle and that was awful. They did me super wrong. Released me after I was the starter all offseason, which, I’m no too sure about that situation.”

As Mike Tomlin and the Steelers like to say, they don’t care how you got here. Just that you’re here and you produce. Marsh is right in saying his best traits are special teams value and some level of pass rush ability. But his biggest question is a crucial one — run defense. Marsh hasn’t set a strong enough edge in the NFL, something notable last year with the Steelers. He and the Steelers’ front seven were carved up against the run late in the season, especially in their Wild Card loss to the Browns. Nick Chubb and Kareem Hunt averaged 4.8 yards per carry. Hunt found the end zone twice on the ground while Chubb hit paydirt through the air.

To be fair, judging him off what he did in 2020 should come with an asterisk. It’s not easy for any player to latch onto a new team midseason, jumping on a moving train speeding downhill. Pandemic-related difficulties only compounded that problem. This offseason will offer Marsh stability and the chance to start the season from the ground floor. Given the lack of depth the Steelers currently have at EDGE, he’ll certainly have the opportunity to log playing time behind T.J. Watt and Alex Highsmith. Marsh will battle sixth-round pick Quincy Roche for rotational snaps.

In a recent interview with OSDB Sports, Marsh confirmed that’s the chance he’ll have this summer.

“I’ll be competing for a rotational pass rusher position, and you know, that’s the third outside backer, but I’m going in with the intention to do whatever the team needs me to do- special teams roles, defensive roles … I pretty much go into every season with the same mindset. When I get an opportunity to make plays and help the team, that’s what I do. Whatever role the Steelers need me for is the role that I’ll play.”