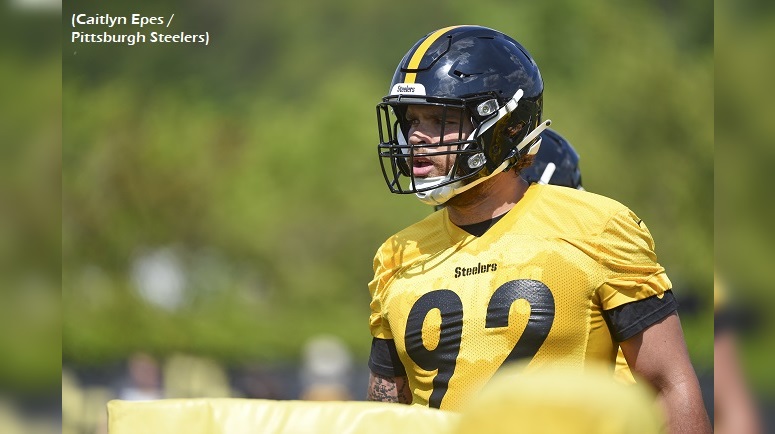 The Pittsburgh Steelers trading up into the fifth round of the 2021 NFL Draft to select Wisconsin defensive end Isaiahh Loudermilk was a bit of a surprise to most. That said, Loudermilk does fit what the Steelers look for in defensive linemen and especially from a measurable standpoint. Loudermilk is now going through his first set of OTA practices with the Steelers this week and in doing so, that gives his fellow defensive linemen teammates a chance to get an initial impression of the young draft pick.

On Thursday, veteran defensive lineman Tyson Alualu addressed the media after the teams OTA session and during his interview he was asked about Loudermilk and what his first impressions are of the Wisconsin product and how he thinks it’s going for him so far.

“It’s been good,” Alualu said. “I mean, just of right now he’s just kind of being observant – I know we’re just doing a lot of drills now, but how they move. And I like what I see. You can see that he’s a very aggressive player and kind of to me, similar to, you know, Cam [Heyward] and [Chris] Wormley. He kind of has that combination. So, I think he’s in good hands kind of learning behind them, seeing how they practice, how they go through drills. But it’s looking good for him.”

As the rest of the Steelers offseason progresses it will be interesting to see what progress Loudermilk makes. With the Steelers trading up for him this year one would think his odds of making the final 53-man roster are strong.

More than anything else when it comes to Loudermilk as he closes out his first set of OTA practices with the Steelers this week, he seems to be leaning on the experience of those veteran defensive linemen in his room that are now his new teammates.

“He’s asking the right questions out there, putting in work, Alualu said of Loudermilk. “So, we like what we see.”