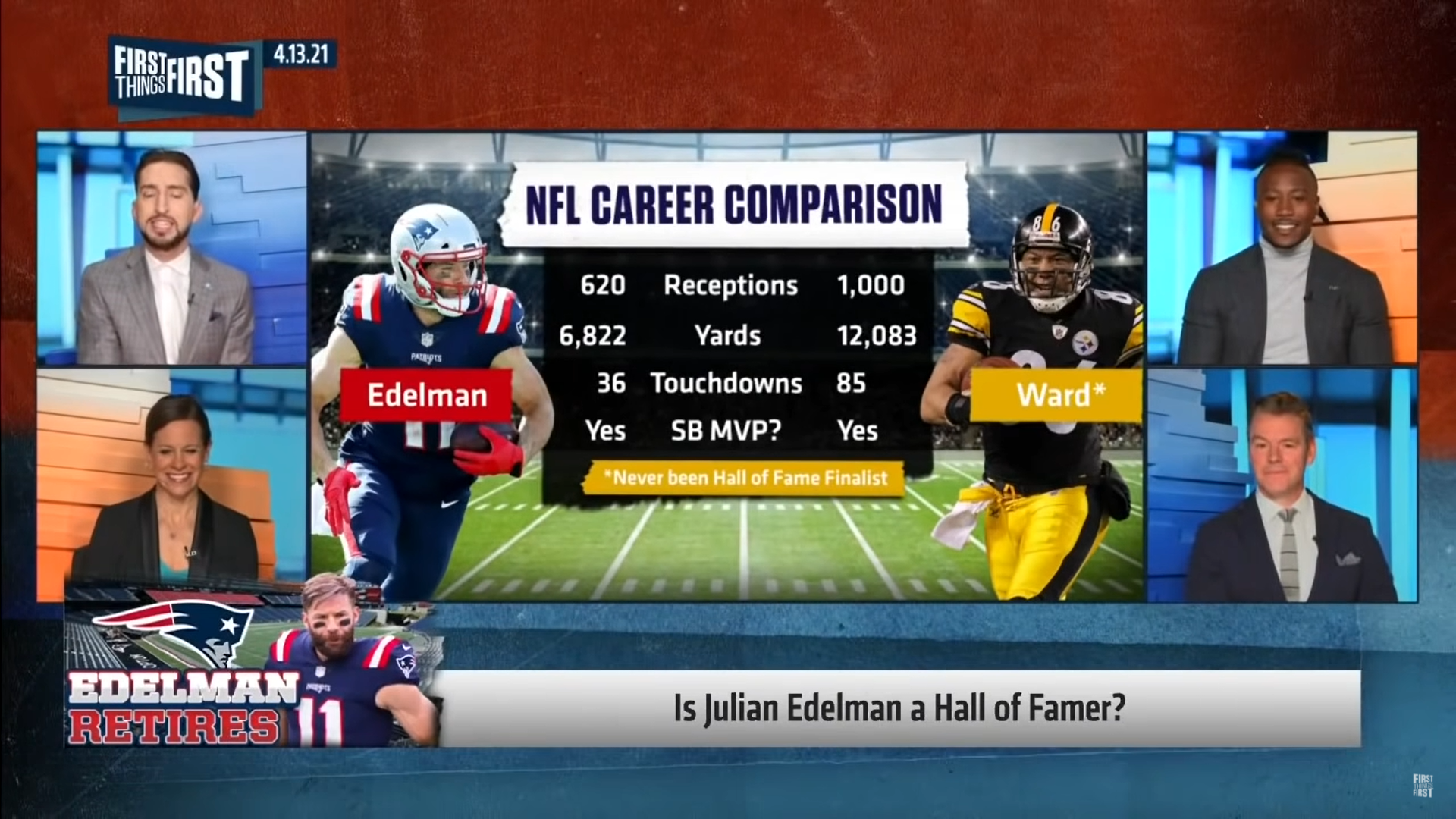 The single most ridiculous thing that I have seen over the course of the past week, in spite of its inevitability, was the renewed debate over whether recently-retired former New England Patriots wide receiver Julian Edelman deserves a place in the Pro Football Hall of Fame in Canton, Ohio.

The answer is, of course he doesn’t. For somebody who literally just retired days ago, he ranks 75th all-time in receptions with 620, 156th in receiving yards with 6822, and tied for 261st in receiving touchdowns with 36. He has three 1000-yard seasons in 11 years. He has never caught more than seven touchdowns in a single season.

The debate naturally stirs up arguments and comparisons, a common one being with former Pittsburgh Steelers wide receiver Hines Ward, who has been brought up frequently in the past couple of days. He came up via Nick Wright on the Get Up program on ESPN.

“There’s a little shy, and then there is one guy who basically doubled the other guy’s production”, he said in comparing the numbers of the two. “Hines Ward might not get in, and I would argue, probably shouldn’t. Edelman doesn’t live in the Hines Ward neighborhood”.

And he’s completely right. Hines Ward probably doesn’t quite make the cutoff for the Hall of Fame. And Julian Edelman isn’t anywhere close to Hines Ward. Just not in the same neighborhood, not in the same area code. Wright rightly compared his production to the likes of Deion Branch, Wayne Chrebet, and Santonio Holmes, two of the three having also, like Edelman, been Super Bowl MVPs.

“Where was this for Santonio Holmes? Guys, I’ve thought about it…Santonio Holmes is a Hall of Famer”, he joked. The Hall of Fame caampgain for Holmes “didn’t exist. This is the Patriots propaganda machine, which is forcing us to come down on Edelman on his big day when we really shouldn’t be. But it’s because the numbers have to matter”.

And he’s absolutely right about the forced conversation. Debating upon Edelman’s Hall of Fam candidacy is a disservice to his career, because while it quite obviously does not stack up and measure up to the standard of admission, he had a very fine career worth celebrating.

To his credit, it was the postseason in which he stood tall. He ranks second only to Jerry Rice in career postseason receptions with 118 in 19 games (Ward is fifth, by the way), second in receiving yards with 1442 (Ward is eighth), and…tied for 46th in touchdowns with five (Ward is tied for fourth with 10).