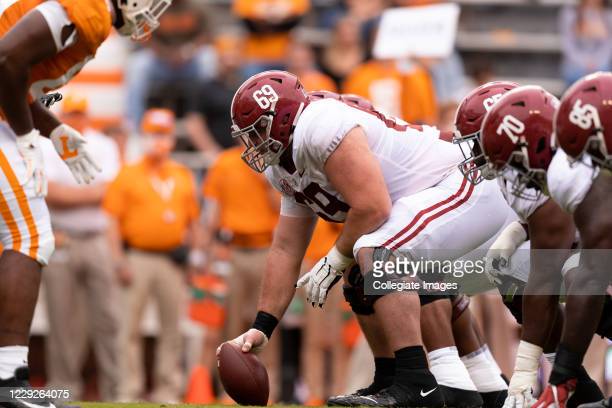 If we assume Monday’s Tony Pauline report is true, the Pittsburgh Steelers have circled three names on their draft board: Alabama RB Najee Harris, Alabama C Landon Dickerson, and Oklahoma State OT Teven Jenkins. Put aside the concerns over Harris’ positional value, Dickerson’s CVS-receipt of an injury history, and where Jenkins would fit if he was the pick.

All three guys share one common thread. A message, a goal for the Steelers’ offense.

That deficiency is obvious to anyone who watched Pittsburgh last season. The line didn’t get a push. The backs couldn’t churn out the tough yards. They sucked in short-yardage situations and they were rarely the more physical team.

This offense doesn’t get better unless that problem is solved. And all three accomplish that. Harris is a big, tough runner capable of creating on his own, even if he didn’t have to consistently in that great Alabama offense. Dickerson is a classic butt-kicker who plays with the nasty demeanor that was missing on the O-line in 2020. The only lineman more nasty than Dickerson might be Jenkins, whose tweets should let you know what kind of old-school personality the Steelers would be getting.

We can and will spend the offseason talking about Matt Canada’s new ideas for the offense. If he’ll add more pistol, if he’ll run more jet sweeps, more motion. But none of that matters unless the Steelers can solve their core problem: Winning up front. That makes anything and everything else you call on offense easier. You’ll stay out of second and long, you’ll win the four-minute offense, you’ll put yourself in situations where the whole playbook is open. Instead of what happened last year, where it felt like only a limited menu of the playbook actually worked.

Look at the Ravens. One of the best rushing attacks in football. They have speed aplenty, Lamar Jackson at QB, J.K. Dobbins at RB. But they’re just as tough and nasty up front with guys like OT Orlando Brown Jr., FB Patrick Ricard, and TE Nick Boyle. Similar story in Cleveland. Their run game torched Pittsburgh’s front seven in the Wild Card game because they won the line of scrimmage. They were the more physical team.

Taking any of those three reported players gets you one step closer to that goal. And it should be a reflection of how they address the offense the rest of the draft. Whether that’s with someone like Quinn Meinerz sometime on Day 2 or even someone like Robert Hainsey, far from the most talented player in this class but a prototypical tough guy who will bring energy up front.

The Steelers have been introspective enough to know their weaknesses. And they’ve been honest about it. New offensive line coach Adrian Klemm basically called out the 2020 unit, saying they weren’t a physical enough group. Identifying the problem is halfway to fixing it. By the end of next week, expect the Steelers to put that plan in action.